Amber Barrett hoping Ireland can do a Tipp against Germany 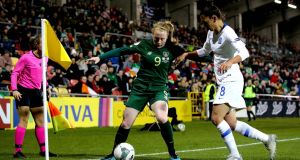 Amber Barratt in action for Ireland against Greece in March. Photograph: Ryan Byrne/Inpho

Needing a win against the second ranked team in the world, who have scored 37 goals and conceded none in their six group games so far, would suggest that Ireland need something of a miracle when they meet Germany in Tallaght next Tuesday in the final fixture of their Euro 2022 qualifying campaign.

Amber Barrett, though, is quick to point out that she can draw on very recent examples of sporting miracles to inspire her. “If you said last week that Cavan and Tipperary would be provincial champions, you would have been laughed at,” she says, “so things like that do happen in sport.”

Mind you, she’d prefer to draw her inspiration from Tipperary’s triumph rather than Cavan’s, their victory over her native Donegal, for whom she played Gaelic football before focussing on soccer, still stinging.

“So we’ll use the Tipp game as motivation, not the Ulster final,” she laughs. “That was their first Munster title in 85 years and at the start of the season nobody gave them a hope. If you’re being realistic, it’s Germany every day of the week, but we’re hoping that Tuesday isn’t your average day of the week.”

Ireland’s defeat by Ukraine last month left them in miracle-requiring territory, the likelihood of Ukraine finishing their campaign on Tuesday with a win at home to bottom-of-the-group Montenegro meaning that nothing less than a victory over Germany will do if Ireland are to hold on to second place and earn a spot in the play-offs.

No more than for the team itself, it’s been a frustrating campaign for Barrett who has started just one of the seven games when she opened the scoring a year ago in Athens, only for Greece to get an injury-time equaliser. She’s been an unused substitute in three more of the games, coming on late in three more.

There was plenty of head-scratching last month when manager Vera Pauw left it until the 86th minute to bring on Barrett when Ireland were in desperate need of an equaliser against Ukraine, not least because she has been the form Irish striker so far this season. She has scored in all four of her appearances for FC Köln, three in the German second division and another in the cup.

Barrett, though, defends Pauw, while admitting that being brought on so late doesn’t give you much chance of getting to the pace of the game. “Vera didn’t speak to me individually about it, but I think it was very clear. We had discussed that if we were going in to the last 10 minutes looking for a goal, Louise [Quinn]was going to go up front and we’d see how it played out. It was one of those where if we had gotten a goal out of it, nobody would have looked. But the fact that we didn’t score out of it, people were questioning the decision a little bit.”

“Of course as a striker you want to play from the beginning, when you come on in the last five, 10 minutes it’s difficult to get up to speed, especially with Ukraine playing so deep at that stage, they were just shutting up shop. But Vera doesn’t need to explain her decisions to me, we’re all professional and respectful of what happens in the game, it wasn’t something that needed to be clarified to me.”

While she might have some work to do to persuade her international manager that she’s deserving of more game time, she has established herself at Koln, who she joined in the summer of last year. Her debut season ended in relegation, but she was given a new one-year contract in August and her goals have helped give the team a perfect start to the new campaign, putting them on track for promotion.

“I think over the last 12 or 14 months I’ve improved in leaps and bounds. I put that down to being in a professional environment, training every day, twice a day, playing with and against top players. You just have to be a little bit quicker, that little bit sharper.

“It’s funny how confidence works. In the last couple of games of pre-season I wasn’t really ticking all the boxes, and I had a couple of poor enough training sessions. But then I scored in our first game and suddenly the confidence lifts. The belief is there again. When the ball falls to you and you have that confidence, you put it away.”

Mother of all challenges

While there are no Köln players in the German squad, Barrett has come up against several of them while playing for her team, as have defenders Diane Caldwell (SC Sand) and Claire O’Riordan (MSV Duisburg). And even though Germany will be without some of their bigger names, among them Wolfsburg pair Alexandra Popp and Pauline Bremer, she’s familiar enough with the quality of those who will make up Tuesday’s team to know Ireland face the mother of all challenges.

“With them already qualified it would be great to think they mightn’t have their usual edge, but with the players involved I know that’s not going to be the case. And even if they play their so-called second string players, they are still capable of playing for 90 per cent of the other countries in world football - their bench could arguably start for other countries. They won’t allow themselves to drop their performance levels. Knowing the Germans, they won’t accept anything but the best.”

For now, the 24-year-old is focussed on training hard ahead of the game in the hope of winning her 20th cap. The chances?

“Well, I’ve been leaving Vera a few 50 euro notes on the table at breakfast, so hopefully that does the job. We all want to play.” And they all want to do a Tipp. (And, whisper it, a Cavan).