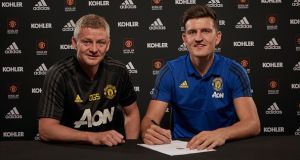 Manchester United made Harry Maguire the most expensive defender in the world. Photograph: Getty Images

Whisper it but Arsenal have completed a transfer window more or less to their satisfaction. Nicolas Pépé and Kieran Tierney are signings of the right age and profile who should provide incision from the flanks while David Luiz’s arrival is a curveball but, after Laurent Koscielny’s unsavoury departure, makes sense from a leadership perspective. If Dani Ceballos settles they have a potential star on their hands and Alex Iwobi’s departure means the books have been balanced. Nick Ames

For the pessimist, Villa’s £146m spend on 13 new signings might summon memories of the trolley dash Fulham embarked upon last year. But Dean Smith has done enough to earn some trust and a more positive slant is that Villa have set themselves up for a return to where they believe they belong, among the division’s established teams. Wesley Moraes, Trezeguet and Jota should enliven their attack while Douglas Luiz looks a very smart addition. NA

It has been a satisfying summer for Bournemouth, with Eddie Howe improving his squad with the arrivals of Philip Billing and Harry Wilson, on a season’s loan, the most eye-catching. But tying down Callum Wilson to a four-year contract was arguably Bournemouth’s best piece of business, with Nathan Ake and Ryan Fraser also sticking around. Injuries to David Brooks, Lloyd Kelly and Dan Gosling have dampened enthusiasm but they look ready to build on last season’s 14th place. Ben Fisher

Graham Potter’s task at Brighton has been considerably eased by a flurry of signings across the past week. The arrival of Neal Maupay, Aaron Mooy and Adam Webster from Brentford, Huddersfield and Bristol City respectively, strengthens the spine of a team who had gone stale under Chris Hughton. Coupled with Leandro Trossard, who has shown glimpses of class in pre-season, Potter has plenty of ammunition, including Alireza Jahanbakhsh and Jürgen Locadia, who have so far underwhelmed on the south coast. BF

Losing Tom Heaton for £8m to Aston Villa was a blow for Sean Dyche, even with the England goalkeeper in the final year of his contract at Turf Moor, but if the aim of any transfer window is to finish with a stronger squad then Burnley can be satisfied. The deadline day arrival of Danny Drinkwater from Chelsea brought yet more Premier League experience following Jay Rodriguez’s return to his boyhood club and the signing of Erik Pieters from Stoke. A solid summer. Andy Hunter

While Mateo Kovacic and Christian Pulisic arrived early, Chelsea had flown under the radar until the late drama of David Luiz’s £8m move to Arsenal. The club’s transfer embargo has forced Frank Lampard to turn to the academy to refresh his squad – he has not been able to spend the funds generated by Eden Hazard’s move to Real Madrid – and the focus has been on outgoings, with Danny Drinkwater loaned to Burnley on deadline day. Davide Zappacosta and Tiémoué Bakayoko could also depart before the European transfer windows shut later this month. Jacob Steinberg

With only £6m spent on players after the £45m sale of Aaron Wan-Bissaka, the news that Wilfried Zaha is staying at Selhurst Park was crucial for Palace’s chances this season. But with Zaha having made no secret of his desire to move on, reintegrating the forward back into the squad could be tricky for Roy Hodgson but Palace will hope Zaha can return to the form that helped them survive relegation with ease last season. The pressure is on Christian Benteke to deliver goals in the last year of his contract. Ed Aarons

A productive, well-planned window came to something of a haphazard end with attention switched late to Alex Iwobi after the thwarted pursuit of Wilfried Zaha and the priority of a new central defender going unresolved. Other key areas were addressed by signing players with title-winning experience in Spain, Italy and England. The damaging departure of Idrissa Gueye was covered swiftly and over 20 players were removed off a previously soaring wage bill. AH

Leicester got a good fee for Harry Maguire but the deal did not leave them enough time to buy a replacement so there are question marks in central defence, where Jonny Evans will need to stay fit and either Caglar Soyuncu or Filip Benkovic will have to step up. Elsewhere, they have recruited well. Securing Youri Tielemans on a permanent transfer was a coup, his compatriot Dennis Praet could contribute more goals from midfield and Ayoze Pérez is a shrewd addition to the attack. Paul Doyle

Jürgen Klopp always said this window would be quiet for Liverpool, with the club having invested heavily in signings last year and lucrative contract extensions subsequently, but just how quiet was a surprise given their position of strength as European champions. The only senior addition was the goalkeeper Adrián on a free transfer as a replacement for Simon Mignolet, while Sepp van den Berg, 17 and Harvey Elliott, 16, were acquired for the future. AH

Pep Guardiola lamented that he “could not afford” Harry Maguire after the Leicester centre-back joined city rivals United but the Manchester City manager has reasons to be pleased with this summer window. Rodri looks like an excellent signing and will allow Fernandinho to have a breather (or play in defence) every now and then, while City look to have had the better out of the João Cancelo-Danilo swap deal despite paying Juve £30m as part of the arrangement. Marcus Christenson

At some points during the summer it threatened to turn into quite a positive window for United and Ole Gunnar Solskjær but in the end there was a sense of deflation. True, Harry Maguire has joined for £80m and Aaron Wan-Bissaka for £45m but the midfield needed more than Daniel James and the squad is now light up front with Romelu Lukaku leaving. United were interested in signing Paulo Dybala but that proved too expensive – but the main question is: why leave it so late? It’s another window Ed Woodward has not come out of well. MC

Newcastle’s refusal to sell Sean Longstaff – one of England’s finest young midfielders – to Manchester United arguably represents their best business decision this window. If investing around £60m on Joelinton and Allan Saint-Maximin seems a gamble from the new manager Steve Bruce at least they bring much needed pace. Meanwhile Andy Carroll – when fit – will add a new atttacking dimension to a squad who have been well reinforced in both full-back positions. Louise Taylor

Norwich’s best business was securing a series of young (and not so young) talents to new contracts. Second best was probably the signing of the defensive midfielder Ibrahim Amadou on loan from Sevilla, the one position where a starting XI option was desperately needed. Cover at goalkeeper, right-back and centre-forward has also come in, with the winger Patrick Roberts a wild-card loan deal from Manchester City. Paul MacInnes

The Blades will be delighted with their work over a summer in which they broke their transfer record four times in as many weeks. Luke Freeman was the first, swiftly followed by Callum Robinson, Lys Mousset and finally £18m Oli McBurnie. That means they have strengthened exactly where the side needed it – in attacking areas. A deadline day move for Everton’s Mo Besic adds a bit of snarl in midfield when required. John Ashdown

Southampton needed to clear the dead wood this summer but doing so has proved easier said than done. Charlie Austin has departed but high-earners have reduced Ralph Hasenhüttl’s capacity to upgrade his squad sufficiently, with Fraser Forster and Guido Carrillo among those dispensable players eating up the wage bill. Che Adams looks a steal at £15m and Moussa Djenepo, a raw winger, should stimulate supporters but as one deadline closes all eyes are on the European deadline on September 2nd by which point Saints hope to have offloaded Mario Lemina. BF

After two windows of inactivity, Spurs made up for lost time with the late arrivals of Ryan Sessegnon and Giovani Lo Celso on deadline day but failed to secure an audacious move for Paulo Dybala and find a buyer for Danny Rose. There are still concerns over a lack of cover at right-back following the sale of Kieran Trippier to Atlético Madrid but Mauricio Pochettino will still feel he has improved the squad who reached the Champions League final last season. Now to win a trophy perhaps? EA

A flurry of late activity during which Watford completed deals for Danny Welbeck and the Senegal forward Ismaïla Sarr has given supporters hope of at least emulating the team’s exploits under Javi Gracia last season, although the failure to sign Danny Rose from Tottenham at the last minute was a slight setback. Nonetheless the potential of Sarr and the Nigerian teenager Tom Dele-Bashiru should give cause for optimism for the future, as should keeping hold of their most crucial performers. EA

It has been a decent summer for Manuel Pellegrini’s side. Unwanted players have departed, Pablo Fornals looks an exciting addition in midfield and West Ham have reacted well to losing Marko Arnautovic, replacing the disruptive Austrian forward with Sébastien Haller and Albian Ajeti. They broke their transfer record to sign Haller from Eintracht Frankfurt and Ajeti, a 22-year-old Swiss international, scored 15 goals for FC Basel last season. The concern, however, is that Pellegrini has not focused on strengthening a suspect defence, either by recruiting better full-backs or signing cover in defensive midfield. JS

Nuno Espírito Santo likes to keep his squad tight so did not demand massive reinforcements despite Wolves’ European commitments. That risks leaving them vulnerable to a spate of injuries. On the plus side, they have retained the players who excelled last term, turning loans for Raúl Jiménez and Leander Dendonker into permanent deals. The few newcomers offer promise, especially the powerful striker Patrick Cutrone and the centre-back Jesús Vallejo, who joined after leading Spain to victory at the U-21 European Championship. PD