Timo Werner breaks Leipzig record to help them past Mainz 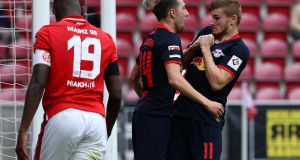 RB Leipzig’s Timo Werner scored a hat-trick as they demolished hosts Mainz 5-0 on Sunday to reclaim third place in the Bundesliga with an emphatic victory after three straight draws.

Germany international Werner, who has been heavily linked with a move to Liverpool this summer, opened his account in the 11th minute and Yussuf Poulsen nodded in the second goal in the 23rd.

Marcel Sabitzer killed off the game before the break, flicking in from close range as Mainz collapsed.

Werner scored again three minutes after the restart and the 24-year-old forward chipped the ball over keeper Florian Mueller in the 75th for his 24th goal of the season and 91st in all competitions for Leipzig to become their all-time top scorer.

“Timo Werner has developed a very good sense not to move only on the wings but to go over to the 10 position,” said Leipzig coach Julian Nagelsmann of his striker’s work in a more central attacking role.

“Coupled with his speed, that makes him a more versatile player and makes it harder for his opponents to control him.”

Leipzig, who crushed Mainz 8-0 earlier this season with Werner grabbing a hat-trick, moved back into third on 54 points, one point ahead of Bayer Leverkusen and two clear of Borussia Moenchengladbach in the battle for a Champions League spot.

Leipzig also set a club record with 68 goals scored this season, more than in any other entire campaign since their promotion to the Bundesliga in 2016.

Mainz put bodies in defence but were unable to match Leipzig’s speed down the wings and they failed to launch any sustained attacks of their own until late in the game.

Also on Sunday, Schalke 04 slumped to a shock 3-0 home loss to relegation-threatened Augsburg, their fourth defeat in five games dropping them to eighth place.

Augsburg’s Eduard Loewen curled in a sensational free kick from 23 metres in the sixth minute and Nigerian winger Noah Sarenren Bazee slotted home in the 76th before Sergio Cordova added the third in stoppage time.

Schalke, now without a win in nine league games, slipped down to eighth place on 37 points while Augsburg’s first victory after four straight losses lifted them to 12th on 30, seven above the relegation playoff spot.

Meanwhile, late headers by substitute Anthony Modeste and Jhon Cordoba allowed Cologne to salvage a 2-2 home draw against Fortuna Duessledorf after Mark Uth had missed a penalty for the hosts.

The result put Cologne 10th on 34 points from 27 games while Fortuna stayed 16th on 24 points, three adrift of the safety zone.

The home side had more possession in the first half but Fortuna always looked more likely to score and Kenan Karaman fired them ahead in the 41st minute with a deflected shot from inside the penalty area.

Uth twice hit the post in quick succession and was bundled over in the ensuing goalmouth scramble in the 57th minute, but Fortuna keeper Florian Kastenmeier saved his poor spot kick.

Cologne were punished soon after as Erik Thommy capped a sweeping move with a sweet first-time shot from 13 metres, threading the ball into the far corner beyond keeper Timo Horn.

With the match played behind closed doors in line with Covid-19 precautions, the front rows in the Rhein Energie stadium were decorated with Cologne fan merchandise and the team shirts finally seemed to inspire the hosts late in the game.

Modeste pulled one back in the 88th minute when he rose above his marker to head a cross by substitute Dominick Drexler from the right into the far corner, rekindling their hopes of coming away with something from a drab performance.

With time running out, Drexler floated in another superb cross from the right and Cordoba steered a downward header into the ground and up into the roof of the net in stoppage time.

Bayern Munich lead the standings with 61 points, four ahead of Borussia Dortmund who they face on Tuesday.

The Bundesliga became the first major sports league to resume last week, with no fans in attendance, after being suspended for more than two months due to the Covid-19 pandemic.

1 Monica Seles: The warrior queen who could have been the best ever
2 IRFU in line for €75m windfall as CVC acquire 14.5% Six Nations stake
3 Bryson DeChambeau motors home with 65 to win in Detroit
4 Coronavirus has turned Viktor Hovland into long drive champion
5 Eamon O’Shea: We spent quite a bit of time talking about older people rather than to them
Real news has value SUBSCRIBE
Crossword Get access to over 6,000 interactive crosswords