Michael Walker: Henry’s hand of faith and its part in French football’s Waterloo 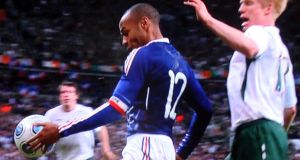 A videograb of Thierry Henry’s handball that led to William Gallas’s goal during the World Cup playoff, second leg against the Republic of Ireland at the Stade de France in November 2009. Photograph: Sky Sports

Viewed in isolation, it was a free-kick from Florent Malouda that floated over the Irish defence. The ball was deep in Shay Given’s penalty area. It was going out of play. The Irish were still leading on the night and the extra-time drama was ongoing. And that was that.

Then Thierry Henry stuck out his left hand and Irish football had another night in November.

In an instant Henry controlled the ball with hand and foot and William Gallas scored. Henry was running away in apparently carefree celebration, despite knowing what he had done, and France were off the 2010 World Cup in South Africa.

That was that, a moment in time, controversial of course but a night of finality. Except there is always a before and afterwards.

Soon Nicolas Sarkozy, the president of France would apologise for his countryman’s stray hand. In time €5 million would be funnelled into the FAI’s coffers and, from there, to who knows where?

In that sense ‘Henry’s handball’ did not stop with the final whistle, just as Diego Maradona’s handball against England in 1986 was not a beginning. It had roots in Maradona’s street culture and Argentina’s naval mis-adventures.

One of the many benefits of Matt Spiro’s forthcoming book on the past 25 years or so of French football Sacre Bleu – From Zidane to Mbappe is that Henry’s hand gesture is placed in a broader context, shown to be neither the start of something nor the end of it.

Henry was past his 32nd birthday that night in Paris. He was playing for Barcelona but no longer the central figure he had been for so long at Arsenal. The va-va-voom years were over. But, he was still Thierry Henry, a man of huge consequence in French football, someone who connected the country back to its glory days in 1998.

As such, what Henry said mattered. And as Spiro reminds us, France were so poor at Euro 2008 they finished bottom of the group with one goal and one point. The Netherlands beat them 4-1. Now, in qualification for 2010, they were not dominating even a mediocre group. Serbia were its leaders.

In the September before the fateful November, Romania went to Paris. In the training session the day before the game, Henry – not the manager Raymond Domenech – halted play. “Coach, we’ve got something we want to say,” Henry began. “I’m talking on behalf of the group here . . . we are bored during your training sessions . . . we have no style, no plan, no identity.”

It was brutal and it is indicative of Domenech’s neutered status that he put up with this, or had to. If only the French had a phrase for coup d’etat.

Henry would say this version of what he said was “distorted”, but something was said. France was a squad splintering.

Anyway, the next day it was France 1 Romania 1. Henry’s intervention had not galvanised the squad. It was one of the results that contributed to France finishing a point behind Serbia in Group 7 and which led to the playoff against Giovanni Trapattoni’s Irishmen.

When Nicolas Anelka scored in Dublin in the first leg, France seemed set for a reasonably comfortably progression. This was one reading of the situation. But within the France squad, clearly it was different. If progress was made, it was in spite of their manager, in spite of players with diverging agendas.

Therefore, seen from other than Irish eyes, Henry’s handball wasn’t just a sporting outrage, it was camouflage. Had the goal been disallowed and France had gone out that night, Domenech would have been finished. Henry’s international career would surely have ended too. Instead, the two limped on together apart to South Africa 2010 – where things got really bad.

For Saipan 2002, read Knysna 2010. Trying to explain the scale of these episodes to those outside the countries can be as perplexing. Suffice to say that in the foreword to Spiro’s book – penned by Arsene Wenger – there is the following: “You could say that Knysna was like our Waterloo.”

Knysna was the town where France were based. Unlike Saipan, the complaint was that the facilities were too good, the players were in a bubble of luxury.

In his head, Domenech had wanted to drop Henry from the squad. He travelled to Barcelona to convey this message and returned with Henry in the squad.

So previous football tensions remained within, while externally French society continued to change and the public’s distance from ’98 grew. Back then we had marvelled at our cod sociological analysis of ‘Generation Black, Blanc, Beur’ – black, white, Arab – at how the team of Desailly, Deschamps and Zidane came to be a symbol of unity in a country where Jean-Marie Le Pen shouted loudly about national identity.

By 2010, Black, Blanc, Beur was a symbol of disunity. The Paris suburbs, from where so many of the squad originated from immigrant backgrounds, were seen as un-French to many. There were bigger issues – terrorism, a global economic crisis.

And then there was Henry’s handball.

“Before the tournament, a poll carried out by Le Parisien newspaper revealed that 46 per cent of French people no longer even liked the team,” writes Spiro. “No sooner had they arrived in South Africa than the players were under attack from the secretary of state for sports, Rama Yade, who accused them of ‘showing a lack of decency at this difficult economic time’.”

Anelka was perceived as the personification of a swaggering narcissism. The accusation was that players were more interested in making millions in England or Spain than fighting for France. People nodded.

After a 0-0 draw in the opening game against Uruguay, Anelka was taken off at half-time in the second game against Mexico. It was 0-0 then too. Domenech could not believe Anelka’s lack of effort – or rather he could, because before the tournament, in another sign of player power, Anelka had said he wanted to drop deep rather than play the No 9 role assigned by Domenech.

Anelka’s reaction to his substitution was along the lines of “Stick it up your bollox” and some inside the dressingroom may have smirked. But when L’Equipe printed: ‘Va te faire enculer, sale ls du pute’ – ‘Go fuck yourself, dirty son of a whore’ – on its front page, France exploded.

“Go and see the players and yell at them,” Sarkozy instructed a minister.

Anelka was sent home and for about five minutes the players looked mortified. Then they went on strike, refusing to train before the last game against South Africa.

All the while, Henry, the senior player, practiced what Séamus Heaney called “innocent bystanding”. Henry’s credibility, already damaged by Paris, slipped further and while he went on as a substitute for Djibril Cisse against South Africa, France lost 2-1.

They flew home into a tempest followed by a parliamentary inquest. Henry’s international career was over. His handball had settled no-one.

- Sacre Bleu – From Zidane to Mbappe by Matt Spiro is out soon through Biteback Publishing.