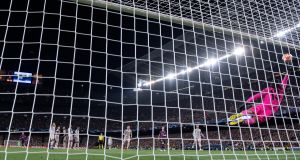 It was a relegation of sorts for Michael Owen, rather than being on BT’s punditry panel for the game he was stationed in the tunnel. Come half-time, Gary Lineker noted that just over his shoulder was the Barcelona chapel where some of the home players are known to drop in for a quick pre-match word with the Highest Power. God, that is, not Lionel Messi.

Michael was able to tell us that he’d seen Jordi Alba enter the chapel before the game, although, the heathen added, “I don’t know what he was doing in there”. The clue is in the word ‘chapel’, but Owen might actually have known this because he quickly added, “we all pray, as I say, that Liverpool can stay in this game”.

They were trailing, as it happened, to a sumptuous Luis Suarez finish that was created by a delectable Jordi Alba assist. You’d have guessed, then, that when he was in the chapel his prayer went along the lines of ‘please let me hit one cross that will border on art’. Jordi’s prayers well and truly answered, then.

Spookily enough, when Michael had been attempting to chat pitchside with Des Kelly before the game his observations had been somewhat drowned out by the stadium DJ blasting AC/DC’s Highway to Hell through the speakers, him possibly sensing that Michael was agnostic at best on the powers of Barca’s chapel.

Upstairs in the studio, Barcelona and Liverpool old boy Luis Garcia, looking for all the world like he’d just stepped off a catwalk to join Gary and Rio Ferdinand in the BT studio, was trying to find the words to describe Messi, a task, as we know, that is largely unachievable.

In the end the best he could offer was to recall the words of a former team-mate of his who said that Messi is “the only player in the world who, when he wakes up in the morning, knows if he is going to win or lose – if he decides he’s going to win the game, he’s going to win”.

Much as Gary loves Lionel, he found this unconvincing, partly because it involved accepting that there will be days when Messi wakes up and decides to lose rather than win. So he thanked Luis for his efforts and opted to focus on stats instead.

“Just the 598 goals in 682 appearances for Barca . . . 46 goals this season, the 10th successive season in which he has scored more than 40 . . . ,” and on it went. “Laughable,” said Rio, although he was less amused by video reminders of Messi taking on Phil Jones when Barca played Manchester United in the last round, Phil left in so many knots they’re probably still trying to untie the poor lad. “He’s got a family, man, you can’t do that to people.”

Meanwhile, the evolution of how the name of the night’s host stadium has been pronounced by English-speakers through the years continues apace: we’ve gone from ‘Noo Camp’, ‘Camp Noo’ to ‘Camp Now’. All very confusing, but Gary reminded us of one thing that is very clear: the Champions League “is the one Barcelona want, what they really really want”, so we’d gone from AC/DC to the Spice Girls in one fell swoop. And you don’t often get to type that sentence.

Off we went and the gods ordained that Alba and Suarez combine to make it 1-0. “There was nothing,” Steven McManaman argued, “that Virgil van Dijk could have done about it”, a suggestion with which Rio vehemently disagreed come the break. “He’s at fault, Suarez is right in front of him, that’s your man, number nine on the back of his shirt, static, that’s criminal.” Is it too late to take Virgil’s player of the year award back from him?

Second half. McManaman was bemoaning the fact that “the fans here are so protective of Messi – you’re not allowed to foul him, kick him” (for Macca’s next birthday, someone should buy him The Rules of Association Football). In the end it was the wee man who kicked Liverpool when they were just the one goal down. Forever more we will ask of his second: how was that free-kick even possible?

So, clearly Messi woke up on Wednesday morning and decided that he was going to win this game, so apologies for doubting Garcia’s mate, he was spot on. Intervention of the divine kind, once more, Barca on the Highway to, well, Heaven.

1 Tipping Point: Eddie Jones’s rhetoric is out of place in a febrile political climate
2 Maguire and Martial head Manchester United past Chelsea
3 Rory McIlroy heads for Mexico with ‘WGC slam’ in sight
4 Ireland backrow of O’Mahony, Van der Flier and Stander to be retained against England
5 Jürgen Klopp wants Liverpool to show they are contenders
Real news has value SUBSCRIBE