Stunning free-kick was Argentinian’s 600th goal for the club 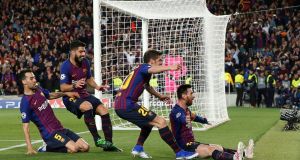 Sometimes it feels like there are no more superlatives left. Seriously, what else can be said about this little guy with the No 10 shirt and magic in his feet other than to ask, perhaps, whether these are the occasions when Lionel Messi buries any lingering debate about whether Pelé or Diego Maradona, or any of the others, have ever played this sport any better? Not a chance they did.

For Liverpool, it was a harsh reminder about the realities of the Champions League at its highest level. They could be forgiven for thinking they might have come away with a significantly better result. They certainly had their chances, at 1-0, to put themselves in a better position for the return leg. At this stage, however, the teams that generally succeed are the ones with the clinical edge. Or the ones, in Barça’s case, who have a genius in their ranks.

What other word can be applied to describe Messi when he is capable of decorating football’s biggest occasions with the gorgeous free-kick he scored here for Barça’s third goal? Messi had already scored another one, six minutes earlier, to go with the first-half goal from Luis Suárez and, realistically, it is difficult to see any way back for Liverpool at Anfield next Tuesday.

More than anything, Liverpool will have to cling to the hope that Messi can somehow be restrained. At times Barça’s plan seemed to revolve around nothing more than getting the ball to him, sometimes even when he was not the best option for the pass, and hoping he would be able to weave past however many defenders stood in his route. And Messi, being Messi, he always looked up for the challenge.

At the same time, Liverpool will have to recall the occasions when they showed they were capable of inflicting damage of their own. The most mesmerising run of the opening half featured Mohamed Salah slipping the ball through the legs of Arturo Vidal and making it another 30 yards, post-nutmeg, before he was stopped.

Roberto Firmino’s absence meant Liverpool were deprived of one of their key performers but Georginio Wijnaldum played with tremendous energy in that high-pressing role. Salah looked determined to show he can illuminate these elite occasions and, if he plays with the same purpose in the return leg, they will believe goals are possible. Before then, however, Sadio Mané might wake in a cold sweat when he thinks about the chance he aimed over the bar, having run clean through on goal, in the first half.

The problem for Liverpool was that Barça always had Plan A: find Messi. At one point the five-time Ballon d’Or winner showed the ball to Andy Robertson then dinked the ball over his opponent with such audacious brilliance, not even breaking stride, that a roar of approval swept round this cavernous old stadium.

Not long afterwards, he had deceived Fabinho in such a way the mind went back to James Milner trying to stop Messi on a previous assignment here, four years ago, with Manchester City. On that occasion Messi’s nutmeg left Milner on his backside and when the camera panned to Pep Guardiola, watching the game in the stands as Bayern Munich’s manager, he had his head in his hands, roaring with laughter at the impudence of his former player.

No wonder Milner made sure, with a shoulder-barge to send Messi into touch, that the Argentinian knew of his presence in this re-match.

Messi was so predominantly involved it felt strange, to say the least, that he did not play a key part in Suárez’s goal. Vidal had switched the play with a long, diagonal pass from right to left. Philippe Coutinho turned the ball into the path of Jordi Alba and the cross was beautifully weighted to give Suárez the chance to steal in for the decisive touch.

Suárez still had to be alert to the danger but he showed wonderful anticipation to run from an onside position in between the two Liverpool centre halves. Virgil van Dijk had not been quick enough to push out and Suárez slid in, jutting out his right leg, to poke the cross past Allison in Liverpool’s goal.

Did he celebrate? What do you think? We should know enough about Suárez by now to realise he is not one for football chivalry. He just is not wired that way, particularly when his team are trying to win their third treble in a decade, and it was the same again in the 75th minute when Barça doubled their lead.

It was Messi’s run that sparked the panic. Fabinho’s challenge inadvertently turned the ball into Sergi Roberto’s path and when the ball broke to Suárez his volley thudded off the crossbar. Messi was following up to run in the rebound.

His free-kick came next, 25 yards out, arching into the top corner. It was magnificent and when Salah had the chance to respond his shot came back off the post. - Guardian