TV View: Bayern and Real prove there’s no show like a Mo show

Fare from Munich was ‘chalk and cheese’ compared to Anfield 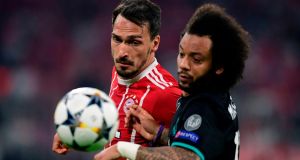 It’s not often that you’d worry that a meeting of Bayern Munich and Real Madrid might have a post-Lord-Mayor’s-show feel about it, them being footballing aristocrats and all, but it had a decidedly hard act to follow from the night before.

Still, the show had to go on, the prize of runners-up to Mo Salah in Kiev on May 26th still up for grabs.

Before focusing on matters in Munich, the panel reflected on events in Anfield, and by the end of their review the watching Liverpool faithful must have wondered if that 5-2 was actually but a dream.

“It felt like a loss,” said Didi Hamman somewhat mournfully, while Darragh Maloney asked Eamo Dunphy if Liverpool had “let the door a bit ajar” by conceding those two goals?

“They’ve left the door a lot ajar,” he replied, “I think they’ve given Roma a reason to believe they can go through.”

And then he reminded us that not even Lionel Messi scored against them in the quarter-finals in Rome, “and for all the brilliance Mo Salah has shown this year, he’s no Lionel Messi”. Was he done? No. “I must say as a Liverpool fan I felt very deflated afterwards.”

By now the same Liverpool faithful might have been checking the refund policies of the airlines with which they’d booked their trips to Ukraine.

On a more upbeat note, Eamo saluted the Liverpool gaffer. “I was a Klopp fan from day one,” he declared, not realising the interwebs is, cough, forever. Damien Duff’s scrunched-up face suggested he remembered December 2017 too (“Klopp is a total eejit. I mean, he bought Oxlade-Chamberlain. Who in their right mind would spend £35m on Alex Oxlade-Chamberlain? They are doomed, he will be fired out of there.”)

But look, some of us thought Mo Salah would be the new Sean Dundee, so there’ll be no stone-chucking in this glasshouse.

Any way, there was a brief discussion at the giant iPad about diving, ethnicity and the like, Eamo asking Didi in what ethnic category would he would place Polish man Robert Lewandowski. This is not often a discussion you’d hear between, say, Robbie Savage and, well, anyone.

But the only thing that Eamo and Didi really needed to tell their viewers about Robert is that he eats his dessert before his main course. This is true. And to think it’s goalkeepers who get branded as nutjobs.

Disappointingly, literally nobody addressed the big question of the night: How can Jupp Heynckes possibly be only 72 when he’s been a manager for almost forever?

Eamo neglected to offer an answer to that conundrum, busying himself instead with being ageist about Arjen Robben and Franck Ribery.

Over to George Hamilton who predicted a “goal fest”, which had us inevitably fearing the drabbest of 0-0s. And then he told us the referee has a hairdressing salon and a supermarket back in the Netherlands, his knowledge of Champions League officials’ extracurricular activities still peerless.

George also, incidentally, knows more about Mats Hummels’s Labrador Coco than possibly Mats himself, the Bayern defender apparently bringing Coco to training this week because his wife had gone on holidays to Miami. She’s a big Champions League fan, evidently.

At one point Mats attempted to spray a pass to the right wing and it nigh on ended up in Dusseldorf, George reckoning it was because he’d spent the week overhitting balls for Coco. Jupp will have the poor fella placed in a pound. Coco, not Mats.

But after 28 minutes Jupp might have been tempted to put Coco on the field, just to add a bit of energy and pace to Bayern’s less than dynamic efforts. But then Joshua Kimmich put them a goal up when he inserted the ball past Keylor Navas’s near post, at which point a €396 million bid for David de Gea, plus Bale, came through on the Old Trafford fax machine.

There concluded Bayern’s joy, Marcelo equalising, Marco Asensio getting the winner. And Ronaldo had a goal disallowed too, his Champions League goal-scoring drought now one game.

But it wasn’t scintillating, “chalk and cheese” said Damo when comparing our Tuesday and Wednesday nights.

Although if we’d a Euro for every Luka Modric misplaced pass, we’d be Euro-less. So that was worth the 90 minutes plus added time. Still, though, Coco might be required in the return leg. Bayern will need all the bite they can muster.