Jose Mourinho says there's no issue between him and Paul Pogba

Shaw can expect new contract after getting back into first-team picture, says manager 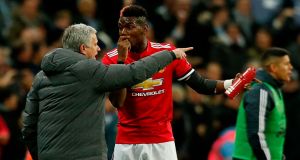 Mourinho insisted there was no problem between him and Pogba after he dropped the player for last Saturday’s 2-0 win over Huddersfield Town, having substituted him in the 2-0 defeat at Tottenham Hotspur three days earlier. That was the first time the 24-year-old has been taken off since United bought him for £89 million in summer 2016.

Asked how Pogba reacted to being excluded, Mourinho said: “Paul had a very professional behaviour. The week was not different to what Paul is every week. He works well, he’s a good professional, he likes to train. I’ve never had a single problem with him.

“When people ask his best position: he’s a midfield player. It depends on the tactical system, but he will always be a midfielder. Then with so many opinions, and we are in a world of opinions, people can get confused. There is no confusion between me and Paul. It’s difficult to play a midfielder with more potential than Paul.”

Pogba has played in a Champions League final for Juventus and the Euro 2016 final for France. It was put to Mourinho that this pedigree suggested the player should already be the finished article.

Mourinho appeared to question Wayne Rooney’s assessment of where Pogba can best operate. United’s highest scorer said last Monday that the Frenchman should not have defensive responsibilities but play as a “box-to-box” midfielder”.

Mourinho said: “In relation to his best position, I had a few laughs over the past week because I heard, I watched, had a chance to read a few things, and I’m not English but I understand English enough to understand what I want to say with ‘box to box’.

“But with some comments from important people in football I got a little bit confused because for me ‘box-to-box’ means that you have to defend well in this box, you must have the physical , the desire, the intensity, the stamina condition to go to the other box and be good scoring, creating, heading, so on.

Rooney, speaking on Sky Sports, had said: “For me Paul Pogba is a classic box-to-box player. He can do a bit of everything really well. If he has that freedom where he doesn’t have to think too much about his defensive role he can cause mayhem.”

Mourinho also said Luke Shaw could expect a new contract after fighting his way back into the first-team picture. The left-back’s deal expires in the summer.

“Luke is not about changing my mind – it’s just the evolution or no evolution of his potential,” said the manager. “I know Shaw since he arrived in the Premier League with Southampton and know his potential and quality. Could he come in my direction [was the question] – the way I like my players to be not just on the pitch but during the training week, and he made a big effort.

“He’s been free of minor injuries for a few months which sometimes stops the evolution, and I’m really happy. The natural consequence of it is that he will have his contract and he will be a United player for years.” – Guardian