Time for a Manchester United reboot, but a proper one this time 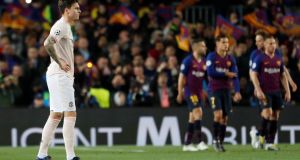 On the stroke of half-time Lionel Messi did something awful, but also quite funny, to Phil Jones. Messi had spent the previous 45 minutes picking up the ball in half-spaces and running in a series of vengeful repetitions at Jones and Chris Smalling.

This time Messi took the ball just past the centre circle. He saw the space ahead of him. He also saw Jones ahead of him. As the United man veered back into his path there was a nutmeg so gentle it was almost loving.

The Camp Nou let out a roar. Jones surged back gamely but could only watch as Messi jinked past the other way, teasing him the way you might tease a fond, lovable old family dog with a paper cone on its head and one good eye.

Messi shot at goal, looking for a first half hat-trick, but the ball hit David de Gea in the chest and squirted away. Moments later the half-time whistle blew. United were 2-0 down and already looking like a team that had, for now, reached the end of something.

It was that kind of night. At a noisy, breezy Camp Nou, United’s Champions League campaign, and indeed the opening act of the Ole years, found it had no distance left to run.

This is probably for the best. The goodwill, the human qualities of United under Solskjær – the simple fact of not being José, king of pain – have given United’s fans warm memories to take from this season.

But even in their winning run United seemed unnaturally buoyant, like some fun, colourful flying machine made from nailed-together planks and bits of old bicycle, out there surfing the currents above the ravine.

There is no reason why Solskjær cannot hope to generate that energy again. But if any one moment captures the work that is required, the jerry-built nature of the structure beneath it is perhaps the image here of Smalling and Jones caught in the pure white glare of Messi’s brilliance.

Smalling and Jones: as a defensive partnership there have been good times along the way. But it has become a kind of gallows humour classic too, a baleful double-hander of the post-Fergie years.

Jones in particular has been oddly persistent, an heirloom handed down from manager to manager like a chipped mahogany sideboard nobody can ever quite get rid of. He can look imposing, assured, powerful, out of control, baffled, euphoric, gripped with panic – often all at the same time.

Here Jones took to the field decked out optimistically in a white head bandage, preserve of the heroic centre-half. Alongside him United fielded a team of mix-and-match defensive parts. Four of the back five were brought to the club by Alex Ferguson, who has, for all the fond nods and sighs, been gone quite a long time now.

The first goal came after 16 minutes. Young gave the ball away to Messi in the inside right position – arguably the single worst thing any footballer can do. From there Messi did something equally terrible to Fred, jinking him out of his path, then curled an elegant little left-foot shot into the corner.

Four minutes later it was two. This time Jones faced Messi on the edge of the area and forced him on to his weaker foot. Sadly United had the Spanish model De Gea in goal. He crumpled horribly over the ball and watched it trickle into the goal.

United were done, paddling for the end with 70 minutes still to play. The subs came on: a bafflingly ineffective Romelu Lukaku and finally the black hole that is Alexis Sánchez, recipient of £35m in wages to date and still a strange presence at the edge of things, sucking energy and good vibes out of this groaning, leaking work in progress.

What is this team supposed to be anyway? What does Fred do? Are United trying to dredge through a team of hungry homegrown talents or have they become a half-baked superstar vehicle, the China of the Premier League, a convalescent home for basking stars manacled by their own wages?

Watching all this Ed Woodward must surely feel some sense of embarrassment at the fruits of his labours. Look on my works ye mighty and … well, scratch your head and look confused.

The structure around him has failed. One man distracted by other duties, plus a series of jobbing, big-ego managers does not make for a coherent football club.

Someone needs to take a scalpel to all this. Without the will and the means to remake this team and to put a cap on the bleeding away of the last few years, a Champions League quarter-final could end up being the high point of the Ole years.

Time for a reboot, but a proper one this time, a chucking out of the chintz. No doubt Solskjaer can see this, as can United’s fans. The question is whether anyone above him in that grand leadership vacuum cares to do anything about it.

1 Tour de France: Every yellow jersey winner must feel guilty by some association
2 Kevin Babington: Learning to live again after life changed forever on Long Island
3 Matt Williams: The sky is not falling in on Irish rugby - but Ireland do need a new plan
4 Clifford brothers to the fore as East Kerry retain title
5 Last kick of the match sends Cavan final to a replay
Real news has value SUBSCRIBE