Premier League champions show mettle and get a bit of luck 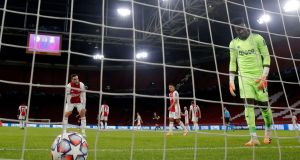 Andre Onana of Ajax and teammates look dejected after Nicolas Tagliafico scores an own goal during their Champions League clash with Liverpool. Photo: Dean Mouhtaropoulos/Getty Images

To launch a Champions League campaign with an away win would satisfy Jürgen Klopp in normal circumstances. To do so after a hugely turbulent and damaging week, with the added bonuses of a clean sheet and change in fortune, was a reminder of the European pedigree that the Liverpool manager has at his disposal even without the injured Virgil van Dijk.

Luck played a significant part in Liverpool’s victory at Ajax with the home full-back Nicolas Tagliafico settling the outcome with an inexplicable own goal. Klopp will feel that is the least his Premier League champions deserve following the injuries that clouded the build-up and the determination that dragged his team over the line in Amsterdam. With Joel Matip left on Merseyside as a precaution, having also picked up a knock at Goodison, Klopp had little option but to shift Fabinho into central defence alongside Joe Gomez.

The defensive midfielder may become accustomed to that role in the coming months and there was an immediate knock-on effect in Amsterdam. Jordan Henderson was not risked for a second start in five days having only recently returned from injury and, with Thiago Alcântara also out with a knee problem, there was a full Champions League debut for Curtis Jones and a third start of the season for James Milner. It was the veteran’s 108th appearance in European competition. Jones was one when Milner made his Premier League debut.

Fabinho made a series of timely interceptions in the opening exchanges. One led to Mohammed Kudus injuring his right knee in an awkward landing, and the Ghanaian forward had to be replaced by Quincy Promes. The Brazilian’s timing and awareness of danger were among the few highlights of Liverpool’s defending, however. Uncertainty was perhaps to be expected in the visitors’ backline as they started without Virgil van Dijk for the first time but several unforced errors intensified Klopp’s frustration on the sideline.

A lack of communication between Gomez and Adrian saw them collide with each other and gift Ajax a throw-in after only two minutes. Liverpool also took the conservative option of passing back to their goalkeeper too often early on. The hosts sensed an opportunity, and Adrian was fortunate to escape when one delayed clearance struck the in-rushing Dusan Tadic but rebounded to safety. The Spanish goalkeeper produced the first save of the game when Tadic found Lisandro Martínez unmarked at the back post after a well-worked corner. The defender’s header made for a routine stop.

Ajax met little resistance when passing their way through Liverpool’s midfield. Ryan Gravanberch shot wide from the edge of the area and Promes should have opened the scoring after former Everton midfielder Davy Klaassen and David Neres combined for a clear opening inside the area. Promes, unmarked and only 10 yards from goal, shot straight at Adrian. Liverpool capitalised on the let-off in the most fortuitous fashion.

For all the disruption in defence and midfield, Liverpool were still able to call on the formidable talents of their established front three. A fine insurance policy. It required a superb challenge from Danny Blind to prevent Roberto Firmino latching onto Mohamed Salah’s back-heel into the penalty area. Sadio Mané was a constant threat from the left but engineered the breakthrough without knowing too much about it. The Senegal international spun away from his marker expertly when collecting Milner’s throw-in. He then completely scuffed a shot across goal only for the Ajax left back, Nicolás Tagliafico, to steer the ball into his own net under zero pressure.

Liverpool, as dangerous in attack as they were open defensively, almost doubled their lead when Andy Robertson slalomed through the Ajax half and found Salah in space inside the area. A vital block from Noussair Mazraoui prevented Salah’s shot from finding the far corner.

Tadic thought he had equalised when he latched on to a long ball behind the Liverpool defence and lobbed the advancing Adrian. Fabinho rescued his team with a brilliant overhead clearance on the goal line. Liverpool immediately swept down the other end and Mane almost conjured a second own goal out of Ajax, only this time Perr Schuurs’ desperate attempt to intercept the striker’s cross sailed inches wide of the near post.

Klaassen was unfortunate not to level matters early in the second half when his first-time shot from Tadic’s lay-off struck the inside of a post. Klopp withdrew his entire forward line on the hour, clearly with an eye on Saturday’s Premier League visit of Sheffield United, as Diogo Jota, Xherdan Shaqiri and Takumi Minamino were tasked with carrying the threat to the reigning Dutch champions.

Georginio Wijnaldum, Jota and the incisive Robertson all went close to extending Liverpool’s advantage in a second half that brought a more compact and improved defensive display from Klopp’s side. – Guardian