Elsewhere there were wins for Olympiacos and Atalanta 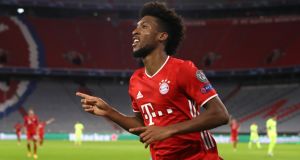 Winger Kingsley Coman scored twice and set up another goal as holders Bayern Munich crushed Atletico Madrid 4-0 in the Champions League Group A opener on Wednesday to stretch their winning run in the competition to 12 games.

The France international put the hosts ahead with a fine effort in the 28th minute and then set up Leon Goretzka to fire in their second in the 41st.

Fellow France international Corentin Tolisso killed off any Spanish hopes of a comeback with a sensational shot in the 66th minute before Coman twice shook off defender Felipe to bag his second goal of the evening six minutes later.

Bayern, who had won all 11 of their games en route to the Champions League title last season, are top on three points in group, with Lokomotiv Moscow and Salzburg on one following their 2-2 draw.

Salzburg let Lokomotiv Moscow off the hook when they were held to an entertaining 2-2 draw at home by the Russian side.

The Austrian champions were leading 2-1 and completely in control only to be pegged back by an equaliser from substitute Vitali Lisakovich, who scored six minutes into his Champions League debut in the Group A game.

Portugal forward Eder, scorer of the winning goal in the Euro 2016 final against France, gave Lokomotiv the lead in the 19th minute with a header into the corner after Rifat Zhemaletdinov nodded on a corner at the near post.

The hosts turned the game around with two goals either side of halftime. Dominik Szoboszlai curled in the equaliser in the 45th minute and veteran Zlatko Junuzovic scored with a deflected shot after Patson Dako laid the ball back to him seven minutes after the restart.

Sekou Koita hit the post for Salzburg but they were caught after losing possession on the edge of their own area and Lisakovich levelled with a 75th minute header which bounced between goalkeeper Cican Stankovic and his near post.

Inter Milan forward Romelu Lukaku scored twice, including a 90th-minute equaliser, as the Serie A side snatched a 2-2 draw at home to Borussia Moenchengladbach in the Champions League.

The Belgian put Inter in front with an opportunist goal in the 49th minute but the Bundesliga side levelled in the 63rd with their first shot on target, a penalty converted by Ramy Bensebaini.

Gladbach’s second shot on target also produced a goal as Jonas Hofmann broke clear of the Inter defence and scored with a shot through Samir Handanovic’s legs in the 84th minute.

Lukaku, however, had the final say in the Group B game with another opportunist effort when he managed to scramble the ball home at the far post with his knee after a corner was headed on by Alessandro Bastoni.

Hassan, who came on for Giorgos Masouras in the 84th minute, headed home an inch-perfect cross by former Marseille forward Mathieu Valbuena after a dominant Olympiakos had missed a string of chances.

In a dour first half, Yann M’Vila volleyed over the bar and Youssef El-Arabi had a close-range shot blocked for the home side while Florian Thauvin fired just wide at the other end.

Olympiakos had a goal scrapped for offside after a VAR check in the 52nd minute, with Masouras sweeping in a rebound after Marseille keeper Steve Mandanda parried Valbuena’s stinging low shot.

Lazar Randjelovic hit the post for Olympiakos in the 69th minute before the outstanding Mandanda palmed away a Valbuena volley from seven metres.

When the game seemed to be heading for a goalless stalemate, Hassan stepped up and beat Mandanda with an unstoppable downward header into the bottom left corner to give the Greek side a well-deserved win.

Towering Colombian striker Duvan Zapata scored one goal and set up two more as Atalanta cruised to a 4-0 victory over Midtjylland in their Champions League Group D clash in driving rain at the MCH Arena in Herning.

It was a tough debut for the Danish side in the Champions League group stages as they created little up front and were under constant threat in defence, with Papu Gomez, Luis Muriel and debutant Aleksey Miranchuk also on target for the Italians.

Atalanta, who had a surprise run to the quarter-finals last season, top the pool after the opening round of fixtures. Midtjylland visit Liverpool on Tuesday, while Atalanta host Ajax.

The Italians came into the game having been thumped 4-1 in Serie A at Napoli on Saturday and looked determined to erase that memory from the start as they took the game to their outgunned hosts.

Zapata broke free on the right side of the box early on but his shot from a tight angle rattled the post. He then forced an excellent save from home goalkeeper Jesper Hansen, whose fingertips denied the forward the opening goal.

The writing was on the wall though and two minutes later the striker put his side in front when a cross was cleverly headed into his path by Cristian Romero and Zapata rifled the ball past a helpless Hansen.

Atalanta doubled their advantage with a superb strike from Gomez, who collected a pass from Zapata 30 metres from goal and unleashed an unstoppable shot into the roof of the net.

It was 3-0 before halftime as the lively Zapata’s shot from the edge of the box was not held by Hansen in the wet and Muriel reacted quickest to turn home the loose ball.

Atalanta continued to threaten in the second half, with Miranchuk adding a superb fourth goal on his debut when he curled the ball into the corner of the net.