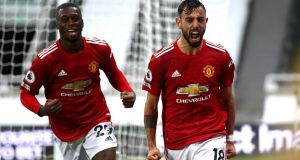 To fully appreciate the highs, it is necessary to first plumb the depths and Manchester United appeared determined to test the theory on Saturday in the must-win Premier League game at Newcastle. On the back of three shambolic performances in the competition, the most recent being the 6-1 capitulation at home against Tottenham, the last thing they needed to do was give their opponents a head start.

Still, they did so and, when David de Gea unfroze himself and Luke Shaw contemplated the reality of his second-minute own goal, United’s situation was heavy on bleakness. At that point the storm was coming for Ole Gunnar Solskjær – the questioning of his selection decisions, which had featured a few eyebrow-raisers; the bookmakers slashing his odds in the sack race; Mauricio Pochettino trending on Twitter.

Gareth Southgate had said during the international break that the pandemic had heightened everybody’s emotions to the point where tolerance had dramatically reduced. The England manager was talking about society in general, and not just football fans, but it would be interesting to see whether Solskjær agrees because, at the moment, he deals only in extremes. Maybe it is simply the life of a United manager.

And yet, happily for Solskjær, he can now prepare for the Champions League tie at Paris Saint-Germain on Tuesday – a rerun of his finest hour in charge of the club – on a genuine upturn, having seen his players clamber off the canvas at St James’ Park. What pleased Solskjær the most about the 4-1 comeback win was the way that his team stayed calm amid the crisis, trusting in the gameplan and rolling with the additional low blows of Bruno Fernandes having an equaliser ruled out by VAR and missing a penalty at 1-1. United asserted themselves, their passing and movement was excellent and the statistics would show they attempted 28 shots on goal – the most by any team in the league this season.

It was the timeliest of reminders that United’s good football after the restart last season – which served to haul them back into the Champions League – was not a thing of the past. Solskjær can get them to play this kind of stuff going forward and it felt as though United’s season had begun at last.

The temptation was to deride a Newcastle team that lacked drive, to place some sort of asterisk against the result, to note that tougher tests lie ahead – first PSG and then Chelsea, RB Leipzig and Arsenal. But Newcastle did not play because United did not let them and they did so without the suspended Anthony Martial, the injured Mason Greenwood and with Paul Pogba fit enough only to be used as a substitute. Solskjær could feel that in the performances of Juan Mata, Daniel James, Scott McTominay and Fred that he might have a little strength in depth after all.

What PSG’s analysis would have shown is United are no longer off the pace in physical terms. In the aftermath of the home defeat against Crystal Palace on the opening weekend, Solskjær said “we need four or five games to get up to the standard we know we’re capable of”. The lack of a proper pre-season was always likely to hurt United and, in the second league game at Brighton, for example, the players were a yard too slow in many positions, even if they somehow won. The less said about the Spurs game the better.

Newcastle, though, was game four and, significantly, it was another two weeks along from game three. Without fitness, there can be no performance. United now have the basis for the latter.

Solskjær continues to be assailed by negative perceptions. When led his team to the improbable 3-1 win at PSG in March 2019, squeezing into the Champions League quarter-finals on the back of Marcus Rashford’s controversial penalty, it not only got him the United job on a permanent basis but provided the platform for the club to go on and win trophies.

That has not happened, with quarter and semi-final disappointment becoming the norm while the gap to the top of the league has yawned wide. On the back of a frustrating summer transfer window, Solskjær’s ability to make the most of the players already at his disposal will come in for unforgiving scrutiny. Can he develop a team to take apart opponents that sit deep and prefer to counterattack?

With their front-foot football, PSG present a different challenge, a menacing one, especially as Solskjær has problems in central defence where Harry Maguire and Eric Bailly have not travelled because of minor injuries.

Solskjær can see rays of light. He stood by Maguire at Newcastle and watched him repay his faith with a commanding display after a few erratic ones – the captain should be available for Saturday’s home match against Chelsea – while Aaron Wan-Bissaka also took strides back in the right direction. Fernandes, meanwhile, was outstanding; a symbol of the quality and mentality that Solskjær seeks. It will be fascinating to watch him against high-class opposition at Parc des Princes.

As ever, Pogba has drawn plenty of pre-match attention, partly because he is returning to France and partly, because, well, he is Pogba. Solskjær faces other questions, one of them about how he can accommodate Donny van de Beek. The new signing again looked tidy as a substitute at Newcastle – a game he had hoped to start given the likelihood of changes after Spurs – but he is expected to remain on the bench in Paris.

Solskjær has bought much-needed breathing room, the chance to generate a little momentum. Can he show that the early season horrors are truly behind him? - Guardian