Solskjær a lucky general? Sometimes luck is another word for managing the details 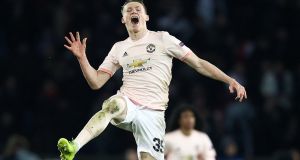 At the final whistle inside the Parc des Princes, Manchester United’s players started running across in a ragged, joyful cavalry charge towards the narrow band of their supporters at the far end.

Shirts were pulled off and hurled in the air. Scott McTominay did a European-record triple jump through the centre circle. Halfway there Chris Smalling looked down, noticed he still had the ball in his hands and hoofed it so high into the air it is probably still up there in the Paris skies, surfing on the weird voodoo of that moment.

It has been an in-and-out few years for Smalling, dropped intermittently by four different United mangers and occasionally harangued for his mistakes and clumsy control. In Paris he made one tackle during 95 minutes of sustained defensive football, the mark of an unusually clean, composed performance. Nobody knows what the future holds for this group of players, or indeed for Smalling, a survivor of the post-Fergie void. But whatever happens from here, he will always have Paris.

Can we just mention José Mourinho once to get it out of the way? Can we call this a final act of exorcism? It goes without saying it was another terrible night for the previous manager’s uppity and haunted legacy.

Although not completely. For a start, take a bow McTominay, José’s boy, who made five tackles, had a 96 per cent pass accuracy, followed Marco Verratti around like a security service chaperone, and at the very last could be seen wrestling Paris Saint-Germain players away from Marcus Rashford as he prepared to take the decisive penalty kick. He might not be Juan Sebastián Verón but McTominay will always have Paris too, a night when Ole Gunnar Solskjær drew from him exactly what Mourinho had seen.

Otherwise this was further evidence of two things. Firstly, of the poor fit between the club and United’s last permanent manager. In Paris the team Mourinho never wanted – patched together, un-starry, containing Fred – beat the sort of team he made such a funk about not having.

Mourinho sulked about needing to buy players. Solskjær rustled up a team of expensive bit-parts to beat the biggest spenders in European football, funded by those biddable friends in Qatar. Again, another silver lining on a bad night for José. There may well be a vacancy coming up in Paris before long.

Talking of which, we have now reached the stage where not to offer Solskjær the full-time United job would be an act of sporting self-harm. Everyone loves Ole. And with good reason, too. He is very lovable. Not to mention disarmingly sharp in his selections and tactical tweaks.

The case in favour was sealed by that rush of soppy but significant positivity. But it is still worth making. For a start, it is possible to be a lucky general and also a good one. Solskjær has been both. In Paris, PSG made 691 passes to United’s 224. By every worthwhile background metric PSG dominated both legs of the tie. They had a goal chalked off. They hit a post. A favourable VAR and the silliness of the away goals rule made the difference.

Chuck in Neymar and Edinson Cavani and the fine margins probably go the other way. Select a proper goalkeeper in place of Gianluigi Buffon, who has reached the piece-of-meat-with-eyes stage, and the story probably changes again. But then, what kind of absurdly theatrical star machine buys a 41-year-old celebrity goalkeeper in the first place?

This is the place where luck and judgment intersect. Solskjær did not make his super-talented opponents into a team with a team-shaped hole at its core, with an absence of basic heart and vim that seems to spring up along with the first bluebells every spring. But he did produce the qualities to exploit it.

For all its complex science and hard maths, football remains a defiantly emotional business. All through the build-up you felt United’s supporters, players and manager had a shared feeling this might just go their way.

There was another striking moment just after United had scored the decisive goal in Paris, just as PSG’s fans should by any measure have been sick, gone, broken.

Cavani came on, the PA man shouted “Edinson” and half the crowd were still happy and unbothered enough to shout back “Cavani” in a cheerful voice. Your season has just been assassinated in the cruellest fashion. Why are you even here exactly?

At the end of which Solskjær’s United have won 14 of 17 matches played. It is a record that suggests something more than just smiles and backslaps. There has been constant fine-point tinkering. In Paris it was the presence of two genuine strikers that worked best, although the four-man defence and midfield was opened up quite easily at times.

Solskjær left Romelu Lukaku out there for the final 20 minutes, even when his legs had almost gone. But he also brought on Mason Greenwood with a brief to run in behind PSG’s defence, as Lukaku had in the first half. Instantly that high defensive line dropped 10 yards, a move that led indirectly to Diogo Dalot being close enough to goal to try the shot that led directly to the VAR-assisted penalty that sealed the tie.

Sometimes luck is often just another word for managing the small details.

Best of all, Solskjær’s relatively short time in charge has asked the same question repeatedly: what is Manchester United for?

Is it simply to win pots? Is it to house star players? Does this team exist to choke opponents to death? This is not backward-looking schmaltz about free-wheeling football and red-shirted romance. It is a very modern point.

Clubs such as United are too big to fail now. They will exist and prosper at this level regardless of whether they win the FA Cup or the Premier League. What is required is something more nuanced, to project an aspirational excitement, to primp the brand, while at the same time tending to the club’s deep soul, the qualities expected by those who feel that this is their club, and who will always sustain it.

Solskjær has been good for the team. But he has also been good for the mental heath of this voracious modern super-club. United should, and surely will, give him the job. He has, by some vital measures, already succeeded.