Arsenal get Rennes over after Papastathopoulous sending off 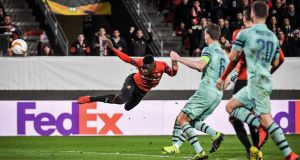 This was not just a defeat, it was a disintegration by Arsenal. They got off to an ideal start thanks to Alex Iwobi’s goal inside four minutes but by half-time they were a shambles, with Sokratis Papastathopoulous sent off for a plethora of bookable offences and Rennes equalising through a phenomenal strike by Benjamin Bourigeaud.

Nacho Monreal inadvertently turned a cross into his own goal in the second half and Ismail Sarr made certain the scoreline reflected Rennes’ superiority by heading into the net in the 88th minute.

Arsenal will have to perform far better than this to mount a comeback in the second leg. They managed to do that in the last round but Rennes are no Bate Borisov and nor will they wilt the way Unai Emery’s side did here. Never before had Arsenal lost in France but here this time they fell without honour.

It was also the first time that Rennes have reached this stage of a European campaign and they came into the game believing they can go even farther. Arsenal hope to do likewise but progress has just become more difficult and, on the domestic front, Sunday’s showdown with Manchester United will not have been made any easier by this week’s events.

Emery, who insisted beforehand that he would not use Arsenal’s busy schedule as an excuse, deployed a strong line-up, and Mesut Özil was entrusted with his first away start since St Stephen’s Day. He was involved in the move that led to Iwobi opening the scoring.

Iwobi may have been intending simply to put the ball into a dangerous area but his low effort from the left-hand corner of the box curled into the far corner of the net – which, in fairness, is about as dangerous as you can get. The home team’s goalkeeper, Tomas Koubek, was taken by surprise and even Iwobi looked pleasantly shocked.

In the 11th minute Iwobi again made gain down the left. This time he picked out Lucas Torreira near the penalty spot and Koubek showed enough alertness to bat away the Uruguayan’s shot.

Arsenal were generally in charge even though Clement Grenier’s influence grew in midfield for the hosts. Shkodran Mustafi fired just past the post from 15 yards.

Then Hatem Ben Arfa, on his 32nd birthday, won a chance to treat himself to the present he craved: a goal to irritate Emery, once his nemesis at PSG. After being brought down by Papastathopoulous, Ben Arfa bent a free-kick from 20 yards around the wall but Petr Cech saved. Rennes kept up the pressure and soon Arsenal, from being comfortable, crumbled, their defensive brittleness laid bare.

Three minutes before the break Papastathopoulous got himself sent off for pulling down Sarr on the edge of the area after the Senegalese threatened to run clear on goal. Bourigeaud fired the free-kick into the wall and then, when the ball rebounded back to him, sent a rocket into the top corner.

Now Rennes were rocking and Arsenal had a job on just to make it to half-time, with Henrikh Mkhitaryan tempting at right back as Mustafi shifted into the centre.

With Mkhitaryan clueless in his new role, Bourigeaud began to have even more fun down the left, and Cech had to make a good block when the wide man came infield to meet a delivery from the right by Sarr. Arsenal were being overrun in midfield, too. Emery hoped that replacing Iwobi with Mattéo Guendouzi would introduce more solidity. Leaving on Özil was a puzzle, as the German was bypassed continually by the dynamic hosts.

Arsenal enjoyed a let-off in the 56th minute when Sarr tore past Monreal again and fired the ball across goal, with Bourigeaud agonisingly close to getting a touch from two yards.

Two minutes later the same player forced another save from Cech before Sarr did likewise. Arsenal, timid and sloppy, were being battered and they were not helping themselves. So it was apt that Rennes went in front thanks to an own goal. Mehdi Zeffane, who had spent most of the first half chasing Iwobi, zoomed down the right before serving a cross that deflected off Monreal and into the net.

Pride eventually kicked in and Arsenal stammered a reply, Özil forcing a save after a neat move. Rennes went straight down the other end and forced a better one from Cech, who dived full length to tip away a shot by Ben Arfa. Moments later Özil was removed from the hurly-burly and replaced by Ramsey.

Still Rennes had more zip and thrust than Arsenal. Cech was called into action yet again to deny Adrien Hunou in the 78th minute, after which Emery tried to batten down the hatches by putting on Sead Kolisnac for Pierre-Emerick Aubemeyang. But Arsenal never looked like holding on for just a 2-1 defeat. Sarr struck after James Lea Siliki became the latest player to fly past Mkhitaryan and deliver a cross. – Guardian

1 Jack Nicklaus’ Trump endorsement leads to avalanche of dismay
2 Six Nations - France v Ireland: Kick-off time, TV details, permutations, team news and more
3 World Handicap System: What is it? How does it work? Will my handicap change?
4 Ireland, France or England? Who needs what to win the 2020 Six Nations
5 Return of Conor Murray’s box kicking could exploit French vulnerability
Real news has value SUBSCRIBE
Crossword Get access to over 6,000 interactive crosswords