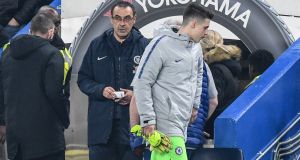 It can be difficult to maintain perspective when Chelsea enter crisis mode. Just as it was inevitable that Kepa Arrizabalaga’s Carabao Cup final mutiny would be portrayed in some quarters as evidence of football’s moral decay, so it is easy to fall into the trap of mistaking a resilient win over Tottenham as definitive proof of a unified dressing room.

Hold steady. The mood can change quickly at Chelsea, who have often given the impression of thriving on chaos during the Roman Abramovich era, and beating Spurs is unlikely to lull Maurizio Sarri into a false sense of security given he has spent most of his debut season in the Premier League pleading for patience. These are still dangerous times for a manager who cannot even make a simple substitution without it sparking an intense public-relations exercise.

That said it should be noted that Chelsea have handled Arrizabalaga’s refusal to make way for Willy Caballero before the penalty shootout against Manchester City pretty well. From looking like a hapless supply teacher at Wembley, Sarri has managed to restore some authority after putting the world’s most expensive goalkeeper in his place. Instead of striking a blow for player power, Arrizabalaga has paid the price for his disobedience, losing a week’s wages and watching from the bench as Caballero kept a clean sheet against Spurs. Perhaps any other potential dissenters will think twice about crossing Sarri now.

Or not. Even though these have been a good few days for the Chelsea manager, it would be naive of him to think his job is safe. Ask André Villas-Boas. Or Antonio Conte. Or José Mourinho.

For now a situation that had the potential to spiral out of control has been contained. There is a determination to move on from the latest Stamford Bridge psychodrama and it was telling that Caballero, who has a strong claim to start again when Chelsea visit Fulham on Sunday, emerged after the Spurs game to insist his relationship with Arrizabalaga is not broken.

“We spoke about it after the incident and it was good to have a chat,” the 37-year-old Argentinian said. “I think he learned lot from what happened. We learned a lot as a team and as a club. Sometimes these things pull players apart but in this case we are more together than ever. The boss decided to put me in goal and Kepa was supporting me in the warm-up, so I think we are in good harmony.”

So Chelsea are one big happy family – a sentiment that will prompt cynics to reply that all the resentment will spill out the next time results turn. The critics can point to supporters turning during the dismal FA Cup defeat by Manchester United, the woeful collapses away from home in recent months and the feeling Sarri’s style of play is too predictable, formulaic and monotonous to succeed in the Premier League. Optimists have less evidence to lean on, even if Chelsea have been strong at home against their immediate rivals in the league.

Yet if there is a major lesson for Chelsea to take from the Arrizabalaga farce perhaps it is appreciating the value of compromise. For the players that means not downing tools at the first sign of trouble. For the board that means accepting a manager who has never produced instant results will need time. And for Sarri it means not being quite so wedded to his philosophy and aesthetic principles.

With his system threatening to fall apart, Sarri had no option but to adapt, and the benefits of greater flexibility were clear as Chelsea dug in against City in the League Cup final and restricted them to a few goalscoring opportunities. It was the same against Spurs, who failed to muster a shot on target in a league game for the first time under Mauricio Pochettino.

Once again: take a few steps back. Spurs were hardly blown away by scintillating attacking football. Chelsea lacked a spark at times and were indebted to woeful defending for their goals, Pedro capitalising on slack covering by Toby Alderweireld for the first, Kieran Trippier entering his contender for own goal of the season for the second.

However this is not the time for stubborn idealism and Sarri has shown he is capable of playing to this group’s strengths. It was a performance straight out of one of Chelsea’s title-winning seasons, with David Luiz and Antonio Rüdiger marking Harry Kane out of the game, N’Golo Kante relentless in midfield and opponents pressed into costly errors.

No doubt grinding out a result will not sit easily with Sarri. At a club locked into a culture of short-termism, however, he needs every win he can get and he has bought himself time after enjoying a couple of important victories on and off the pitch. The question is whether Chelsea can make the peace last long enough for Sarri to make his ideas work.