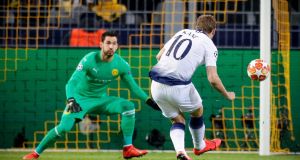 It is perhaps worth recalling the situation in which Tottenham found themselves after the third tie of this season’s Champions League group phase. With only one point on the board, even Mauricio Pochettino had practically written them off. “It’s nearly over,” the manager said. “It will be very difficult.”

Look at Spurs now. Their ride into the last 16 came complete with white knuckles but what underpinned their progress to the quarter-finals – on a memorable night at the home of the Bundesliga’s current leaders – was calmness.

There were anxious moments in a first half that Borussia Dortmund dominated but with Jan Vertonghen imperious in central defence and Hugo Lloris making a couple of excellent saves and other decent ones, they kept the home side at bay. The worry had been that one Dortmund goal would set the alarm bells ringing, as Spurs sought to protect their 3-0 first-leg lead. It did not happen.

And when Harry Kane ran through the defence after 49 minutes to display his world-class finishing touch, Pochettino’s team could coast into the last eight of Europe’s elite club competition for only the third time in their history. This was a nicely executed away-day number; a performance to advertise the steelier mentality that Pochettino has instilled. For Spurs, the sound of silence from the Dortmund crowd for most of the second half was a thing of beauty.

The statistics showed that only three clubs in Champions League knockout-phase history had progressed after losing the first-leg by three or more goals – Barcelona, Roma and Deportivo La Coruna – but Pochettino showed his respect for Dortmund and the challenge ahead by naming his strongest available line-up.

There had been no mistaking the nerves among some of the travelling fans. This is Spurs, after all. They are supposed to suffer and there had been omens that advertised the worst-case scenario. Dortmund entered the game with a 100 per cent record for clean sheets at home in this season’s Champions League and having scored at least three goals in every fixture in front of their own supporters in 2019. That said, they had been wobbly at back of late.

The first 20 minutes were always going to be crucial. Pochettino had talked about how it was imperative that Spurs matched Dortmund’s aggression and it was equally vital that they did not give the home fans in this magnificent arena anything to rally behind.

Lucien Favre left out Thomas Delaney, the Danish central midfielder, in order to accommodate Paco Alcácer and Mario Götze in the starting line-up. Götze played alongside Marco Reus in the central attacking areas behind Alcácer, and Dortmund pressed high at the outset, swarming all over Spurs.

The visitors could not get out in the first half and there were wave after wave of Dortmund attacks, as Pochettino’s 5-3-2 system looked a little narrow. It was all about keeping the shape from Spurs’ point of view, of having numbers and strength in central areas.

Vertonghen set the tone that the manager required with a magnificent saving tackle to deny Reus on 11 minutes, after Davinson Sánchez had erred to allow him in. Reus looked set to punish Spurs only for Vertonghen to stretch into a perfectly timed slide challenge.

The atmosphere pulsed and the Yellow Wall – the vast single-tier end behind one of the goals – really was something to behold; a reminder of Dortmund’s sheer scale. Spurs have based one end of their new stadium on it.

Dortmund pushed, straining for the first-half goal that would have put a different slant on the evening, but Spurs resisted. More precisely, Lloris resisted. The goalkeeper made five saves between the midway point of the first period and the interval, with two of them classics – the first from Julian Weigl’s glancing header, the second from Götze’s curler.

Spurs had one chance in the first half, but it was a big one. Christian Eriksen’s 31st-minute pass released Son Heung-min but, one-on-one with Roman Bürkl, he prodded wide of the near post with his right foot. Should he have taken it on with his left? What incensed Spurs was the nudge that the chasing Marius Wolf gave to Son. The referee, Danny Makkelie, felt there was not enough in it, which spared Dortmund the concession of a penalty.

It did not matter. When Spurs fashioned their next chance, early in the second period, it fell to the player that Pochettino would have chosen. Dortmund only half-cleared a Spurs thrust and it was Moussa Sissoko who released Kane with a slide-rule pass. The club’s most lethal finisher had only Bürkl to beat and he had the time.

Kane weighed up the situation in a heartbeat; calibrating the angles and the closeness of the chasing pack. Then he finished, putting a little lift on the right-foot shot to make it all the harder for Bürkl. When the away goal hit the net, the tie was over.

Dortmund’s build-up play had been slick in the first half, the danger they created palpable, but they lacked ruthlessness with their final passes and shots. Kane, by contrast, had scored with his first sniff of an opening. – Guardian