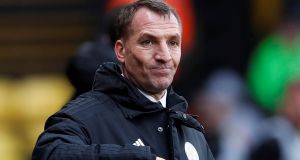 Brendan Rodgers’s house in Glasgow was broken into on Wednesday. His wife and step-daughter were in the property at the time. Photograph: David Klein/Reuters

Leicester boss Brendan Rodgers has spoken of his family’s “horrendous” ordeal after their home in Scotland was broken into while they were sleeping.

Police Scotland were called to the property in the Glasgow suburb of Bearsden at around 1.55am on Wednesday.

His wife and step-daughter, Charlotte and Lola, were in the house and a number of items were stolen but no one was injured.

The 46-year-old left Parkhead last week to take over at the Foxes, sparking anger among some Celtic fans.

He said: “For the girls to have someone come into the room, it’s horrendous really.

“I just made sure they are secure up there. We are looking to buy a house here in Leicester and they will move down very soon.

“When I got the call in the early hours of the morning you’re worried about their safety. The reaction from lots of people has been great. We’ve been given great support.

“One of our friends, Lord Willie Haughey, I rang him straight away and he was straight on to making sure Charlotte and Lola were secure. I thank him for that. I am always very focused on the football as well so it wouldn’t detract from my work.

“It’s not nice for any family to go through. It gave the girls a fright. The last 10 days there’s been a lot around my move to here but I don’t want it to detract from an amazing time we had as a family in Scotland.

“The people were amazing and the experiences we had will live with us. We will not let it, or the reaction of the last 10 days, cloud any of that.”

Police Scotland confirmed an investigation is underway with Rodgers losing several of his medals.

1 Cheltenham faces criticism after racegoers suffer Covid-19 symptoms
2 Health official says decision to hold Liverpool-Atlético game was wrong
3 Only a matter of time before British Open bites the dust
4 ‘NRL Island’ being considered in Australia to continue season
5 Karen Robinson Walton: I am looking at him. I say ‘Benjamin, what have we done?’
Real news has value SUBSCRIBE