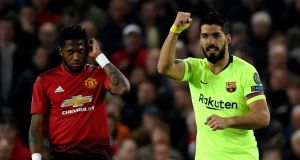 After Paris in the last round Manchester United are going to take some convincing that this result need necessarily be conclusive, and they will travel to Catalonia next week with hope. In their hearts they must know that Barcelona are not Paris Saint-Germain, however, and unless they can find a way to assert themselves in Camp Nou by seeing more of the ball and using it to greater effect they could end up with the treatment they handed out to Lionel Messi: a bloodied nose.

No one could accuse Ole Gunnar Solskjær of not setting high standards for himself and his team. “We have to try and dominate the game,” the United manager said before kick-off, possibly causing a wince in the vicinity of Alex Ferguson. Domination is not normally a card that can be played against Barcelona, as United know better than most after two painful defeats in Champions League finals. Perhaps that was then and this is now, as the ever-optimistic Solskjær might argue, yet here in the present United face a fight to finish in the top four (they are currently in sixth place) whereas their opponents lead La Liga by a tidy 11 points.

Sure enough, although Marcus Rashford went close with a free-kick and almost reached a splendid Paul Pogba through-ball before Marc-André ter Stegen, United spent most of the opening period on the edge of the area, anxiously wondering where the danger might come from as Lionel Messi, Arthur and Luis Suárez passed between each other, probing for weakness.

In the event, Sergio Busquets provided the prompt that unlocked the defence, feeding Messi with a lofted diagonal pass to allow the Barcelona captain to switch direction with a cross that found Suárez free at the far post.

That was La Liga’s leading scorer setting up La Liga’s second most prolific striker so the headed finish was never in doubt, even if it did go in off Luke Shaw’s shoulder, though the goal was initially denied by a flag for offside. That allowed Old Trafford to vent its scorn against Suárez and his Liverpool past, forcing the forward to pause his celebrations in front of the Stretford End, only for the jeers to die in the home crowd’s throats as VAR overruled the pitch officials within a minute. Who says technology is taking all the fun out of the game?

Shaw received a booking for a foul on Messi that will put him out of the second leg, before Chris Smalling got away with a worse challenge on the same player. Contact with a trailing hand was possibly accidental as the defender ploughed through the back of Messi to knock him out of the way, but Smalling was fortunate not to be penalised for a challenge that left his opponent bleeding from the nose. Smalling’s evening did not get any better when Victor Lindelöf sold him short to allow Suárez to set up a shooting chance for Philippe Coutinho, who was only denied by an alert stop from David de Gea.

United were not taking it all lying down, Rashford found Diogo Dalot unmarked at the far post five minutes before the interval, only for the 20-year-old to produce an inconclusive header, neither an attempt on target or a layoff to one of his teammates. With United having to manage on just 30 per cent of possession they must have been happy to turn round just a goal in arrears, though the domination theory was presumably still on the dressing-room drawing board.

The home side started the second half positively, with the crowd responding to evidence of a greater willingness to attack, but Rashford volleyed wide when presented with a sharp chance and then miscontrolled when Fred had found him with a defence-splitting pass. The Brazilian was one of United’s more creative players, trying with varying degrees of success to bring Romelu Lukaku into the game more, though very little got past Busquets and Ivan Rakitic in the Barcelona midfield.

Almost imperceptibly as the game entered the last half hour the visitors stepped up their efforts, with Suárez hitting the side netting from Nélson Semedo’s inspired pass and De Gea having to make another save with his legs from Jordi Alba. There was nearly a Messi moment towards the end when Sergi Roberto was effortlessly slipped into the United penalty area, though all the substitute could make of a promising position was a fairly lame attempt to return the ball to his captain, who was by then worse-placed.

Messi himself was not at his most imperious, when he brought a save from De Gea with a free-kick it was only via a big deflection. It took a good block from Gerard Piqué to stop a rampaging run from Anthony Martial at the end; otherwise Barcelona remained unruffled. In terms of containment or damage limitation United van be reasonably satisfied, but they will have to do it all again in a week, and a little bit more.