‘That was the best performance of Pep’s era, where our success, our superiority, was most overwhelming’ 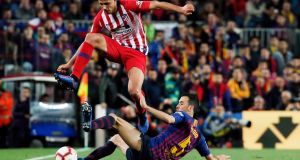 Barcelona’s Sergio Busquets slides in to tackle Atletico Madrid’s Rodri during the La Liga game at the Nou Camp at the weekend. Photograph: Pau Barrena/AFP/Getty Images

The last time Manchester United and Barcelona met it ended with a plea for mercy. There were 10 minutes left in the 2011 European Cup final when Wayne Rooney approached Xavi Hernández and, the way the Catalan recalls it, said something like: “That’s enough, you’ve won. You can stop playing the ball around now.”

Sergio Busquets, who was alongside him that day, smiles at the memory, laughing a little. Eight years on he is one of only three of the 26 men who played at Wembley who remain as the clubs prepare to meet again on Wednesday and there is nostalgia as well as joy in reliving the moment he calls “the culmination of everything, the highest point”.

Time passes but nothing passes quite like that team. Busquets attempted 82 passes against United during the final, misplacing only five; Leo Messi 100, Andrés Iniesta 115, Xavi 148. The eight players with the most passes were all Barcelona’s, collectively completing almost 700.

“They do mesmerise you the way they pass it,” Alex Ferguson said. “No one has given us a hiding like that.”

In the film Take the Ball, Pass the Ball, Michael Carrick describes Barcelona as “just too good” – words that made it all the more worthwhile, validating an ideal that Busquets represents.

“Beyond the way we enjoyed it on the pitch, that recognition from opponents – and we’re talking about incredibly important people – leaves you feeling pride and gratitude,” he says. “Sometimes you can be frustrated when the opponents are so much better but instead they said things like that. It’s the highest praise. We hurt them a lot keeping the ball; they spent a lot of time running after it.

“That was the best performance of Pep’s era, where our success, our superiority, was most overwhelming – a demonstration of how we wanted to play.”

A circle had been completed at the stadium where Barcelona won their first European Cup and its celebration added a human dimension which made it even more meaningful.

What came next, Busquets says, “reflected everything we’d been through together”. Captain Carles Puyol invited Eric Abidal to lift the trophy – six weeks after Abidal, diagnosed with cancer, underwent a liver transplant.

So much has happened since but clearly to Busquets, speaking before the first leg of their Champions League quarter-final at Old Trafford, that moment remains unmatched.

Having spent pre-season with the first team in 2008, Busquets returned to the B team, only Víctor Sánchez and Pedro Rodríguez staying up. And that, Busquets thought, was that. But 10 days later he was back. “I never expected this to happen,” he says. Within a year he had won the Champions League, beating United in Rome, one of 30 titles and counting, including seven leagues, three European Cups, the European Championship and the World Cup. He was 21 then, he is 30 now, sitting at the Spanish national team’s HQ, photos covering the wall.

“I feel proud of everything I’ve been through,” he says. “I miss it, too. It’s very difficult to reach World Cup and Champions League finals and I want to experience those things again.”

There may not be much time for a player who says he will not go on until he is 40. Others have already gone and he admits he is not so far from the days when decisions of his own will be made, determined not to “over-stretch” his career.

Alongside Busquets, only Sergio Ramos is left in the Spain team from 2010. At Barcelona only Messi and Gerard Piqué remain from 2011. Xavi went in 2015, Iniesta last summer, leaving Busquets the last member of that midfield.

“Of course I miss them; everyone misses them,” he says. “They’re unique, once-in-a-lifetime players and I spent years with them, sharing everything. We complemented each other perfectly. All came from La Masia [Barcelona’s youth academy] and it’s very hard for another midfield like that to emerge from within. We understood each other with just a look and were friends too. But that’s a footballer’s life, natural law. I’m younger than them. What matters is what we lived together.”

That final especially was the ultimate expression of what Barcelona were and what they are supposed to be. If Busquets clearly holds that dear, so do many others – a portrait of perfection against which all other teams are judged, sometimes unfairly.

Guardiola left. Under Luis Enrique, Barcelona won a treble in 2015 and a double in 2016. Under Ernesto Valverde, they won the double last season and could win a treble this time: top, with an 11-point lead over Atlético, they are into the final of the Copa del Rey and the Champions League quarter-finals. But that, it often seems, is not enough. Valverde, in particular, gets little recognition. “He has a lower profile, calmer, quieter, less mediático,” Busquets suggests, by way of explanation.

“In society and in football in Spain, achievements are not always appreciated or valued,” he continues. “No one seems to remember that not so long ago Barcelona had won only one European Cup [in 1992]. Now we have five. We know how high the demands are and try to be at that level. But, barring the occasional painful defeat, which happens to every team, this generation is beyond reproach. In terms of the trophies won and the way we’ve played, it’s been huge.”

At Barcelona the way matters almost as much as the winning. If, by his own admission, Busquets’s approach remains much the same – he smiles at the suggestion that his style sometimes induces heart attacks, insisting “you have to take risks” – the game has shifted, speeded up, and there are different men around him. He has had to adapt; team-mates have had to adapt to him. They are fortunate, he says, that one is the “chameleonic” Ivan Rakitic.

For all that the Guardiola era is idealised, culminating in Wembley, for all that some cling to it or accuse their club of losing its religion, could it be that there are elements of the game that subsequent sides have done even better?

“It’s difficult to say because teams are better prepared at all levels – physical, tactical, mental – and players are different now,” Busquets says. “I think the best era was with Pep. But football’s not the same, it’s evolved, so you can’t compare what we do now with what we did then, or what we do in the future. Before it was a very clear 4-3-3; now it’s 4-3-3 but sometimes 4-4-2. I like the 4-3-3 we had before more but, with our players, we can play any system. And ultimately the philosophy is the same.”

Not that it is only about style; it is also success. And when it comes to the European Cup it has been too long. Barcelona have not won it since 2015. Worse, Real Madrid have, three times in a row. Small wonder it has become the Catalan club’s obsession, Messi taking the microphone at the pre-season presentation, describing last year’s quarter-final defeat in Rome as a “thorn in our side” and declaring it their priority.

“Sometimes Leo’s like that; he can be shy but when he has to talk seriously, directly, he does,” Busquets says with a grin. “And, anyway, that’s his job now he’s captain. We didn’t know he was going to say that and I don’t think it was planned, but everyone wants to win the Champions League. It’s the most prestigious trophy there is, especially for us after so many years and how we were eliminated last season.”

Barcelona were knocked out in another quarter-final – their third in a row since winning it in Berlin. Why has it been so long? “Because it’s a difficult competition,” Busquets says. “It’s not only Barcelona. Apart from Madrid, who won it three years running, no one’s won it more than us [recently]. It’s true that we’ve found it hard away; we’ve not been solid enough away and against the best teams that makes it hard. Hopefully we can learn. We know we’ve got the best player in the world but that alone isn’t going to be enough.”

For Barcelona, the route there is potentially all-English: United, Liverpool, then City. “If you’re telling me we can get to the final, tell me where to sign,” Busquets says.

“It’s not the most difficult path but nor is it the easiest. United are better under Solskjær. They don’t mind letting you have the ball. Their opponents might be better technically but, as we saw with PSG, they counterattack well and they’re good at set pieces. If you make any mistakes, they’ll take advantage.”

And if it is City in the final, against the man who took you to Wembley, the moment that most stands out in a career full of them, then what? “Then we will do everything to win for our team but the admiration I have for Pep is never going to change.” – Guardian