Man City survive early scare as Agüero gets back on scoresheet 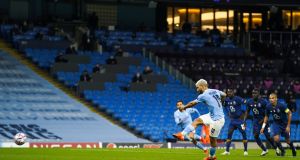 When required, Manchester City moved into high-gear, pulling away from Porto as the second half wore on. For that Pep Guardiola deserves credit for a double substitution that introduced Phil Foden and Ferran Torres, the pair combining within minutes for the latter’s decisive third goal.

It meant City began their campaign in fine fashion and in a Group C also featuring Olympiakos and Marseille will surely be hard to stop.

Guardiola’s two changes were Eric García for the injured Nathan Aké at centre-back and Ilkay Gündogan for Foden in midfield, the latter maybe removed for lacking his usual fizz in Saturday’s win over Arsenal here.

Porto arrived as Portuguese champions for a 29th time, Sérgio Conceição’s side lining up in a 4-2-3-1 to City’s 4-1-4-1. Guardiola spoke of the importance of winning an opening home group game and his team were soon into their ass-and-move rhythm.

Rúben Dias’s impressive start to his City career ended 14 minutes in. The £64.3m signing had looked the part in his first two matches but here he contrived to pass straight to Matheus Uribe. He in turn fed Luis Díaz and City’s whole rearguard fell apart. The No 7 was allowed to trot across the field from the left, pass a static Rodrigo, then João Cancelo who shied away, before beating Ederson with ease.

This was a calamity for City. But they responded instantly. Suddenly Gündogan was smacking a shot off Agustín Marceshín’s right post and Pepe was clattering Sterling and sending him to the ground. Andris Treimanis awarded the penalty, VAR vindicated the referee, and Sergio Agüero beat Marceshín, the ball going in off the goalkeeper’s body to his right.

But again City showed an unwanted penchant for self-harm. This time a pass-from-the-back sequence foundered when Ederson hit the ball to Uribe and was left stranded: the No 8 should have scored but to Conceição’s obvious chagrin the chance was spurned.

There was further flaky defending when Zaidu Sanusi skated along the left and made Ederson save from a low angle. Then, a slumbering García allowed Marega to slide in behind and City were scrambling to clear, the former finally hoofing away.

By the break Kyle Walker, Bernardo Silva, and João Cancelo had all been booked: a clear sign of how Porto were disrupting their opponents.

For the second half Guardiola rejigged tactically, going to a 4-3-3, Agüero splitting Riyad Mahrez and Sterling to his right and left, Rodrigo doing the same with Silva and Gündogan.

A combination from the latter two had Gündogan volleying a shot that had Guardiola raising his arms to celebrate only for Marchesín to save superbly to his left.This was followed by a bright João Cancelo run that swept the left-back along his flank but the cross did not threaten.

But, then, the hitherto composed Walker committed an error that allowed Díaz to move in at Dias only for Rodrigo to snuff out the danger. At this juncture the contest was open, in itself a small victory for Porto. City were certainly not the sleek proposition that dismantles sides at will.

A Gündogan free-kick found Rodrigo but his header was misdirected away from the waiting Sterling. And When Walker burned down the right his cross went clear to Agüero but the centre-forward handled.

All this was indicative of how City could not quite click. But as the match wore on they surely fancied themselves to do so as Porto’s attacking intent had faded.

Then Gündogan struck after Fábio Vieira fouled him. The midfielder picked himself up and curled the free-kick sweetly past Marchesín to give City the lead.

It also allowed them to relax despite an ever-more vocal contribution from Porto’s bench. Foden and Torres were introduced and when the former played the latter in the Spaniard allowed Marcheshin no chance.

From here City pinged the ball around at will, with Pepe lucky to stay on the field following a skirmish with Sterling. – Guardian

Liam Cahill: ‘The real good sign for me was that fellas didn’t give up on it’

Waterford’s frenzied waves of attacks too much for Kilkenny 21:49
Waterford turn Kilkenny upside down and inside on way to All-Ireland final 21:43
Liam Cahill: ‘The real good sign for me was that fellas didn’t give up on it’ 21:38
Raphinha picks a fine time to break his Leeds duck in win over Everton 20:08
Andrew Mackin orders up a double as Louth drink in Lory Meagher success 19:10

1 Jim McGuinness: There is a way to save championship and make it competitive
2 Waterford turn Kilkenny upside down and inside on way to All-Ireland final
3 Sordid murder of hurling brothers still resonates in south Galway
4 Klopp furious as injuries mount and VAR decisions prove costly
5 Liam Cahill: ‘The real good sign for me was that fellas didn’t give up on it’
Real news has value SUBSCRIBE