Tyler Toland far from giving up on her Ireland ambitions 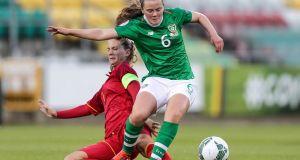 Tyler Toland in action for Ireland against Montenegro. “There’s nothing that makes you more proud than pulling on the green jersey, so hopefully some day soon I’ll pull it back on.” Photograph: Laszlo Geczp/Inpho

A little over a year ago Tyler Toland’s footballing life was just about perfect.

Her dream of becoming a professional player was realised when, at the age of 18, she was signed by Manchester City, and a few weeks later she scored the opening goal of the Republic of Ireland’s European qualifying campaign when she fired home from 25 yards against Montenegro in Tallaght. She was in “pinch yourself” territory.

But when Ireland take to the field in Kiev on Friday for their critical qualifier against Ukraine, Toland will be in Scotland adjusting to a new phase in her career having joined Glasgow City on loan earlier this month.

That game against Montenegro was the last time she played for Ireland, having established herself in the side under Colin Bell, her international fortunes changing dramatically once Vera Pauw took over from Bell in the same month.

She was an unused substitute in Pauw’s first two games in charge, and hasn’t made the squad since.

It’s hardly unusual for sporting careers to feature a blend of the highest of highs and the lowest of lows, but Toland, who became Ireland’s youngest ever senior international in 2017, just 43 days after her 16th birthday, has managed to jam both extremes in to a short enough chunk of time.

While her focus has to be on her club career for now, there’s nowhere she’d rather be than in Kiev on international duty.

“Of course,” she says, “but I wish the girls the best of luck, I hope they do the business and qualify for the Euros.”

She’d prefer not to talk about her international exile, but it’s clear that it hurts. Playing for Ireland has been part of her life since she was called up to the Irish schools side six years ago, before going on to represent her country at every underage level.

Her first team opportunities at City last season were, though, predictably limited when she was so young and new to a squad packed with experienced internationals. Pauw felt she needed to go on loan to get games under her belt, but Toland was happy to remain at the club for that first season and work with top class players and coaches.

While she was adjusting to a higher standard of football, having joined City from Sion Swifts in the Northern Ireland league, she was also battling homesickness, Toland finding her move from her home village of St Johnston in Donegal to Manchester a real challenge.

“Yeah, the past year has been hard in regards to leaving home. I’ve always considered myself to be a home-bird, and if you’d asked me two years ago I’d have said I’ll never move away from St Johnston – and now I’m sitting in Glasgow after a year in Manchester.

“So, yeah, I found it really tough, I was missing my family and friends, but when you want something so bad, they’re the sacrifices you have to make. And one of the biggest sacrifices I’ll ever have to make is moving away from home. But you have to be really determined, you’re there for a reason and that’s to play football. And that’s all I’ve ever wanted to do.”

About the only upside of the lockdown earlier this year was that she got to spend time at home.

“We were told in February that there’d be a 10-day lockdown ... and we didn’t get back for three months. I flew home to Donegal so got to spend most of that time there. So, yeah, that was one positive out of it, I enjoyed the time home with my family.”

When that period was over, the loan move, she says, felt right, not least because City had brought in another crop of big name signings during the summer, among them World Cup-winners and fellow midfielders Rose Lavelle and Sam Mewis.

Glasgow City manager Scott Booth, whose side are targeting a 14th successive Scottish title this season, enquired about Toland’s availability and when the Manchester club’s assistant manager, former Republic of Ireland international Alan Mahon, asked her if she would be interested in a loan switch, she had no doubts.

“I was really excited, really up for it. The timing is perfect, to be honest. I’m just back fit after injuring my ankle in August, I’m ready for game time as part of my development – although that’s not going to be easy at Glasgow either. There are a lot of Scottish internationals here who played in the last World Cup, so it’s going to be a competitive environment again in terms of getting a place in that starting 11. But, again, I think training day in, day out with them can only help me.

“Glasgow have been a very successful team over the years, they play Champions League football too, they reached the quarter-finals last time, so that was a big factor. I’ve really enjoyed it since arriving here, training’s been great, it’s a really professional environment, the standard’s high, the tempo is high, and the girls couldn’t have been more welcoming.

“Having [Irish international] Claire Shine here helps massively, knowing someone when you come in to a new club just makes it so much easier, so it was brilliant having someone I knew from Ireland. She’s been here a while, she knows what’s what and who’s who.”

Toland, who made her debut for the club when she came on as a second-half substitute in last weekend’s season opener against Celtic, helping create their second goal in a 2-0 win, will now hope her career path takes much the same direction as that of Katie McCabe.

After struggling to get game time with Arsenal when she joined them in December 2015, McCabe moved on loan to Glasgow City for half a season. Since returning to London two years ago, she has become an established member of the Super League side, starting the new season in exceptional form.

On Friday, McCabe will captain the Irish team in their game against Ukraine, when a draw would be enough to secure their place in the qualifying play-offs for Euro 2022.

For now, though, Toland looks on from the outside. But while her mind is fixed on settling in with Glasgow City, resuming her international career isn’t far from her thoughts either.

“There’s nothing that makes you more proud than pulling on the green jersey, so hopefully some day soon I’ll pull it back on.”