There have been four draws between the sides in last 30 years, with one game abandoned 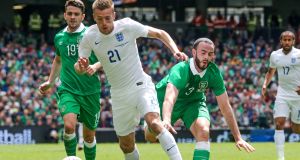 The Republic of Ireland’s Marc Wilson with England debutant Jamie Vardy during the 0-0 draw at the Aviva Stadium in June, 2015. Photograph: Gary Carr/Inpho

England’s first visit to Dublin in 20 years, for a friendly five summers ago, ended in a forgettable goalless draw. Jamie Vardy made his international debut for the visitors, replacing Wayne Rooney, with Jack Charlton and Paul McGrath watching from the stands. Robbie Brady, James McCarthy, Seamus Coleman, Jeff Hendrick and David McGoldrick all started for the Republic.

Eighty-thousand supporters packed into Wembley for the first meeting between Ireland and England in 18 years, the friendly taking place in the final days of the Giovanni Trapattoni era. Shane Long gave Ireland the lead before Frank Lampard equalised before half-time. Theo Walcott impressed for the hosts and Seamus Coleman shone for the visitors in another drab encounter.

An evening which is infamous for events off the pitch rather than on it. England were offered 4,000 tickets for the friendly match at Lansdowne Road, and rioting from the away supporters led to the fixture being abandoned during the first half. Jack Charlton’s side were winning 1-0 at the time thanks to a goal from David Kelly.

The last competitive fixture between the two sides was held at the old Wembley during qualification for the 1992 European Championships. Lee Dixon gave England an early lead before Niall Quinn levelled things up after 29 minutes. Ireland finished their qualification campaign unbeaten but finished a point behind England and missed out on a place in Sweden.

This meeting – the second game of the Euro ’92 qualifiers – came just months after Italia 1990, with the 1-1 draw in Cagliari that June still fresh in the memory. David Platt gave the visitors the lead deep into the second half before Tony Cascarino equalised in the 79th minute – honours were even at a packed Lansdowne Road.