Liverpool confident Van Dijk and Wijnaldum will be ready for Porto 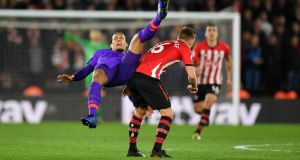 The Dutch international duo were among a number of players with problems following Friday’s 3-1 Premier League victory at Southampton that left the title-chasing Merseyside club top of the standings with five matches remaining.

“We had little problems after the game . . . Wijnaldum a little back problem . . . I think even Virg from a fall on the ground. But they all should be okay, hopefully,” Klopp told reporters.

Centre back Joe Gomez, who has been sidelined since December after having surgery for a leg fracture, could feature while playmaker Adam Lallana is still recovering from a muscle issue.

“Gomez won’t play unless he has to. Lallana has just a little thing that kept him out for the weekend and maybe for tomorrow,” Klopp added.

Last season’s runners-up Liverpool dominated Bayern Munich last month, sealing a 3-1 away win after a goalless draw at Anfield to move into the quarter-finals.

“After the Bayern game everyone spoke about the 0-0 here and everyone said that wasn’t enough. It was clear we had a chance in Munich and we used it. Now we have to face Porto with the same respect,” the German said.

“We’re on fire at the moment, you see it in training. We want to write a few proper things in this season’s book . . . it’ll be a tough one but that’s how it should be.”

Liverpool beat Porto 5-0 on aggregate in last season’s round of 16, with all the goals coming in the first leg in Portugal, but Klopp stressed they should not underestimate their rivals.

“We didn’t want Porto, to be honest . . . people with a proper idea about football didn’t. That’s the truth. But nobody wanted Liverpool,” he added.

“It’ll be tough but we’re really looking forward to it.”

1 Ireland v Scotland: Doris’ day as Caelan set for first cap
2 Six Nations: Pundits, journalists and players have their say
3 Ashleigh Barty now living up to all her earlier promise
4 Gary Lineker: ‘60 is just a number, 70 is the one to worry about’
5 Niall Quinn and Gary Owens reassure FAI staff about future
Real news has value SUBSCRIBE