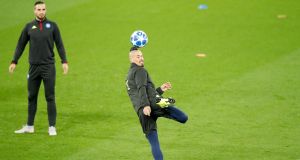 Napoli’s Marek Hamsek during training at Anfield ahead of their Champions League clash with Liverpool. Photo: Martin Rickett/PA Wire

Our responsibility. Our mistake. The words peppered Jürgen Klopp’s pre-Napoli press conference, leaving no doubt that blame for Liverpool’s Champions League predicament rests on their doorstep. Opportunity for salvation resides there too. Anfield knows the script so well. “I know it will be difficult,” their manager said, “but I can not help think about it without a smile on my face.”

Liverpool have backed themselves into a corner in Europe once again as a consequence of losing three away games in a group for the first time. Carlo Ancelotti, the Napoli and former Milan manager, needs no schooling on his opponents’ powers of recovery. A 1-0 win or victory by two goals at Anfield will guarantee Liverpool qualification for the knockout phase. Defeat to an Italian club that has never won in England, combined with a loss for Paris Saint-Germain at Red Star Belgrade, and the new Premier League leaders will be out of European competition completely nine months after reaching the Champions League final. Their manager sees only an opportunity to rectify a campaign of contrasts.

“We are in a good moment for weeks and months as a club and a team, we have to use it,” Klopp said. “One of the most difficult teams to play at this moment is Napoli. They were already really strong last year and have adapted really well to the little changes Carlo Ancelotti made. They are a really good side but we are as well.

“The competition is like this. You play the strongest teams and if you want to go through you have to win. We didn’t win often enough to be through already. That is our mistake and now we can put it right if we perform. We all know the results we need and it is quite difficult. Napoli are good in possession, counterattack as well, typical Italian team good at defending. It’s a big challenge but if something special is possible it is here and that is why we should try.”

Liverpool have reserved their poorest performances – their only poor performances of the season so far – for their European travels, with the 90th-minute 1-0 defeat in Naples setting the tone. Away from home Klopp’s team produced a total of five shots on target in three matches, including James Milner’s penalty in Paris, whereas two matches at Anfield have yielded seven goals and maximum points. Liverpool are unbeaten in 18 European home games since Real Madrid’s visit in October 2014.

“The first game against Napoli was that bad from our side that we can improve everything,” Klopp said. “We didn’t defend for a second like we wanted and we didn’t play like we wanted to play with the ball. But that was six weeks ago. No team in the world are perfect. We are not and Napoli are not. We all have weaknesses.

Anfield is not the only foundation for Klopp’s confidence. His team could not have timed better their move to the top at Manchester City’s expense, certainly not in terms of preparation for Napoli, while another clean sheet at Bournemouth, Mohamed Salah’s hat-trick and the increased involvement of Naby Keïta plus Fabinho in midfield adds to a sense of growing momentum.

The pursuit of a first league championship since 1990 may be assisted by an early exit from the Champions League, it has been suggested by Gary Neville and others, but Virgil van Dijk gave that idea short shrift.

“I don’t think they are Liverpool fans,” said the central defender. “We want to compete on the highest level. We are top of the league now but it could change next week. You never know. The main thing is to stay at the highest level and to do everything we can to go through. It is going to be a tough game but I am very confident, like always in my team.

“We need to start like we always start at home in the Champions League. We wanted to do that away too but it is not as easy as people might think. We need to start fast, set the tone, put them under pressure and play our game. Be brave, be confident and don’t hide. Show yourself.”

Van Dijk has refused to contemplate the possibility of dropping into the Europa League “or worse” after tonight’s game. His manager does not believe Champions League elimination, should it come to pass, will have a lasting or detrimental effect on Liverpool’s prospects of pushing City all the way in the league.

Klopp said: “It is a different competition. If we are not a Champions League club in January/February it will not be one second an excuse for anything else. We do not need to make this game any bigger than it is but it is big. That is exactly how we want to make it. As an opportunity for us. Stay in the competition. The boys, I know, are desperate to stay in the competition.” – Guardian service