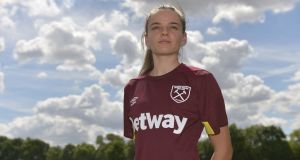 Leanne Kiernan: “The standard is so high, especially when you’re coming up against the likes of Arsenal, Manchester City and Chelsea.” Photograph: Arfa Griffiths/West Ham United via Getty Images)

Since she started her life as a professional footballer when she left her home in Bailieborough, Co Cavan during the summer to join West Ham, Leanne Kiernan has learned many things.

“You don’t realise how much your mother does for you until you actually move out of home,” she says.

Those earliest days in the 19-year-old’s east London apartment were, she admits, a challenge.

“I’d say I cooked the same dinner the whole first week – burger, spuds and peas. It reached the stage where I never wanted to see them again.”

She rang her mother to get help on extending her culinary repertoire, and was back on the phone again when the washing machine got the better of her.

“Nightmare. I put on my first ever wash the day I arrived and it must have been going for two and a half hours. I was looking at it thinking, ‘this doesn’t happen with my mother’s’. I spent half the time on the phone with her asking ‘what button do I press?’ I ended up having to buy everything brand new again, I wrecked all my clothes. I think it was too hot.

“So it’s been a big eye-opener. But I’m a pro with the washing machine now. And the cooking . . . sure look, I’m still alive and it’s been five months, so I’m doing alright.”

The football has been the easy part of this adventure?

And it’s an adventure she had initially been reluctant to take on despite attracting the interest of American colleges and several clubs in Britain.

Her hat-trick for Shelbourne in the FAI Cup final two years ago this month, followed by the ease with which she adapted to senior international football, made her one of Ireland’s brightest prospects, but she couldn’t imagine leaving family behind and the pig farm on which she grew up.

“I was content there, I loved being on the farm, I was in my comfort zone, it was outside the box for me to even think about going to England. But it got to a stage when I thought about all the effort I’d put in to football, my Dad driving me to training three and four times a week, so to just waste all that, to waste my talent, not do anything about it, I decided I couldn’t turn down the opportunity.”

West Ham proved to be the perfect fit.

She was impressed by their facilities when they invited her over to London, and she warmed to the homely atmosphere around the club. When they offered her a full-time professional contract she decided to go for it, deferring for a year the agriculture course for which she had been accepted at the Dundalk Institute of Technology.

Having been playing in the third tier of English football, the club had been awarded a licence for this season’s Super League, giving Kiernan the chance to mix it with some of the best players in the game.

The adventure couldn’t have started more brightly, the teenager beating Marko Arnautovic to the club goal of the month award for August for her effort against Lewes in FA Continental Cup, curling the ball in to the top right corner from outside the box.

Their Super League campaign began shakily, though, with three defeats in their first five games, but the ship has been steadied since, two victories on the trot lifting them to sixth out of the 11 teams.

“The standard is so high, especially when you’re coming up against the likes of Arsenal, Manchester City and Chelsea. It’s taken us all time to adapt, you learn pretty quickly that there is no room for mistakes, that you can’t take an extra touch, you need to move the ball. Colin Bell with the national team has really helped me a lot with that too, by developing my game, helping me think quicker.

“Above all, you just need to work really hard. I was at the Katie Taylor documentary the other day, it was brilliant. It was eye-opening how much training she does, how much she’s sacrificed to get to where she is.

“Sometimes I think people forget what the likes of Katie have to do to get to where they are. She’s dedicated her whole life to it, but look at her now: champion of the world.”

Kiernan, who is currently nursing a torn hamstring but expects to be back in action in January, will make no decisions about the future just yet, for now she’s just enjoying the experience and the level of football she’s competing in. She misses home alright, but the club and her teammates have helped her settle in.

“I’m very, very close to them, I can talk to everyone of them if I need to, and the coaching staff too. We’re all like a family, when you go in they give you a hug every morning, they welcome you, it’s genuinely a nice environment.

“We’re well looked after. They put around 10 of us up in a nice apartment block, I share with my team-mate Erin Simon who’s great craic. The training pitch is only five minutes away, we train in the same place as the men, but they’ve built a women’s section which is nice, we have our own living area where we can play X-box and darts and watch telly, it’s nice that we’re not all clumped in together. The facilities are great, a lovely pitch, it’s professional, I like it.”

Around half the squad is English, the rest made up of players from the Netherlands, Germany, the United States, New Zealand – and Bailieborough.

“You’d want to hear them slag my accent, they don’t understand a word I’m saying. One of the girls got in to the lift when my Mam and Dad were over at my apartment. Her English wouldn’t be great. She said ‘ah, I was chatting to your parents’. I said ‘did you understand them?”. She said, ‘not a word’. When they’re doing their English lessons they’d be asking me would I like to join in with them. They give me a terrible time. But don’t worry, I can give it back.”

Has your mother’s workload halved since you went to West Ham?

“I’d say it’s more than halved. She’ll have no wrinkles when I go back, I won’t know her.”

There’ll be a clip ’round the ear waiting for her in Bailieborough when she’s home for Christmas. But, she hopes, not burger, spuds and peas.

Gerry Thornley: Saracens very late to apologise for repeated cheating
Here is your handy guide to sport on television this week

1 Gordon D’Arcy: There’s more to Saracens’ success than money
2 Gerry Thornley: Saracens very late to apologise for repeated cheating
3 Shane Lowry agreeing to play in Saudi Arabia is an unfortunate choice
4 José Mourinho feels Troy Parrott isn’t ready to step up yet
5 Mourinho insists there is no problem between him and Danny Rose
Real news has value SUBSCRIBE
Crossword Get access to over 6,000 interactive crosswords