Lionel Messi reminds Mohamed Salah who the real master is 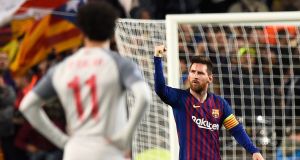 There was a moment at the end of this game – like so many other Lionel Messi moments – that you felt like pulling out of the air, taking home and keeping on a constant loop in the front of your brain. Like all the best Messi bits it was a moment of jaw-dropping skill. It was also very funny.

In the last seconds of stoppage time, with Barcelona already 3-0 up, Ousmane Dembélé led a breakaway from a Liverpool corner. Inside him Messi chugged forward, legs pounding the grass, battery draining, not so much eating up the ground as grimly chugging it down.

Dembélé gave him the ball. Messi stopped and played a pass of genuine absurdity, a waggle of the hips throwing every covering grey shirt towards the far corner flag, like sailors tossed by a wave, as he slipped the ball back to Dembélé in front of goal. It was the old Messi paradox: how is it possible for one man to spot something nobody else among the 90,000 other pairs of watching eyes can see, to pull these angles out of the air, these planes of movement?

Brilliantly Dembélé even managed to miss, shooting weakly at Alisson. Messi flopped face first on the grass as the whistle blew for full-time. By that stage the best player in this world or any other had written his name all over another Champions League semi-final. Throughout the second half Messi had come at Liverpool in waves, producing those hypnotic little turns where suddenly the day stops and only one man seems to be moving. But that wasn’t the whole story. Liverpool did run Barcelona close in the opening hour, led by Mohamed Salah.

For a while this even looked like it might just have been Salah’s night, or at least an occasion where he seemed ready to trade blows with the best. Salah had never played at the Camp Nou before Wednesday night. He was instead an unknown quantity in the flesh, a player yet to be measured against Barcelona’s own scurrying little master of the left-footed arts.

It was a mixed night for the Premier League’s top scorer. The real difference between Messi and the rest? The moments never seem to pass him by. With Liverpool 3-0 down and eight minutes left on the clock Salah hit a post when he had to score.

Instead he smashed a loose ball against the post with his right foot, holding his head as the rebound skittered away. It felt like a blink at exactly the wrong moment; not to mention a betrayal of what had gone before, because Salah did play well here.

It would of course be wrong to say that in his best moments he lost nothing in the comparison with Messi. Everyone loses something there. This is a player who did for Manchester United last month with a hamstring injury and part of Phil Jones’s fingernail lodged in his eyelid. But for a while in the first half this did feel like a duel at one remove, a pair of high-craft flyweights trading combinations.

With 10 minutes gone there was that first passage of point-counterpoint. First Salah hurdled inside Clément Lenglet, erasing his man with a jink, confirmation that there was another player out here with the capacity to make the game bend to his will. From the turnover Messi ran hard at Liverpool’s defence, taking the shortest route to goal. Moments later there was a glorious drive back from Salah as he stamped down on the pedal and surged away on a 40-metre dribble, slipping the ball through Arturo Vidal’s legs without breaking stride.

Barça took the lead in the middle of this. The goal came from a moment of slackness on the Liverpool right, mercilessly exploited by Jordi Alba and the scorer Luis Suárez. After which there was a period where Messi went into another place. Deep in his own half he conjured an improvised dink-dribble that brought the stadium to its feet with a roar. Moments later he performed an elastico-style trick-pass to slip the ball past his marker that seemed to defy some basic rule of physics. Messi doesn’t do gratuitous flash. This was just a great player rising to the day, a glimpse of the levels beyond the everyday brilliance available elsewhere.

It seemed Liverpool might ride that storm. Salah kept coming, always eager to run at his man. But this was always Messi’s stage. A tap-in made it 2-0. The free-kick for the third was a thing of astonishing craft, the ball howling hard and flat into the top corner in a thrilling arc.

To their credit Liverpool and Salah came here to play. But as so many have found before, the game just seemed to bend itself around the man with the shuffle and the feint; who is now just a breath away from another final. - Guardian

3 Jackie Tyrrell: every corner-back is an island now