Ederson's become a vital piece in the Manchester City jigsaw 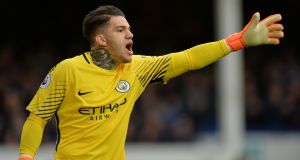 Manchester City’s Ederson: “I was impressed with the precision he had with the ball at his feet, and his quickness and agility in goal.” Photograph: Reuters/Peter Powell

Pep Guardiola was a few months into his Manchester City adventure when his team lost 4-0 at the Camp Nou. City had done okay until the 52nd minute when goalkeeper Claudio Bravo attempted to play the ball out of defence. It backfired terribly as possession went straight to Luis Suárez, and Bravo made matters even worse by handling the Uruguyan’s attempted lob outside his area to get sent off.

It was not Bravo’s first mistake in City colours, nor his last. But Guardiola made clear that night that he would never abandon his strategy of playing from the back. “I’m sorry, but until the last day of my career as a coach I will try to play from our goalkeeper,” he said.

It may not have worked in 2016-17 when the Catalan played Bravo and then Willy Caballero in goal, ending the season trophyless, but in the summer he spent £34.9 million on Ederson from Benfica and City have not looked back.

They have won their first trophy of the season – the Carabao Cup – are one victory away from securing the Premier League and go to Liverpool on Wednesday for the first leg of their Champions League quarter-final. Finally they have a goalkeeper good enough for a club with aspirations to be among the world’s best.

Perhaps it is no wonder that Ederson, who has conceded 26 goals in 38 City appearances, ended up playing for Guardiola. The Brazilian grew up idolising Rogerio Ceni, the former Brazil international who is the top-scoring goalkeeper of all time with 131 goals in his 25-year career at São Paulo.

“He is my only idol, and will always be my main inspiration,” Ederson said. “I still watch many of his videos making amazing saves and showing his quality to start his team’s play from the back. His quality was extraordinary.”

As a boy Ederson spent hours watching Ceni on TV from the family home in Osasco, a rough area in Greater São Paulo, but he started as a left-back at a football school called Champions Ebenézer FC.

“He came because his older brother was playing with us,” says Gilberto Lopes, better known as Giba and one of its founders. Giba created the charity team to help youngsters growing up in one of the most violent parts of the suburbs of São Paulo. “As Osasco is a very dangerous town we have to give a lot of attention to the children. Football is weapon that I use until this day to get the boys off the street.

“As he is left footed I started playing Ederson at left-back. He already had a powerful shot but he did not carry ginga [have the rhythm] for dribbling, so I pulled him back to be a keeper. With the first shot he caught the ball without dropping it, and that was the beginning.”

Giba was impressed with the progress of this thin (5ft 9in and 123.4lb aged 13) but promising pupil, whose nickname still is, ironically, “Gordo” (fat boy), and recommended him to a friend at São Paulo’s academy.

“I was told that Ederson was already standing out as a goalkeeper,” says Antonio Rodrigues, Ederson’s first coach in the under-13 team, who has been at the club for 18 years. “I was impressed with the precision he had with the ball at his feet and his quickness and agility in goal.”

Ederson’s talent with his feet had been shaped in futsal (a variant of football played on a hard court). “That helped him a lot,” says Victor Severo, a childhood friend from Osasco who also played for São Paulo’s academy and lives with the Ederson family in Cheshire. “He used to play as a goleiro-linha [the so-called “fifth man”, a goalkeeper who joins the outfield players] to take advantage of his powerful shot. Due to that our main tactic was to clear space so he could come from his box to shoot. He was so good with his feet he was challenging to become the tournament’s top scorer.”

At São Paulo Ederson was initially well regarded. “São Paulo had a plan to produce Rogerio Ceni’s successor, so our training sessions with the boys had a big focus on footwork,” says Luiz Batista da Silva Junior, the then goalkeeping coach at youth level. “Although he was very shy Ederson paid attention to all exercises, was quite focused and learnt everything quickly.”

But then Ederson’s dream turned into a nightmare. The phone rang, his mother, Joelma, answered and she was told by a member of São Paulo’s staff that the young goalkeeper was no longer needed.

“It was very sad,” says Severo. “It is terrible to receive this kind of news face to face; imagine how it was for him to find out that way, without a convincing justification. Obviously he will never forget the moments he had at the club, but the way he was pushed out is also hurtful. He cried a lot.”

Ederson was encouraged by Giba, his mentor, to resume training in Osasco and it was then that another call changed Gordo’s life. Someone linked to Jorge Mendes, the Portuguese super-agent, asked Antonio Rodrigues, Ederson’s former coach, whether he could recommend a promising goalkeeper. “The first name that sprang to my mind was Ederson’s,” recalls Rodrigues. “I kept him in mind because of his huge dedication in training. When the person asked me about Ederson’s best qualities, I clearly remember saying about his distribution, dynamism and agility. Also I said: ‘I am sure that if he goes to Europe he will not come back’.”

So Ederson joined Benfica’s academy aged 16. In Portugal he moved to the second-tier side Ribeirão and then Rio Ave before returning to the Stadium of Light, where he supplanted his countryman Júlio César and grabbed Guardiola’s attention.

The next call he expects is from the Brazil coach Tite to go to Russia 2018. Claudio Taffarel, the 1994 World Cup winner and current Brazil goalkeeping coach, says: “When I started working with Ederson I wondered what his ‘unemotional’ behaviour was all about. I suspected that it could be excessive fear, as he was quite introverted and barely spoke.

“But over time, after we developed a good relationship, he began to open himself more, both in training and off the pitch, and I noticed that calmness is a very positive part of his personality.”

Ederson, since joining City for a British record fee for a goalkeeper, has proved the doubters wrong not only with his efficiency as a shot-stopper but also – and mainly – with that composure in possession whatever the pressure.

“Pretty cold-blooded” is the description used by Taffarel, though he emphasises that Ederson is not the finished article. “He still has room to improve his decision-making, which we always talk about.”

Ederson’s form has established him as Brazil’s number two, behind Roma’s Alisson. Although the 24-year-old has only one cap it would be a shock if he were left out of the World Cup squad.

“In spite of his young age he is impressively secure and this security is naturally transferred to the team in a very productive way,” Taffarel adds.