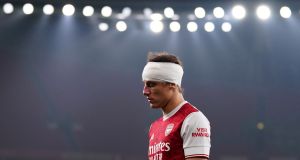 Arsenal’s David Luiz played on until half time after his head collision with Raul Jimenez. Photograph: Getty Images

Trials of additional permanent substitutes for concussion injuries in the Premier League could begin early in the new year, the Guardian understands. The news comes after Wolves confirmed that their striker Raúl Jiménez had surgery on a fractured skull after a sickening clash of heads with Arsenal’s David Luiz on Sunday evening.

Wolves said that the Mexico striker was “comfortable” after the operation. “He has since seen his partner Daniela and is now resting,” the club added in a statement. “He will remain under observation for a few days while he begins his recovery.”

The incident has led to renewed calls for extra substitutes to be introduced for head injuries and Lukas Brud, the chief executive of the International Football Association Board, told the Guardian that it would be the lead item on the agenda when Ifab met on December 16th. Brud also said he hoped that if the protocols were approved, they “would be trialled as soon as possible”.

The English Football Association has already said it will introduce the new rules for the FA Cup once they are approved by Ifab, and while the Premier League is yet to comment publicly, it has previously indicated that it is keen to be part of any trial. The Guardian understands that their position has not changed – although it is stressing that the clubs will have to see, assess, and give the green light to Ifab’s new protocols first.

Under the new rules, both teams in a match would be given an extra substitute if a player left the pitch with a head injury, thus ensuring neither club is disadvantaged by a concussion.

Brud told the Guardian that the new proposals were based on recommendations made by Ifab’s concussion expert group, and he hoped they would have wide support across the game. “The expectation is that we will be discussing the new protocol and a timeline on December 16th, with the idea of allowing the new rule to be trialled as soon as possible in 2021,” he said. “We expect and hope competitions will come forward and participate in the trial.”

Meanwhile Headway, the brain injury association, has expressed its “anger and disappointment at football’s continued failings to protect its players from concussion” after the incident at the Emirates on Sunday that left Jiménez in hospital. Headway deputy chief executive Luke Griggs also expressed his concern that Luiz had kept on playing despite blood seeping through the bandage on his head before being substituted at half-time.

“Too often in football we see players returning to the pitch having undergone a concussion assessment only to be withdrawn a few minutes later when it is clear that they are not fit to continue,” said Griggs. “That is the very reason why we urgently need temporary concussion substitutes in football.

“The concept of having a permanent substitute as opposed to a temporary substitute doesn’t really make an awful lot of sense to us. That could actually be even more problematic in as much as with concussion you need a degree of honesty from the player themselves to say whether or not they’re feeling a bit groggy, whether they have got blurred vision. You simply cannot take a risk with head injuries. Something is not right. This cannot be allowed to continue. How many warnings does football need?”

However, Arsenal manager Mikel Arteta insisted that the club had followed all the Premier League protocols. “He responded really well to all of them,” he added. “David wanted to continue but at half-time we decided to take him out because he wasn’t comfortable heading the ball.”

Arsenal’s decision was also defended by Watford striker Troy Deeney, who told Talksport that “as a player you know when something is not right”. “How many things have already been taken away from players?” he added. “You are already told how much you can run, how much you can’t by sport scientists. At some point there has to be an element of trust between player and doctor. You do have all the protocols in place.”

However Dr Ross Tucker, who is part of World Rugby’s concussion team, said that Deeney had underplayed the risks. “He frames concussion decisions as something ‘being taken away from the player,” said Tucker. “It’s difficult to trust players when the prevailing culture sees it that way, rather than protection against harm.” - Guardian