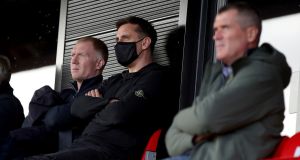 Paul Scholes has been appointed caretaker manager of Salford City after the club sacked Graham Alexander on Monday.

Alexander, who was appointed in May 2018, was removed despite Salford being unbeaten in their opening five League Two games and standing fifth, a point outside the automatic promotion places, following two wins and three draws.

A statement from the club said: “Salford City announces that manager Graham Alexander has left the club with immediate effect. The club met with Graham this morning and after discussion have agreed to part company. The club would like to thank Graham for his contribution and all his hard work. In his first season he guided the team to Wembley, resulting in promotion to League Two, and in his second season he reached the EFL Trophy final. The club would like to wish him all the best and success in the future. First team coach Chris Lucketti will also leave the club.

“Paul Scholes will act as the interim head coach while the club looks to secure a new manager. [Reserve team manager] Warren Joyce, currently in isolation, will join Paul [as assistant] once he is able to.”

Scholes is one of the six “Class of ’92” owners – alongside David Beckham, Ryan Giggs, Nicky Butt and Gary and Phil Neville – who collectively control 60 per cent of Salford, the remainder being retained by Peter Lim, a Singaporean businessman.

The 45-year-old previously managed Oldham for seven games in the spring of 2019, winning one, drawing three and losing three before he resigned after only 31 days. Scholes claimed he walked away because Abdallah Lemsagam, the owner, had not allowed the control he had been guaranteed.

“In the short period since I took on the role it unfortunately became clear I would not be able to operate as I intended and was led to believe,” he said at the time.

This is Scholes’s second stint in temporary charge of Salford, having been the joint temporary manager in January 2015, alongside Phil Neville, for a match against Kendal. – Guardian