Manager bemoans ‘penny-pinching’ board, but ignores team’s problems in defence 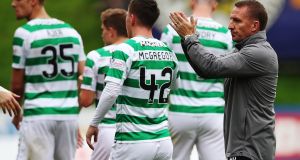 That storm clouds gathered over Celtic Park at all was surprising enough. For Brendan Rodgers – the revered, untouchable Brendan Rodgers – to have summoned them was even more so. It will mark a blow to the ego of Celtic and their manager that this evening involves a Europa League play-off first leg in deepest Lithuania against Sudova. Rodgers’ team have regressed, as he knows all too well.

The Europa League is a sensible environment in football terms for Celtic, even if a sense of entitlement means one would struggle to find those within the club happy to admit as much. In Champions League campaigns of the past two seasons Celtic have returned six points and one win. Acknowledging the talent of opposition – Manchester City, Bayern Munich and Paris Saint-Germain – is reasonable so long as home defeats by Borussia Mönchengladbach and Anderlecht are also factored in. Celtic, once a European force, were feeble also-rans.

Rodgers, whose European record at Liverpool was sketchy, has done little to suggest he is willing or able to adapt game plans to cope with Europe’s elite. Barcelona and PSG both scored seven against the perennial Scottish champions. As Rodgers bemoaned financial disparity, basic and recurring shortcomings – especially in defence – were largely ignored. Rodgers has spent two seasons in Glasgow without fixing the one area of the team screaming out for attention from the moment he arrived. No manager in Britain would have been afforded the same planning scope as Rodgers 12 months ago, with the retention of the Scottish title a certainty and Champions League income again banked.

The gift-giving Celtic defence was at it again as AEK bundled them out of this season’s Champions League at the qualifying phase. The Greek team played with 10 men for the closing half-hour in Glasgow but earned a 1-1 draw. That Celtic should have available resources to see off AEK was ignored, handily for Rodgers, as his frustrations regarding summer transfer activity were laid out – more than once.

For the Northern Irishman to have used the eve of the first AEK leg to fire bullets publicly at Celtic’s board was odd unless he foresaw defeat. Traces of Rodgers’ annoyance had emanated in late July, when he distanced himself from a deal to sign Daniel Arzani, the young Australian who joined Manchester City before an immediate loan to Celtic. Whether Celtic should routinely be developing players on City’s behalf is one interesting subplot.

Weeks later Rodgers was more profound after Celtic’s procrastination over John McGinn allowed Aston Villa to coax the midfielder from Hibernian. “There are still a few key areas where I want to bring in quality and thus far we haven’t completed on it – not a lot of players, but we needed quality,” Rodgers said. “You have to do that when you are in a strong position. I am not sure the club has been in a stronger position this summer than what they have been for quite some time.”

Although the detail is different, there is a parallel with Rodgers’ disenchantment regarding transfers during his latter stages at Liverpool. After AEK swatted Celtic aside, Rodgers again bemoaned what he perceives as Celtic’s unwillingness to bolster personnel from a lofty standpoint.

Dedryck Boyata, the best of an average central defensive lot, did not play amid a dispute with the club over whether he could be sold. It never rains.

Spending has rocketed on Rodgers’ watch. Celtic’s annual return for 2017 showed staff costs at £52 million, a leap from just short of £37 million a year earlier. This is perfectly reasonable for a club which had secured back-to-back Champions League qualification, but Rodgers’ paymasters – some of whom were seriously irked by this public show of dissent – should have questions of their own regarding recruitment.

It would seem churlish not to regard Moussa Dembélé as a Rodgers-fuelled success, even if moves were afoot to sign the French striker before the manager took office. Scott Sinclair enjoyed an excellent first season at Celtic but has regressed badly. Olivier Ntcham, a £4.5 million signing from Manchester City, should develop into a sellable asset.

For so many of Rodgers’ signings, doubts are legitimate: Dorus de Vries, Cristian Gamboa, Eboue Kouassi, Jonny Hayes, Kundai Benyu, Marvin Compper, Charly Musonda and Jack Hendry. The expensive continuation of a strange Celtic love affair with another City loanee, Patrick Roberts, was not justified by performance. Rodgers hailed Lee Congerton when appointing him as head of recruitment; the net result has been so negligible that Emilio Izaguirre has returned to the club, aged 32, a year after leaving for Saudi Arabia.

Rodgers is fiercely protective of his reputation, just as he is ambitious

There was always the likelihood that Rodgers’ own, dreamy picture of what working for Celtic means would not be matched by ambitious and money-driven footballers. It was always fanciful that Celtic would swap a successful business model on the want of one manager. Let alone, that is, one who cannot seem to make European headway. Rodgers himself had cited the Scottish football scene – plastic pitches, among other things – as problematic in respect of attracting players after another meek European surrender, this time to Zenit St Petersburg, last season. Thereafter Celtic spent a record fee securing Odsonne Édouard permanently from PSG.

The Celtic DNA of Rodgers is significant here and the reason many supporters will turn against what they perceive as a penny-pinching board. Rodgers is fiercely protective of his reputation, just as he is ambitious.

Yet the folly would be in insisting Celtic should be wholly beholden to Rodgers. In return for delivering back-to-back domestic trebles, one of which was the consequence of an unbeaten season, the 45-year-old has been afforded God-like status.

Celtic have been every bit as good at rejuvenating Rodgers’ circumstances as vice versa. Until this season, in which Rangers look to have got their act together under Steven Gerrard, the home opposition has been terribly weak. Gordon Strachan took Celtic to the last 16 of the Champions League twice at a time of relative downsizing and while engaging in fierce title battles. Neil Lennon famously defeated Barcelona en route to the same knockout phase at a time when recruitment was as first class as tactical planning for giants. Rodgers, meanwhile, has been exposed at that top level to the point where meaningful progress in the Europa League would be handy for his own profile.

By Saturday Rodgers had hilariously claimed “some people will try to dismantle” his relationship with the Celtic board. If this hinted at backtracking, the sense that Rodgers and Celtic have opposing and polarised views of the future remains real. One night in Lithuania is rather symbolic of that. – Guardian