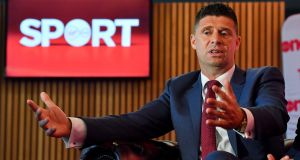 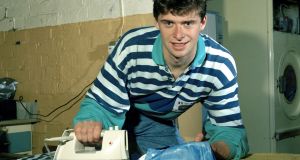 After he had referenced the short time it would be taking him to drive from his house to the studio on matchdays, Tommy Martin had to good naturedly confirm from the stage at Thursday morning’s launch of Virgin Media football coverage for the coming season that Niall Quinn wasn’t just getting back into the TV punditry because it was handy.

“It’s a part of it,” replied the former Ireland international who has spent his year away from our screens busily trying to build the two businesses with which he is involved, ecommerce venture Fanzfirst and secure online connectivity firm Netcelero.

It wasn’t long after he had stepped aside from Sky, he says, before he was back watching games regularly and occasionally getting worked up over passages of play, big refereeing decisions or what was being said about them. And so he suggests – given the short journey time to Ballymount, of course – he is happy back providing his take on things to a wider audience.

He returns as the rebranded TV3 and its new sports channel substantially beefs up its output and his former club Manchester City’s dominance seems set to grow.

Quinn still sounds as though he is still struggling to get to grips with the extent to which things have changed since he left Maine Road for Sunderland 22 years ago.

“I was invited over recently and got a tour of their academy,” he says, with a slight sense of wonder. “It is a university in my book, it’s not an academy. The infrastructure that’s there: the physical infrastructure in terms of stadia . . . it is like landing in another place and looking out the window at these spaceships, which are actually mini-stadiums behind closed doors.

“Stadiums for the senior team, the women’s team, the under-23s: and I’m talking about stadiums, not pitches. There are 14 other pitches there. There are probably more groundsmen than players. It’s a frightening aspect of their attempt at world domination.

“We tried to build an academy at Sunderland and it took us nearly six years. It was a long, painful slog to get it going. But with Man City things appear to be growing and growing, the brand is getting bigger, they have their other clubs around the world. It’s frightening. It’s a truly global play.

“When I look back,” he continues, “we weren’t allowed to swap our shirts. We had a long sleeve and a short sleeve, home and away. After the last game, if you had done okay that year, you could give them away at the end of the season. Most of the time they wanted to keep them for the reserves the following year.

United were the dominant force back then and the Dubliner freely admits to taking a certain pleasure at the way the tables currently seem to have been turned, although he suggests that the season just started will be made all the more interesting by the efforts made around Old Trafford to get back on top again.

“I think it’s great now that Manchester United are a little bit on the back foot; they’ll now be tested and it’s a huge ship, so to turn it around again and make it the dominant force is a huge ask.”

Jose Mourinho, he suggests, might have handled his grievances over United’s transfer dealings a little better but Quinn does seem to acknowledge that deep down the Portuguese might have a point, making a comparison with City’s activity in the market in the summer of 2017.

“When the big discussion was had last summer, we were all looking at centre halves: ‘he needs centre halves, to replace the captain who has been around a long time and is unfit all of the time’. Then all these full backs come along. There is no way that a Manchester City executive with a degree from Harvard came up with that one; that was Pep Guardiola.”

Still, he feels, Mourinho needs to focus now on getting the best out of what he has because, he says in reference to Paul Pogba, “I looked at the Brighton game and I wouldn’t have singled him out as a World Cup winner”.

It is all, he says in any case, a very different world to which he played then ran a club. “The money is ferocious now,” he says. “Twelve years ago, we bought an incredible football club for less than the club paid for a left back six years later. And the left back,” he recalls with a grin, “didn’t work out too well.”

1 Red Bull poised to protest over Mercedes’ new steering system
2 Monica Seles: The warrior queen who could have been the best ever
3 The Best of Times: Ireland’s Golden Generation make Grand Slam history in 2009
4 Welcome to Iten in Kenya – home of champions and cheats
5 Nairo Quintana sustains suspected knee injury after being hit by car while training
Real news has value SUBSCRIBE
Crossword Get access to over 6,000 interactive crosswords