Mourinho should beware the affable but ruthless Woodward

For Manchester United chief executive, financial success is vital but 21st title is the holy grail 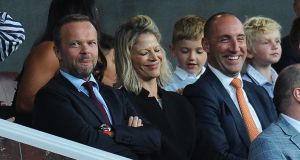 Ed Woodward is the Manchester United executive vice-chairman whose current brief has him in Red Adair mode for the first time since he took up his position five years ago.

Put simply the businessman from Essex is charged with solving the quandary of José Mourinho’s listing stewardship as everywhere Woodward looks there are fires that need fighting.

His manager was left discontented at not being granted a choice centre-back in the summer. Paul Pogba, his star midfielder, remains inconsistent and wants to leave for Barcelona. Manchester City and Liverpool – United’s two fiercest rivals – have started the season flying, whereas the 20-times champions endured a deflating defeat at Brighton on Sunday.

Woodward has to decide how best to lead the club forward. As the Glazers’ man-across-the-Atlantic he answers solely to the US-based owners, so commands full control of day-to-day affairs. This means the buck stops with him – a responsibility that holds no fear for Woodward, as illustrated by his comments when discussing the cut-throat world of his previous industry, banking.

Woodward worked at Flemings when it was taken over by JP Morgan – a move that concerned co-workers but not him. “I kept my head down, but it would wind me up when people moaned about losing their jobs there,” he told the fanzine United We Stand in 2014. “Part of the high rewards were the high risk.”

Woodward brokered the deal for JP Morgan that bought the Glazers United in 2005. He has a physics degree from Bristol University and a power base as formidable as Alex Ferguson’s once was. Woodward, though, is a more relaxed presence than the Scot, possessing a sangfroid that means Mourinho in high-maintenance mood will not faze him. Ferguson was the greatest manager in United’s history, not the top executive. Yet when he walked away, the Ferguson era gave way to the Woodward era.

Before, the Glazers were content for United to be the Ferguson show. But when he – and the chief executive, David Gill – left in spring 2013, Woodward took charge and, under the Glazers’ command, began a United reboot that can be characterised as a near-revolution in financial and football terms.

The adding of a women’s team, the restructuring of the academy and scouting system and the imminent move to appoint a first director of football in United’s 140-year history have revamped the sporting side.

Monetarily the assessment was that the club was seriously underperforming. In 2013 United’s count of sponsors stood at no more than 10. Cut to 2018 and under Woodward the number has rocketed. Despite a recent reduction to achieve quality not quantity, the tally stands at about 80: the latest, announced this month, is Chivas as the club’s official spirits partner.

Woodward’s razor-sharp business acumen is used against him by the large constituency of fans who believe the club is a mere cash cow for the Glazers. They point to a title drought that stands at five years and decisions such as baulking at the prices asked for Leicester City’s Harry Maguire and Bayern Munich’s Jérôme Boateng – two central defenders earmarked by Mourinho.

The reasoning here appears sound, though. Woodward and the board looked at two previous signings in the position – Victor Lindelöf and Eric Bailly – and wondered why each was out of favour at times last season and not enjoying the confidence of the man who drove their acquisition. They also factored in Mourinho’s three other centre-backs – Chris Smalling, Phil Jones and Marcos Rojo – and wondered whether Maguire or Boateng was really an improvement.

This is how it works at all clubs, and Mourinho cannot say funds have not been forthcoming: in five windows since replacing Louis van Gaal in summer 2016, the spend stands at £364.3 million on eight buys.

Woodward’s view – and that of the Glazers – may be that after adding 10 outfield players (Zlatan Ibrahimovic came free and Alexis Sánchez was a swap) to the 20 frontline ones inherited, this is a Mourinho squad and it is time for him to focus on what he does have rather than what he does not.

As an astute people-reader, Mourinho will be conscious that Woodward’s mix of affability and ruthlessness (when required) makes him an operator to be reckoned with. The Portuguese faces the greatest challenge of his career – righting the United tanker – and Woodward may wonder whether the manager remains the best man for the job.

Woodward has hardly been amused by Mourinho’s recent antics. Since the mid-July declaration that pre-season would be “very bad”, a gloom has settled on the club that the manager has to lift quickly.

If it is not, then Woodward – and his bosses – are bound to discuss Mourinho’s future. But do not expect any hasty moves. Even if United were to lose to Tottenham Hotspur on Monday and at Burnley in the final match before the international break, the clever money would be on Mourinho being given more time.

Yet the biggest mark against Woodward is not transfer policy or the drive to make United a commercial force globally but that his managerial appointments have so far failed to yield a title.

Ferguson’s successor, David Moyes, lasted 34 league games. Van Gaal was sacked for failing to claim a Champions League berth. Mourinho has the Europa League, League Cup and last year’s second-place finish on his United resumé, but these are not what he was hired to deliver. The club’s share price on Tuesday hit an all-time high but for Woodward a 21st title is the holy grail.

Woodward believes Mourinho can deliver this season but, should the club go into free fall, the former will have no compunction recommending to the Glazers that the latter be removed. – Guardian

1 Cam Newton broke the mould: Can his flame be rekindled at the Patriots?
2 The Game Changers: Vincent O’Brien, a pioneer who took Irish racing to the world
3 Pete Sampras: The forgotten great with the best serve in the business
4 The unsolved mystery of Goran Ivanisevic’s stunning Wimbledon win
5 Tipping Point: DeChambeau’s transformation raises questions, but who will ask them?
Real news has value SUBSCRIBE
Crossword Get access to over 6,000 interactive crosswords