Dundalk, like the champions, also expected to register an emphatic home victory 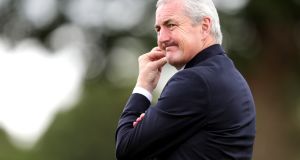 John Caulfield: will be expecting his Cork City side to ease past the challenge of Maynooth University. Photograph: Laszlo Geczo/inpho

As things stand Maynooth University Town’s FAI Cup run has all the makings of trick pub quiz question with wins over Everton and Leeds earning Barry Prenderville’s side a second round clash with holders Cork City.

If they somehow spring a surprise at Turner’s Cross, however, nobody will forget any time soon how they made it to the quarter-finals.

“I don’t want to sound naive,” says their manager, a former youth international who had spells away with Coventry, Oldham and Hibernian as well as at home with St Patrick’s Athletic and Shamrock Rovers.

“We are fully aware of what they are capable of but I don’t think you can go into any game without aiming to win and so that is what we will be trying to do. Any sort of a result would be a great result for us, of course, but there’s no point in going down there if we don’t think that we can do anything in the game.”

John Caulfield is respectful towards a side that will include quite a few current and former students from University and a few who have had a taste of League of Ireland football.

But, having managed UCC a few years back himself, he will have a good idea of what his side is up against and will surely expect a win, ideally a comfortable one that includes a clean sheet, something City have not managed in any of the five games they have played over the past month.

The Intermediate Cup holders have a full squad to choose from, the side chasing a third straight success in the senior competition are without Steven Beattie or Colm Horgan.

Finn Harps might look to have a better shout of causing an upset at Oriel Park but even after a run of eight games unbeaten the First Division side’s press release hints at the near inevitability of defeat, a sense strengthened by recent record against Stephen Kenny’s side: six straight defeats with 20 goals conceded but none scored.

Sam Todd is suspended for the visitors and Adam Duffy is out while Paddy McCourt is amongst the doubts. The hosts are close enough to full fitness and on a strong enough run of their own to go into the game with some confidence.