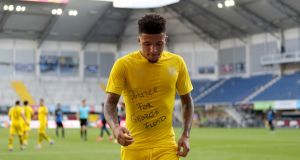 Bundesliga players are free to show their support for protests over the death of George Floyd, the German Football Association (DFB) said on Wednesday.

The DFB said in a statement that no disciplinary action would be taken against Borussia Dortmund’s Achraf Hakini and Jadon Sancho, Weston McKennie of Schalke 04 or Borussia Mönchengladbach’s Marcus Thuram – all of whom signalled their support during matches.

England international Sancho was shown a yellow card after removing his shirt to reveal the message “Justice for George Floyd”, although the booking was for the shirt removal, rather than the slogan.

Soccer’s world governing body Fifa, which forbids players expressing personal views about politics, religion and social issues on the field, broke with its usual protocol and advised “common sense” in dealing with such incidents.

The DFB said it would take no action against symbols of solidarity with the protests in the US and across the world.

“This line will also be taken should further players make demonstrations on racism and the death of Floyd over the course of upcoming matchdays,” the statement said.

Anton Nachreiner, chairman of the DFB’s control body, said: “It goes without saying that the DFB’s control body always has Fifa and DFB regulations in mind. In this specific case, however, these are deliberate actions of anti-racism by the players, who are thus campaigning for the very values which the DFB seeks to uphold.”

Fifa President Gianni Infantino said this week players supporting the protests would deserve “applause and not a punishment”.

The sporting world has united in solidarity behind the anti-racism protests sparked by a video of a police officer in Minneapolis kneeling on the neck of Floyd for nearly nine minutes, causing his death.