All in the Game: Nigeria bite back in war of words with Redknapp

Quotes of the week, a feast of football and a steaming cup of Bisto in Owen Coyle’s house 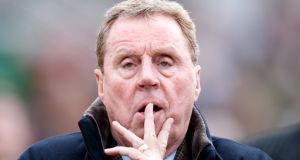 Harry Redknapp was on the receiving end of a scathing reply from the Nigerian FA. Photo: Getty Images

When the folk at talkSPORT asked Harry Redknapp last week about rumours linking him to the Nigeria job, he was just a touch sarcastic about the prospects of upping sticks and moving to the country.

“Yeah, well I spoke to Sandra and she’s always wanted to live in Nigeria. She said it’s amazing that this has come up now, because that was her dream. So we’re looking to sell up, we’re putting the house on the market. I’ve told her, she’d absolutely love it. I’m ready to go!”

He wasn’t much kinder when he put on his serious face. “I actually went there a few years ago with Portsmouth..... I don’t think I’ll be going back.”

The Nigeria Football Federation, though, were a bit rude themselves about ‘Arry when they responded to the rumours, a spokesman telling Goal.com: “The news is all a hoax ..... even if Nigeria ever thought of having a new coach, it would definitely not have been Redknapp. Hiring him would mean returning the Super Eagles to the 1980s.” Ooooh.

“My plan was always just to go for the three years and then get in to a club job... so I thought, get some experience and then cut my teeth in day-to-day running with the energy that I’ve got.” – Phil Neville, waiting by his phone for a call from Real Madrid/Barcelona/Manchester United, admitting the England women’s job was but a stepping stone in to club management.

202: That’s how many Spanish La Liga and English Premier League games, combined, will be played in a 39-day period. From a famine to a feast.

“He gets the opponent thinking, ‘I have time’ - and then meep, meep, meep! The roadrunner gets ahead and steals the ball.” – Thomas Muller on his rather speedy Bayern Munich team-mate Alphonso Davies.

“Virgil van Dijk is very lucky to play in an era where there is no Drogba, Lampard, Shearer, Henry, Rooney, Van Persie, Tevez, Adebayor and Diego Costa in the Premier League. No wonder they think he is the best defender in the league.” – Michael Ballack reckons Virgil has it easy, with, eh, only the likes of Aguero, Kane, Aubameyang, Vardy, Rashford, etc to handle.

“I remember Giggsy later in his career, when we were starting to learn about nutrition, and I asked him, ‘what would you do if you were in bad form?’ He said, ‘I’d take the butter off my toast to get that extra 0.01 per cent’.” – Gary Neville on the sacrifices Ryan made to find his form. Frankly, toast without butter was a sacrifice too far.

Weirdest Behaviour Last Week By A Father of a Professional Footballer

We’ll go with Achim Meyer’s decision to film himself driving a Lamborghini around Gelsenkirchen while rejoicing in the struggles of the city’s Bundesliga club Schalke with whom his son Max used to play and, who Achim claimed, paid for his highly flash car. And then, of course, he posted the video with his commentary:

“It doesn’t get any better, man. Through the forbidden city, Gelsenkirchen. It’s nice with the paid Lambo from the bankruptcy club. Wonderful.”

Achim’s excuse for behaving like a prat? He’d lost a bet. “I’m just a fool, but it was pure satire! Relax!” But you’d reckon the distance between father and son from here on in will be considerably more than two metres.

Owen Coyle did some fine reminiscing about how he got in to management on the Football Daft podcast last week, as told by the Daily Mail, the fella who won a single Republic of Ireland cap back in the day now in charge of Chennaiyin in India, but it was with St Johnstone that he started out in 2005.

The club’s chairman Geoff Brown came to his house to interview him for the job, the chat going exceedingly well, as he told his wife Kerry when she returned home. He’d even managed to make Brown a cup of coffee, he said. “We’ve not got coffee,” she replied, “that’s Bisto gravy, you arsehole.”

Somehow, he still got the job. Geoff Brown: the world’s most forgiving man.