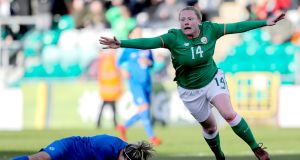 FC Koln were perfectly happy for Amber Barrett to take a few days to mull over their offer of a two-year professional contract, but having had a look around their training ground and facilities when she was invited over by the club in June, the only question she had was “where’s the pen?”

“It was like going into your favourite toy shop and it has everything that you ever wanted,” she says. “I stood there looking at the place thinking, ‘how could I not become a better player when I have all of this’?”

So she signed on the dotted line there and then.

In just over two weeks the 23-year-old will begin her career in the top flight of German football when Koln open their Bundesliga campaign away to SV Meppen, and with that Barrett will fulfil a long-held ambition to play professionally in one of Europe’s major leagues.

She smiles at the notion that the sports-mad little girl, from a family steeped in GAA, could ever have imagined when she was growing up in Milford, Co Donegal, that she would one day “be playing against the likes of Bayern Munich and Wolfsburg in the Bundesliga”. She says opportunities of that kind were just not on her horizon. “Never did I think this could have happened.”

But having completed her masters in education at Dublin City University, Barrett was on the look-out for just such an opportunity. And it came her way when Willi Breuer, the manager of newly-promoted FC Koln, asked his old friend Colin Bell, with whom he had worked with in Germany, to recommend a striker.

Having brought Barrett into the senior Irish squad and given her her debut in September 2017, Bell knew her qualities better than most and flew with her to Germany to meet Breuer and see the club’s set-up. It was all she had ever wanted.

Yet by the end of the month Bell had left his position as Republic of Ireland manager, the news coming as a particular blow to Barrett for whom Bell had played a major role in her development.

“It came as a huge shock for all of us,” she says. “There’s been a lot of talk about things going on in the FAI, it’s not exactly brimming with confidence at the minute. But at the same time the development of women’s football in Ireland could really have pushed on if we’d held on to Colin.

“I owe him a lot. He got me my enthusiasm back when it was waning a little. I wanted to do better because of him – and he helped get me the opportunity with Koln.

“But while it’s very disappointing to have lost him, especially only a few weeks before the start of the European qualifiers, we can’t just sit and wallow. I think the squad improved hugely under him, he laid down a marker in terms of the amount of times we trained and so on, so whoever comes in will have to build on that. He set a standard, and it’s one we want maintained. And I hope that will be the case.”

Whatever happens, Barrett, currently in the United States with the Irish squad preparing for Saturday’s game against the World Cup winners, will start both her club and international seasons under new management.

“And it’s up to me to impress both. I can’t just be saying ‘oh, I used to play really well under Colin, I used to do well with Peamount’, that’s all done now. I have to focus on the future. Much as it’s good to have someone you’re used to, sometimes it can be good to work for someone new as well. It’s someone new to impress.”

And for Barrett the ultimate goal is to seal a place in the Irish team. Yet to do that she believed a move abroad was essential, much as it pained her to say goodbye to Peamount United, the Dublin club for whom she had been a prolific scorer since signing up after starting her degree in Maynooth University.

“Leaving them was really, really hard,” she says. “There were a few tears. I’ll never forget what they’ve done for me. I think because of the GAA in me I had a loyalty to and love for Peamount, so this is like leaving your GAA club to go off and play for someone else – which is very difficult.

“When I joined them my mum would always ask, ‘are they looking after you?’, and I was always like, ‘you’ve no idea how much’. They’ve done so much for me in terms of my own development, both football-wise and personally.

“If you look at their history and the number of players they’ve produced who went on to play professionally – and Katie Taylor going on to become the best women’s boxer in the world, and probably our greatest sportsperson – I think there must be something in the water up there.

“It’s a tremendous club, no problem is too big, there’s no bullshitting about them, and they’ve established an environment where players are happy and want to develop. When you have that the world is your oyster.”

But she was ready to move on and see how good she can be given the chance to play her sport full-time. Until now life had been all about trying to keep several plates spinning, from back in the days when she was combining her athletics – the 100m, 200m and long jump her specialities – with playing Gaelic football for Donegal. And then, having chosen to focus on the football, making a decision later to devote herself to soccer.

“It was when Koln sent me the team’s training schedule that I really realised I was going to be in a whole new world. I’ll be doing the equivalent of three and a half weeks’ Peamount training in one week, which is just so exciting. You’ll have a ball at your feet every day, training at a high intensity, you have to get better with that.

“Me and Leanne Kiernan, for example, want to play centre forward for Ireland – Leanne has been training six times a week with West Ham since she moved there, I was training twice a week with Peamount.

“She was working harder than me, developing more as a player. I just wanted the chance to match her. If somebody’s studying history six days a week compared to twice, well then that person is going to learn more.

“And now I’ll be coming up against some of the best defenders in the world, trying to outsmart them. That was one of the most thrilling things watching the World Cup this summer, knowing that I’ll be playing against some of the players who represented Germany and other countries. Getting the chance to play at that level is what dreams are made of.”

She’s up for the challenge then. Both on and off the pitch.

“The biggest challenge might be learning the language – I’m hard enough to understand in English, never mind in German, but we’ll see how it goes. Claire O’Riordan [her international team-mate who plays with MSV Duisburg] is only up the road, so I’m sure she’ll help me.

“Although a Donegal woman learning German from a Limerick woman……”

Like a kid in a toy shop, though, she’s buzzing. Let the adventure begin.

1 Game Changers: Living beyond fear puts Alex Honnold above all others
2 CVC cuts Six Nations offer by half to €165m as talks continue on new deal
3 Could lack of sex force players to break the NBA’s bubble?
4 Jack Charlton era made GAA sit up and realise its greatest strength
5 Lions confirm 2021 schedule for South Africa tour
Real news has value SUBSCRIBE
Crossword Get access to over 6,000 interactive crosswords