Full English serves up a feast of football, once you were watching 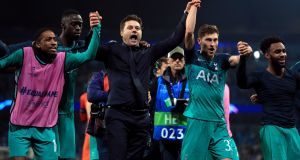 And it seemed like such a good idea at the time: watch the first 10-ish minutes of Porto v Liverpool just to see if there was any life in the hosts, and then flick over for the Full English in Manchester which, as some of us confidently predicted, would be a tight affair, low on entertainment, high in edgy tension, with the defences well and truly on top, Ederson and Hugo Lloris twiddling their thumbs.

Ten-ish minutes up, nothing stirring. Flick.

“THIS IS ONE OF THE MOST SENSATIONAL OPENING 10 MINUTES OF FOOTBALL WE’VE EVER SEEN!”

If he had even a hint of humanity about him, Virgin Media’s Conor McNamara could have broken it more gently.

Just the four goals, then, in those moments we were monitoring happenings in Portugal, which amounted to not a jot, prompting a strongly worded letter to Uefa about them not being greedy enough to stagger their Champions League quarter-final legs.

A quick flick back to Portugal and Raheem Sterling scored again in Manchester, back to Manchester and Sadio Mane scored in Portugal. By now you’d have had a notion the footballing gods were taking the mickey.

The only one who wasn’t breathless by then, really, was Jermaine Jenas, Darren Fletcher’s sidekick in the BT Sport 2 commentary box, Jermaine having the ability to make watching five Champions League goals being scored in a record 21 minutes akin to observing a fly ascending a wall. In contrast, Robbie Savage over on BT Sport 3 was leaving Ian Darke’s ear-drums perforated if Liverpool even won a thrown-in.

And some people are even unkind enough to allege that Jermaine, who played for Spurs, has a pro-Spurs bias, his habit of crediting Dele Alli with assists when he’s actually just lost possession in the build-up to a goal, and calling every Spursy player by their first name, while opting to address the City lads by their surnames, adding a little bit of fuel to the alleging fire.

At least BT Sport 3 opted for impartiality when they chose Robbie Fowler, Steve McManaman and Michael Owen for their panel for the Liverpool game, the Leeds, Real Madrid and Manchester United legends proving to be entirely neutral.

“Well, a bit of a slow start, but it livened up after three minutes, 51 seconds,” said Gary Lineker, rubbing it in. Rio Ferdinand, meanwhile, told us he was left in the sweats by the activity in Manchester, while Glenn Hoddle retracted his forecast that if Spurs scored once that’d be plenty to put them through to the semi-finals.

Sergio Agüero missiles home a Kevin de Bruyne pass of such deliciousness it merely strengthened the theory that the Belgian lad must have been mothered and fathered by the gods. 4-2.

Then Fernando Llorente pulls one back. 4-3.

Hold it. VAR. Hip or hand? BT’s resident ref Peter Walton studied the replay and concluded that the ball came off Llorente’s knee, when it came off his, eh, hip.

Darren asked him if he’d like to re-check it. He did. “It came off his knee.”

Injury time. Sterling! Hat-trick! City through to the semis!

And the stadium fell in to the eeriest of silence.

VAR? The greatest thing ever. “It has won the day,” said Glenn, awarding it the Man of the Match gong.

“Are you okay,” Gary asked him, Glenn just recently back in action after a heart attack. “Yeah, I’ve calmed down, I’ve taken the pill,” he said, Spurs fans the globe over possibly having just had to do the very same.

“In your life, have you ever seen a game of football like that,” Gary asked us, and we were struggling a little bit to come up with too many rivals. We’ll think of them yet, but for the night that was in it, na.

Stupendous. Even if some of us missed the first 10-ish minutes thinking all the drama would be in Portugal. Morto.

1 Nicholas Quinn: ‘Swimming became how I dealt with grief’
2 Reality Bites – Tales from the new normal: Caitríona Cormican
3 A beautiful, happy accident - Moneyball is the best sports movie ever
4 James McClean still failing to learn his own online history lesson
5 Ian O’Riordan: The aloneness of the long-distance rider
Real news has value SUBSCRIBE