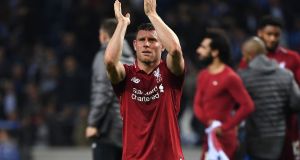 James Milner has said Liverpool’s European experience and style of play give them every confidence of beating Barcelona in the Champions League semi-finals.

Liverpool will face Ernesto Valverde’s team on May 1st and May 7th having confirmed their place in the last four for the second consecutive year against Porto on Wednesday.

Barcelona, and Lionel Messi in particular, were in commanding form in their victory over Manchester United 24 hours earlier, and are also in pursuit of a league and Champions League double.

Liverpool are on a different level to United, with 21 points separating them in the Premier League. They will also play the second leg at Anfield. Milner believes the team’s knowhow in Europe, again evident in their 4-1 win at the Estádio do Dragão in Porto, ensures the Spanish champions-elect will hold no fear for the Premier League leaders.

“We can beat Barça, but we know it will be very tough,” the midfielder said. “I’ve been there a couple of times in the knockout stages with [Manchester] City and not got the right result, so hopefully it is third time lucky for me.

“They are a strong team and it is a tough place to go, but I don’t think they will have played too many teams with the style we play either. It will be difficult. They are a team full of great individual talent and a great side too.

“The Camp Nou is a fantastic stadium, and a fantastic place to play with a great atmosphere. It will be very tough, and we will have to be at our best but tough for them too.

“Over the last couple of seasons, with the teams we have beaten in the Champions League, we should go there with confidence no matter how tough it is going to be. I’m sure you can see in this year’s run and in games when things haven’t been going well that we have got the experience. We have been there before and know how to get results.”

Liverpool’s thoughts turned to Sunday’s visit to relegation-threatened Cardiff after the 6-1 aggregate defeat of Porto, not the impending reunions with Luis Suárez and Philippe Coutinho.

While Liverpool secured an ultimately comfortable Champions League victory their title rivals City were suffering an agonising late exit against Tottenham. Milner does not believe the contrasting results will necessarily hand Liverpool an advantage this weekend.

“You look at our scoreline and you will think it was an easy game but it wasn’t, it was very tough. We had all hands on deck and we were defending. A bit of energy has come out of the legs, and that is why I have said we have to recover.

“In terms of the other game, only City know how they are going to react. It is disappointing for them, and they will push hard for the remaining games. We will keep one eye on it but all we can do is influence our games.

“They are Premier League champions for a reason, and I am sure they will react like champions. They will go again. But Spurs will have their backs up and want to go again after getting such a great result.”