Neil Warnock using past life hardship to fuel his fire 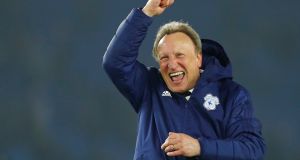 Neil Warnock was as we imagine him: resentful and angry, face contorted and about to let everyone know about it. There was tension in the small room, some uncertainty as to where this was leading. A confrontation was looming and then it arrived with a bang. From his lips.

As Warnock was to say: “It all got a bit awkward.”

The solution was his removal: “They shuffled me out.”

And with Warnock gone, the others resumed what was expected of them on that particular day.

This was no touchline fracas. This was not Warnock venting at some hapless referee or an unfortunate fourth official. This was not a row with a rival manager. It was, in fact, not even at a football match.

No, this was the scene in the front room of the house in Sheffield in which Warnock grew up. It was the day of his mother’s funeral. He was 13.

Warnock was furious that those present to salute his mother had not come when she was bed-ridden and needed them. He let them know. Even at 13 he was a one-man awkward squad.

The first line of the first chapter of Warnock’s 2007 autobiography is: “My childhood was not easy.”

His mother had multiple sclerosis, caused perhaps, he was told, by a fall she had while she was pregnant with him. “I was brought up thinking there was a good chance I helped my mum contract the disease that killed her.”

While his all-hours steel-worker father was out earning, the local bread man squeezed the child’s knee. There was another, similar encounter with a father’s friend. Cash was scarce going on invisible. No, Warnock’s childhood does not sound easy.

“It made me think how horrible people were,” he said of that funeral in 1962.

If reading into his childhood is too much cod-psychology for some, it would nevertheless be unsurprising if Warnock’s world-view was partially formed then, because what is easy – easy to see and hear – is that this uneasy man has been letting people know about his frustrations ever since.

Warnock was, he says, not a great winger, but he made it to Chesterfield as a teenager and was still playing professionally, at Crewe, 12 years later. He chiselled out a career and developed a stoop, he thinks, in shying away from the terrace abuse at Chesterfield.

He became a part-time manager, sold insurance, worked in a grocer’s, set up practice as a qualified chiropodist. Warnock is self-made and in the manner of self-made men – especially if they come from Yorkshire – knows what he likes and bloody well likes what he knows. He’s a keen Brexiteer, would fit into Hillary Clinton’s “basket of deplorables”. They sing about greasy butties in Sheffield United’s anthem and Warnock, a Unitedite by birth, has a chip supper on each shoulder.

It has fuelled him.

He’ll be a millionaire by now, and along the way has gained respect – eight promotions do that.

Yet there are doubts. He refers to himself as “Marmite” as in you either love him or hate him. It implies a 50-50 split, whereas it feels rather more dislike him than the opposite. Gary Lineker called him “Colin” this season – “Colin Wanker” being his nickname, an anagram of Neil Warnock.

There are plenty of stories about Colin. Some are colourful-funny – cancelling training because a lone magpie had flown onto the pitch – and some aren’t. Why have two sons of the agent Willie McKay been in Cardiff’s under-23 squad this season?

But even critics can admit Warnock has a talent for turning an often average squad into some kind of force-field. As a player at Hartlepool he had a pre-season session on the moors at night – without a tent. Warnock recalled how it engendered team spirit. At Huddersfield, David Wagner did something similar. No one calls Wagner “Colin”.

After Brentford played Leeds at Elland Road in October, Brentford manager Dean Smith, now at Aston Villa, compared Marcelo Bielsea’s tactics when Leeds were out of possession to “Cardiff City last season”. It was quite a compliment.

That some will have chosen to not hear it reflects on Warnock. Whether deep down he is bothered is another question. He seems thin-skinned but the opposite is more accurate.

Here he is at 70 doing it again, cajoling and chiselling, telling people what he thinks, charged for slagging off officials over their judgements during the Cardiff-Chelsea game three weeks ago.

With Cardiff leading 1-0 against their alleged superiors, Chelsea were awarded a goal that was clearly offside. Warnock railed, justifiably, against the decision-makers. Chelsea went on to win 2-1. It could easily have finished 1-0 to Cardiff. Had it done so, Warnock’s team would be out of the relegation zone and in the process of staging one of the great, defiant seasons from a so-called Premier League minnow.

They may do it yet. After having a clear penalty denied them last Saturday at Burnley, Cardiff went to Brighton on Tuesday in a win-or-bust situation for them and won 2-0. If Cardiff stay up on their budget, given the murky tragedy of Emiliano Sala, the injury to Sol Bamba, Warnock will rival Jurgen Klopp and Mauricio Pochettino as Premier League manager of the season.

Tomorrow in Cardiff it is Klopp’s Liverpool who arrive chasing a league title. It will be a mark of Liverpool’s quality if they make this an easy Sunday afternoon. It is foreseeable the Reds will lay siege, but they will be up against Warnock’s siege mentality.

While the Bluebirds have received some hammerings at home, Tuesday’s impressive result at Brighton gives them fresh momentum. Cardiff’s two games afterwards are Fulham away and Crystal Palace at home. Those fixtures give Cardiff optimism.

After Brighton, once again Warnock let people know what he thought: “There were so many pundits this morning said it would be our last game in the Premier League. We’re alive and kicking.

“We’re quite capable of picking points up off any of the teams we’ve got to play. You might think I’m in cuckoo land.”

Cardiff’s position looks in stark contrast with Brighton, who have lost their last four and who are yet to play Tottenham, Arsenal and Manchester City. Those fixtures give Brighton cause for pessimism.

And a contrast is also with Chris Hughton. Admired, understandably, for his human qualities as well as his work as a coach, Hughton has earned the kind of public affection Warnock will never receive.

Hughton called for “fight” from his players after Tuesday. It was the kind of remark Warnock is associated with. Those who know and like him say Warnock is more than his abrasive persona, and there are layers to, and explanations for, each of these managers thrust in front of us. Maybe he is more, but it’s there and it is effective. He’ll let you know about it.