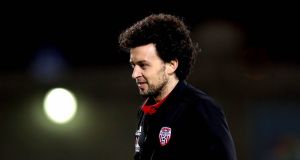 Derry City’s Barry McNamee: “We now want to maintain our form and give Rovers a good game.”

Midfielder McNamee and Devine’s respective second spells back at the Brandywell this year has helped bring a renewed optimism to the club.

Derry slumped to an eighth place finish in the Premier Division table last season, losing their final game of the campaign 5-0 at St Patrick’s Athletic.

Last Monday, in making their second trip to the capital in four days, Derry produced arguably their best display of the season to date to beat St Patrick’s 3-1 back at Richmond Park.

It marked a fourth successive league win to edge Derry up to second place in the table, neatly setting up Friday night’s visit north of league leaders Shamrock Rovers.

“In years gone by, when I was here before, some teams might have seen Derry as a soft touch,” said 27-year-old McNamee, who spent last season at Cork City. “Deccie has come in and changed that.

“First things first is your attitude and that’s been spot on since the first day of the season.

“That has carried through into all the games. We’re in a good bit of form now and hopefully that continues.

“(Rovers) have set the standard so far this year. We now want to maintain our form and give Rovers a good game.”

Midfielder Jamie McDonagh is suspended while the game comes a little too early for injured winger Aidy Delap as Derry expect a full house.

“We were beaten at Tallaght earlier in the season but there was very little in it,” said Devine. “This is an opportunity to show that the team is improving and we can compete with the top sides in the country.”

“We did well up there last season,” said Rovers’ manager Stephen Bradley. “They’ll sell out the Brandywell. The pitch suits us and I don’t see it being any different (tonight). It’s a nice, big pitch that’s good for the way we play.

“This will be one of our toughest games of the season, but the players at the moment feel like they can play anyone, home or away and go and get a result.”