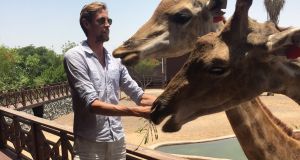 Peter Crouch with the Tweet of the Year: "Summer for me is about time with family." Photograph: Twitter

Bronze: “Burnley are still in it for me.” At a point in the game when they were leading Chelsea 3-1, Dion Dublin reckoned Burnley had a chance of getting something out of it.

Silver: “The pitch is a bit bobbly, which is a great leveller.” Chris Waddle, muddling his rough with the smooth.

Gold: “If you take away the top seven, they’re top.” Paul Merson spotting that if it wasn’t for Chelsea, Manchester City, Spurs, Arsenal, Liverpool, Manchester United and Everton, eighth-placed West Brom would have been champions-elect.

“Summer for me is about time with family .” *Giraffe pic - Peter Crouch’s holiday snap. The man’s a legend.

Bronze: “We can’t say that Maradona was a great header. He didn’t score goals with headers. And we cannot say Maradona shot very well with both feet, because he didn’t shoot with his right, only mainly with his left. For me he was a great player, it’s just that you can’t compare Maradona with Pele.” Eh, Pele.

Silver: “I’m the best player in history, in the good moments and the bad . . . I’ve never seen anyone better than me. I have always thought that. No footballer can do the things I can . . . there’s no one more complete than me.” Cristiano, eating himself.

Gold: “RL 9: Path to Glory.” The title of a thesis for a degree in PE. Whose thesis? Robert Lewandowski’s.

Bronze: “Yes, Mbappe could be like me, one of the best in the world. Or maybe he could have a career like Domenech: an average Ligue 1 player, under-21 coach for 15 years without winning anything, unemployed since 2010, and now writing a column for the newspaper that ended his little coaching career.” Let’s just say Nicolas Anelka has yet to heal his rift with Raymond Domenech.

Silver: “That’s roughly what I paid Anthony Stokes at CPFC for impersonating a footballer.” Former Crystal Palace owner Simon Jordan on hearing Stokes (inset) had been fined €230,000 for head-butting an Elvis impersonator.

Gold: “I think he is the only person in the world who knows the number of pubic hairs that Zidane has on his family jewels.” Patrice Evra responding to criticism of his form from Christophe Dugarry by suggesting Dugarry wouldn’t have won half his French caps if he wasn’t such a, well, intimate pal of Zinedine.

Silver: “I actually signed a contract with Metallist Kharkiv in Ukraine after leaving Hamburg but the civil war started. Maybe I would have been better going in to the civil war than to Sunderland.” Now Celtic head of recruitment Lee Congerton on a cataclysmic career choice.

Quote of the year

“When I saw him play it made me think I had to change profession – let’s not confuse Nutella with shit” Gennaro Gattuso doffing his cap to former team-mate Andrea Pirlo on his retirement.

Number of the year

298 - That’s how many days Claudio Ranieri held on to his Leicester job after winning the Premier League. “I love you ... and I hope you think about [the title] and smile every day the way I always will,” he said, leaving us in floods.

Bronze: “Sead Kolasinac is built like one of those north London brick toilets that withstood bombing raids during the second World War.” Garth Crooks with mother of all salutes to sturdily manufactured Arsenal defender.

Gold: “It’s like you’re being put in a cage with a gorilla and you have to steal his food. It is impossible to win a one-on-one with Chiellini.” Spain’s Alvaro Morata on the mighty defensive skills of his former Juventus buddy, Giorgio.

Bronze: “When I came in we were ninth and now, ‘ooofff.’ We are really on a good way.” Jurgen Klopp after a draw with Burnley rocketed Liverpool in to, well, eighth.

Silver: “When I pass away, I don’t want any silence or clapping – just a minute’s booing at clubs that hated me.” Cardiff City gaffer Neil Warnock humbly acknowledging that he’s not widely loved.

Bronze: “Since I was 15 I have had no Christmas or New Year to celebrate with my family who I see rarely or never. I miss the special moments. It begins to weigh on you. For family parties, they no longer invite me because they know I cannot come anyway.” Spurs’ Toby Alderweireld, loving the life of a footballing export.

Silver: “I still don’t know how you can eat beans in the morning.” Nine years after moving to England, Morgan Schneiderlin is still struggling to comprehend the country’s brekkie abomination.

Gold: “I’ve been here for a month and a half, but I am yet to see the sun.” Andrea Ranocchia, relishing his loan spell at Hull City from Inter Milan.