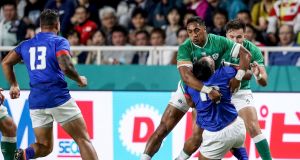 Are you a Sky Sports customer? Well, if you are you could be set to continue saving on bills for quite a while after the broadcaster told this newspaper that, for those who have paused their subscriptions, bills will likely not kick in again until Premier League football returns. When that will be is anyone’s guess but it is certainly within the interests of all to get back underway as soon as possible given that Sky and BT Sport could be set to lose over €1 billion within the next few months if the blackout continues. The lack of live sport is a huge issue for broadcaster’s everywhere at the moment and none are immune, including the like of RTÉ and BBC who have seen large parts of their summer schedules wiped with the postponement of Euro 2020 and the Olympics. All of that and more is explored in this week’s Pay for Play column. Also in this week’s consumer pages we’ve picked out five new sports releases to read over the coming weeks as these strange lockdown times continues. All are available on Kindle or as e-books so you don’t even have to leave the house.

Moving on to rugby and Gerry Thornley writes in his column this morning that new rules changes could transform rugby utterly before the next Rugby World Cup. Trials have shown that lowering the legal tackle height from armpit to waist helps to reduce injuries, especially concussion, and with the tackle responsible for 76 per cent of concussions, that is an area World Rugby feel they need to improve on. However, with the issues caused at last year’s tournament just by the tackle being reduced to shoulder height, it’ll be interesting to see how players adapt even further. Moving on and the increasingly unlikely summer Tests were thrown into further doubt yesterday as Australia said they may pull out of the two matches scheduled against Ireland. It’s already looking next to impossible for any of the summer tours to go ahead as planned and the likely cancellation will come as another blow to Ireland’s revenue stream. In similar news, Gavin Cummiskey reports that USA Rugby have filed for bankruptcy amid the current crisis. World Rugby are to supply a “financial support package” to allow the organisation navigate a course through the expensive legal process and to help create a significantly trimmed down governance structure.