Five newly-released sports books to read over the coming weeks

From the Masters to ultra-running, football’s most extreme fans and more in between 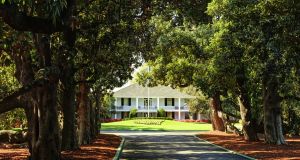 Mark Cannizzaro gives readers a behind the scenes look at one of the most famous sporting event’s in the world. Photograph: Getty Images

Seven Days in Augusta: Behind the Scenes at the Masters

Author: Mark Cannizzaro.
Release date: March 10th.
The first Major of the year may not be gracing our screens this year but this new book by Mark Cannizzaro offers a glimpse behind the curtain of one of sport’s most revered and secretive tournaments. New York Post columnist Cannizzaro has been covering the Masters for 25 years and gives readers the sort of details you could only see if you had the sort of access the vast majority of people don’t have. If you enjoy this book another recommendation would be the superb The Masters: Golf, Money and Power in Augusta by Curt Sampson which explores some of the darker aspects of Augusta National.

The Rise of the Ultra Runners: A Journey to the Edge of Human Endurance

Author: Adharanand Finn.
Release date: April 2nd.
One of the fastest growing sports in the world involves running through deserts, across mountains, in the Arctic Circle and on some of the most challenging terrain in the world over huge distances. So, after reading that you’re inevitably asking the question of: why? Why is a simple 26-mile marathon now nowhere near tough enough, why do people set out to do, for example, the 105-mile Ultra-Trail du Mont-Blanc instead? Well, in this book, Adharanand Finn sets out to discover why and attempts to see if he can become an ultra runner himself.

1312: Among the Ultras - A journey with the world’s most extreme fans

Release date: March 2nd.
Author: James Montague.
For anyone who read the excellent Ultras by Tobias Jones, which came out last year, then this book is a must. While Jones’s account was about the ultras movement in Italy, this book sees Montague travel to 25 different countries to get among the hardcore element of fans who, in most cases, are far more than that. From the likes of Boca Junior’s Doce group who allegedly pull in close to $3 million a month in ticket touting, merchandise and some other nefarious acts to the organised mixed martial arts fights between groups in eastern Europe and the machete-wielding ultras of Indonesia. The author mixes history with first-hand accounts of being among the groups which makes for a great read for anyone interested in fan culture.

The Hot Hand: The Mystery of Science and of Streaks

Release date: March 10th.
Author: Ben Cohen.
Listeners to the Second Captains podcasts may have heard Ben Cohen interviewed during the week about his new book which looks at how people in various fields from sport to business and more get on streaks of confidence where the world is seemingly at their feet. Sport is only a small part of this book with Steph Curry the main focus as he explains how an arc of black paint turned him into one of the greatest basketball points scorers of all times. Precision sports like basketball, golf, snooker and others regularly refer to “streaks” and in this book Cohen looks at just how true the phenomenon is.

The Second Life of Tiger Woods

Release date: April 2nd.
Author: Michael Bamberger.
There are few, if any, sportspeople in the history of sport who bring about such intrigue as Tiger Woods. Between winning the Masters in 1997 to miraculously donning that green jacket again last year, the life of Tiger Woods has had absolutely everything. The 2018 release of Tiger Woods by Jeff Benedict and Armen Keteyian was a huge hit as it delved into previously unheard details about Woods and this new book, which has the advantage of taking in his Masters win last year, could cause just as much of a stir as renowned golf journalist Bamberger, who has covered Woods since he was an amateur in the mid-90s, makes full use of his wealth of contacts around one of the most famous sportspeople ever to walk the planet.