On his way to a three-shot victory, Lefty played one of the most amazing shots in Major history 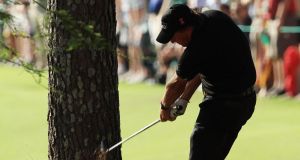 Phil Mickelson plays a six-iron from the pine straw on the 13th hole during the final round of the 2010 Masters at Augusta. Photograph: David Cannon/Getty Images

He missed the putt, which gets forgotten. But we’ll come to that. It very nearly wasn’t even the most spectacular shot on that hole that day, that hour or even that 10 minutes. But we’ll come to that too. For now, I’ll take Phil Mickelson’s six-iron from the pine straw to the 13th at Augusta in 2010 as my favourite sporting moment for the extremely base and self-indulgent reason that I was standing about 20 yards away when he hit it.

If I’m ever asked for a suggestion of one sporting event to go to, I always say the Masters at Augusta. Now, I do of course realise that this is like recommending dinner at Noma or a night out with Darragh Ó Sé – some things in life are exclusive and if it was that easy sure we’d all be at it. But nonetheless, I always say the same thing. If you have a way of getting a ticket for the Masters, do so. It should be the ambition of every sports fan to make it there once in a lifetime.

It is, by the way, the only golf recommendation I would make. The vast, vast majority of the time, a golf course is the worst place to watch a golf tournament. It’s a big schlep, you’re never tall enough and the best bits are always happening somewhere else. Worst of all, you’re surrounded by Golf People at every turn. Television cures each of these problems in one go.

These problems are, if anything, amplified at Augusta. It’s a bigger schlep than you can imagine – there are vast meadows in the centre of the course where you could fit another three or four holes if the need arose. As for never being tall enough, when I tried to follow Tiger Woods one of the days, I found myself stuck trying to peak around the gargantuan frame of a guy I later found out to be former NBA star Alonzo Mourning.

And because you’re not allowed your phone out on the course, you’re always behind on the state of play. You don’t know who’s up or who’s down, who has bogeyed or birdied, until those 1950s scoreboards are manually updated. You can be sitting beside the 16th green and be the last person on earth to know who went in the water on 15.

Still, you should definitely go to the Masters. Television sells it short, if anything. Walk down the side of the downhill 11th and it seems ridiculous that anyone ever makes par. Stand at the back of the 12th tee and it looks like the world’s sexiest pitch-and-putt hole. Plant yourself next to the trees on the corner of the dogleg 13th for half an hour and you’ll spend it oohing and aahing at the boomerang tee-shots the players try to sling from right to left.

That was the place to be on Sunday afternoon, a decade ago next week. For an hour or so, it was one of those knotted, classic Masters Sundays. Mickelson had overtaken Lee Westwood at the top of the leaderboard and was coming off a birdie on the 12th that had shaken the needles from the pines around us.

Away off in the distance, there were roars going up every few minutes to greet Anthony Kim, who played the 13th to the 16th in five under par. And down in front of us, KJ Choi and Tiger Woods were both trying to make their move, with varying degrees of success.

Ah yes. Tiger. This was his first tournament since the, eh, unpleasantness. Early in the week, apparently spooked by the idea that the tabloids would smuggle in one of his long line of paramours to jump from the galleries and cause an embarrassment, a security guard approached a woman in the crowd and asked, “Excuse me Ma’am – are you a stripper?” She wasn’t, as it happened. “I’m not sure how I should feel about that,” she said afterwards. Hard to know, right enough.

There was a guy standing right outside the players’ entrance all week wearing a sandwich board advertising a local jeweller. “Pulled A Tiger?” it roared, “Let Us Smooth It Over For You!” On Thursday, as Woods shot his then-best Masters opening round of 68, a small plane flew overhead carrying a banner behind it that said: “Hey Tiger! Sex Addict? Yeah right! Me Too!”

Yet somehow, in the middle of all this, Woods found a way to get to Sunday afternoon with the leaders in his sights. He was in the second-last group, just ahead of Mickelson and Westwood, four behind as he stood on the 13th tee. After clanking a bad drive off the trees on the left-hand side, he had to lay up to about 75 yards short of the green, needing a stone-cold miracle to stay in the tournament.

Nobody remembers it now but Woods oh-so nearly pulled it off. With Mickelson in the trees behind him, he swished a wedge eight feet past the hole and spun it back, only just lipping out. From where we stood back up at the trees, it looked for all the world like it was nailed on for the bottom of the cup. An eagle there and anything was possible.

As it was, the place was ablaze as Mickelson came loping up from the tee for to find his ball. Both he and Westwood were deep in the pines and when Westwood could only scoot a chip up the fairway for relief, everyone presumed Mickelson was going to do the same. If anything, it looked like he had even less room to work with than Westwood had.

But the longer Mickelson and his then caddie Bones Mackay stood talking, the more obvious it became that he was going to go for it. At one stage, when they looked to have decided on it, you could see Mackay say something to one of the of TV cameramen and then go back to Mickelson.

The word from the cameraman was Choi had bogeyed up ahead and so now Mickelson was in sole possession of the lead. “I had to tell him that in case it changed his mind any,” Mackay would say years later. “He said, ‘If I’m going to win today, I have to hit a great shot under a lot of pressure. I’m going to do it right now.’ That is the ultimate, ‘Get the F out of the way’ to a caddie.”

So he hit it. A six-iron, 206 yards, downhill, over water, out of pine straw, through a gap between two trees that Mackay maintains to this day was no wider than a sleeve of 12 golf balls. Here’s how tight a squeeze it was – he hit it to the left of the right-hand tree but had to move to his right immediately to see where it was going. While the ball was in the air, a guy near me laughed and went, “What an idiot.”

And then, bedlam. The ball landed softly just short of the hole and rolled four feet past. The crowd convulsed in the way only a golf crowd can. With the occasional exceptions – see Portrush last summer – golf crowds generally don’t care who wins. Not in the way partisan crowds in other sports do. You have a rooting interest but that’s not the same thing. It needs something out of the ordinary in golf to get the sort of roar that matches, say, a good hard sliding tackle at a soccer game.

But there, on that 13th hole 10 years ago, the place went doolally. Doesn’t matter what sport you’re into, when you’re there and you see something ridiculous happen like that, you have no choice. It’s a kind of a laughing, eye-popping, guttural roar that you let go. It was literally awesome. We were in awe.

And then he missed the putt. Borrowed too much on the high side, hit it too hard, left himself a longer one coming back.

Rugby union looking at success of rugby league as a summer sport 10:21
Clubs play practice matches ahead of Premier League return 09:40
Conor McGregor announces his latest UFC retirement on Twitter 09:25
‘The same, but different’ - Irish racing ready for resumption 09:00
‘Unbridled passion’ - Turlough O’Brien steps down as Carlow manager 18:38
Here is your handy guide to sport on television this week