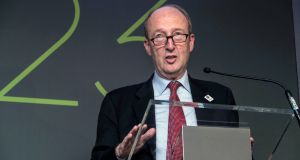 Minister for Transport Shane Ross has voiced opposition to a plan announced earlier this week to cut the funding of sporting organisations if they fail to meet gender targets.

It had been proposed to enforce financially penalties if bodies did not have 30 per cent women on their boards.

Mr Ross met with over 50 organisations Friday and said he did “not favour punitive measures , especially as a weapon to be used against smaller non-governmental bodies”.

The initative was proposed by the Minister of State at the Department of Transport Patrick O’Donovan.

Some sporting organisations had expressed concern they were not consulted before the announcement was made.

Mr Ross said all of the bodies had expressed a desire to ensure more women participate in sport. However, he said he agreed finanical penalties were not the best way to achieve that.

“There was a general consensus at the meeting that punitive measures would not assist us in achieving this goal,” Mr Ross said.

The Minister said he would establish a new leadership group to consider how to encourage more women into leadership roles before a final decision was made on how to proceed.

It is understood Mr Ross and some of the organisations were unaware of the proposals until they were announced by the Minister of State earlier this week.

The Irish Times has learned Mr Ross was particularly angered he was not consulted.

Mr O’Donovan detailed the measures on Monday and said they would be introduced in the new year.

Under the plan, funding for sporting bodies would have been reduced unless at least 30 per cent of their board positions are filled by women.

An analysis by The Irish Times earlier this year showed that of the top 20 sports organisations in terms of 2015 State-funding, seven of them had a female representation of 10 per cent or less.

These included the three most popular and heavily-funded sporting bodies in the country.

Between the 50 places filled by the executive committees/boards of the FAI, IRFU and the GAA there was just a single female representative.

The Minister of State said organisations would have until 2019 to comply, with smaller bodies getting an extra year’s grace.

1 Nicola Sturgeon ‘furious’ as players’ pub trip sees Aberdeen game postponed
2 Brooks Koepka out to win Majors, not make friends
3 Sligo meeting abandoned after four races due to safety concerns
4 The game they loved so well: How cricket united Hume, McGuinness and McCann
5 Bryson DeChambeau’s driver snaps on seventh tee at US PGA
Real news has value SUBSCRIBE
Here is your handy guide to sport on television this week