Shona Heaslip: Irish dancer with a spring in her step

Disillusioned with dancing in feiseanna, she started running, and has never looked back 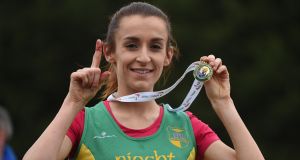 The important thing is to run with the legs, not on them, engaging the core while subconsciously shifting all weight to the upper body, so that, as if skipping to reels of rhyme, one dances barefoot-like over the surface.

That’s according to the golden rulebook of proper running style, and may also help explain both the how and the why Shona Heaslip has made such a swift and perfectly seamless transition from champion Irish dancer to Irish cross-country champion. The resemblances may be closer than she herself realises.

Indeed one of the amazing things about Heaslip’s victory in last month’s Irish cross-country was that it came just two years since she replaced her dancing shoes with running spikes. Growing up in Tralee, Co Kerry, she’d been immersed in Irish dancing from the age of four. Gradually, she says, the training had become tedious and too intense, made worse by the apparent politics and injustice of the competition, and Heaslip simply couldn’t take it anymore.

This isn’t the scenario normally associated with Irish dancing, and there’s a gentle irony in the fact Heaslip finds competitive athletics almost light relief in comparison. She hasn’t given up completely on her dancing, and spent the summer performing with the Celtic Steps show at the new theatre at Killarney racecourse, but distance running is now unquestionably her thing – and she’s only getting going.

Coming to the end of the 6km race, Heaslip still trailed both Ciara Mageean and Kerry O’Flaherty, both of whom had competed in Rio this summer on the biggest stage of all. Only then, out of the proverbial nowhere, Heaslip appeared to “dance” past them both – and believe me the word is justified.

“My only goal, on the day, was to challenge for the under-23 race,” she says. “I found myself up with the leaders, felt good but still very nervous, wondering will I die. At one point I was running alongside Ciara, thinking “I saw her run on the TV during the summer”, and asking myself should I even be here.

“At the bell lap, we went into the back woods, Ciara slowed a bit, Kerry tore away, so I went with her. By then I was thinking second would be absolutely amazing. Then just before the last hill, I thought, ‘If I try to take her now I might have some chance . . .’ Next thing I’m coming into the finish a few metres in front. Which was just crazy, I know.”

“We’ve always been a very musical family,” she says. “My dad was involved in Irish dancing, when he was younger, my mum, my sister and my cousins, so it was definitely in the genes. And if it wasn’t dancing it was playing an instrument.

“So I’d been dancing since age four up to age 20. I’d qualified for the World Championships every year since age 10, won a world medal in Boston in 2012, and it took me all over the world, really.

“Then I came back from the World Championships in 2013, had ordered a new costume and all, was in class one day and just realised I wasn’t enjoying it anymore.

“It was very intense, and there was a lot more politics involved than people think. You could go out in a competition of 200 dancers, think you’ve danced the best of them, and end up 30th. It’s more about who you are. You can only take that for so long before you get sick of it. And I’d been doing it from age four.

“With running if you’re the best on the day then you’re the first across the line, and no one can take that away from you. It’s much simpler like that, really.”

Still, when Heaslip first broke the news to her mother it didn’t sit very well. “No, she wasn’t happy, but realised too that if I wasn’t enjoying it then it was time to call it a day. But the first thing she says is ‘well, you’re not sitting around on the couch all day – you’re doing something’, and that’s where the running started.

“She was running a bit herself, just for fitness, and had registered for the Rose of Tralee 10km road race. So she asked me out for a run with her, just easy running, then she registered me for the race as well. We started out together, near the back, and then I thought no, ‘feck this’, and took off on my own.”

That was in 2014, and, just a few months later, Heaslip made the Irish under-23 team for the European Cross Country in Bulgaria.

“I wasn’t looking for anything competitive,” she recalls, “as I’d just finished with the Irish dancing. And that was very intense. But Niamh really took me under her wing and straight away I was hooked. And like anyone else, once you start doing well you want to get better. Niamh is also a physio as well as my coach, which is a great help, and she’s also won a ridiculous amount herself over the years. She’s got good advice about everything, not just my running.

“And I’ve no regrets whatsoever about the dancing, though. I got my job out of it, love dancing in the show in Killarney, love the performance aspect of it, but just don’t like competing anymore.”

That competitive instinct, however, remains intact: she’d dabbled briefly in athletics while at school in Mounthawk in Tralee, but never took it seriously, because all through her teenage years the dancing was taking up all her spare time.

“Maybe people don’t realise, I would train very, very hard for the dancing, always doing something. Six days a week. It was probably even harder training than I’m doing now.

She’s proven it on the track, too, finishing second in the Irish senior 5,000m back in June. Her training partners at An Ríocht have helped too, including Laura Crowe, also on the team for Chia.

Heaslip has also completed her Health and Leisure degree at IT Tralee, and is now giving her newfound sport her full attention. What then of her running style? Have all those years of Irish dancing helped her to perfect it?

“It’s definitely been beneficial,” says Heaslip. “I think there is a rhythm to the running that is similar to dancing, and it makes you light on your feet, and maybe a gutsier runner, and that comes from the dancing as well.

“In dancing you have to go out and perform, you can’t hang back, you have to go for it. Which is why I’m so looking forward to the Europeans now. I can’t wait.”