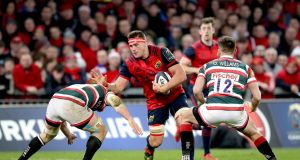 To paraphrase the 32nd American president, Franklin D Roosevelt, “the only thing that Munster have to fear is fear itself,” when they try to beard the Leicester Tigers for the second time in a week.

That’s not to dismiss or demean the challenge of Leicester, one of the great European clubs. They will bristle in a bid to exorcise that 38-0 drubbing at Thomond Park last weekend, now that they are finally afforded an opportunity after what must have felt an eternity.

In years gone by, the Tuesday afternoon contact sessions on the training ground in Oadby were notoriously uncompromising; blood, sweat, and punch-ups. There may have been a slight reprise this week but the English club will have to bring so much more than just aggression; that alone won’t suffice.

It was interesting to note the words chosen by England and Leicester scrumhalf Ben Youngs during the week when he ventured that the Tigers “have to put some pride back in the jersey”, a noble sentiment but shallow unless substantiated by more tangible qualities, like an effective gameplan.

Munster are unrecognisable from the side that were soundly beaten home and away by the Tigers at this stage of last season’s tournament. The metamorphosis has taken place over a relatively short space of time, seven games to be precise: two Champions Cups matches, four in the Guinness Pro12, and a victory over the New Zealand Maoris.

The confidence gleaned from that unbeaten sequence is evident in the collective body language. The Munster coaching team, led by Rassie Erasmus, has instilled focus, determination, precision, belief and organisation and within those parameters individuals have blossomed.

Tyler Bleyendaal has marshalled affairs beautifully in his role as a playmaker, putting the team in the right places on the pitch and bringing a nuance and intelligence to the patterns.

Jaco Taute, illegally denied a hat-trick last weekend in Limerick but whose two tries nudged his side towards the bonus point, is a perfect streetwise foil in midfield for the burgeoning talent of Rory Scannell. Darren Sweetnam has been exceptional, so too John Ryan and Niall Scannell in a more earthy way.

In sifting through the remnants of last weekend’s match, a number of things stand out. Discipline in particular. Munster conceded just five penalties, while Leicester transgressed 11 times and lost three players to yellow cards. The Irish province will need to replicate those figures.

Munster dominated possession and territory, something they won’t expect to repeat at Welford Road, but it’s how ruthless and precise they are with the ball that will determine their fate.

Another aspect that was game-defining at Thomond Park was the fact that Munster missed just two of 87 tackles; a staggering completion rate and one for which defence coach Jacques Nienaber deserves credit.

That statistic alone will be a concern for Richard Cockerill and his Leicester team because the home side has to find a way to be more creative. There are three changes and a positional switch to the starting team, with Owen Williams moving from centre to outhalf.

Jack Roberts joins Manu Tuilagi in midfield, South African Pat Cilliers comes in at tighthead prop and Luke Hamilton to the backrow. Leicester will look at the scrum as an avenue of opportunity, heartened by last weekend, but there are precious few other areas to draw comfort.

Welford Road is one of European noisiest and most claustrophobic rugby cathedrals but like others relies exclusively on the Tiger-shirted celebrants on the pitch to lead the choir. Leicester will be physical, aggressive and direct, looking for a fast start and cheap points.

They have lost just one of their last 33 matches in Europe on home turf but the only team to turn them over twice in the tournament at Welford Road is Munster. The challenge for the visitors in the battle of wills is to stay resolute mentally and physically.

Munster are the better team at the moment and if they retain the integrity and courage with which they’ve played over the past couple of months, they will prove that this afternoon.