Leinster should cruise against apathetic Northampton 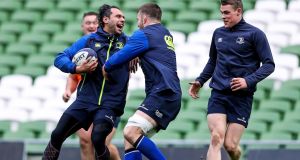 Leinster’s sa Nacewa with Sean O’Brien during the Captain’s Run ahead of their European Champions Cup clash with Northampton Saints. Photo: Tommy Dickson/Inpho

Some men will say anything under duress only to do anything but.

“You look back on games like that to show everything is possible,” said Jim Mallinder, on promotional rather than coaching duty this week, right before naming a dud starting XV to travel to Dublin.

Mallinder was referring to Northampton’s 18-7 victory at the Aviva stadium in 2013, just eight days after Leinster’s 40-7 pasting at Franklin’s Gardens.

“The last few games we have not been playing quite as well as we want but we are still a good side and if you look around that changing room, we have got lots of good players and we just need to pull it together.”

Translation: to hell with Europe, it’s out of reach, and I’ve a job to salvage.

Mallinder has put the mainstays of this team in cold storage. Not all of the decisions were his choice, but most are, as George North, Dylan Hartley, Tom Wood, Louis Picamoles, Luther Burrell, Ben Foden and Courtney Lawes go absent on Christmas leave.

“There is a feeling that we can [pull it together] and it starts this weekend,” Mallinder continued. “We want to go out there, we know Leinster are good and it is going to be tough playing in the Aviva Stadium but we need to build on our performance and then keep that going for the next three weeks because then we have three massive league games.”

Ah, there you go, some truth sprinkled on the party line. Sale, Gloucester and Bristol are winnable games. Leinster in Dublin is not.

At least, from an Irish perspective, JJ Hanrahan – reportedly heading back to Munster next summer – has recovered from an ankle injury to start only his third game of the season. The Kerry man’s left handed pass for the Saints only try last week was a stark reminder of his unseen skills these past two years.

“A relatively straight forward op” but an operation all the same.

Shame for him but Ross Byrne has craved this opportunity for some time, having waited in line behind Johnny Sexton and Cathal Marsh before the rise of Joey.

It’s worth noting that Carbery had to switch from UCD to Clontarf to be guaranteed game time in the 10 jersey as the steady hand of Byrne was on the Students tiller.

Dan Leavy, arguably the best player from that rugby nursery in recent seasons, can’t even make the Leinster replacements as Rhys Ruddock and Jack Conan refuse to give way. Max Deegan gets added to this conversation soon enough.

In the meantime, a backrow of Sean O’Brien, the outstanding Josh van der Flier and Jamie Heaslip are expected to shred the Saints at both breakdown and gainline.

Zane Kirchner starts at fullback instead of the injured Rob Kearney.

Also, everyone can see the Robbie Henshaw-Garry Ringrose midfield partnership is nearing world class status, and Jared Payne’s kidney injury should see it transferred on a more permanent basis to Ireland come the Six Nations.

That alone makes this fixture worth a look.

But Northampton, not unlike Leicester in Limerick last Saturday, travel with a team that should be niled. Instead of the 38 points Munster put on a somewhat under strength Tigers, the festive Aviva stadium will expect Leinster to click over the half century.

Mallinder, clearly intent on saving his job via a rejuvenated Premiership campaign (currently they are ninth with four wins from 10 matches), waves the white flag by leaving out Wood, Lawes and Picamoles.

Pool 4 had a daunting look about it initially but Castres will probably take a knee in January while Montpellier at home are very beatable.

So a Dublin quarter-final is very attainable. Further motivation to bank the bonus point. Early.