Patrick Madden at the Aviva stadium 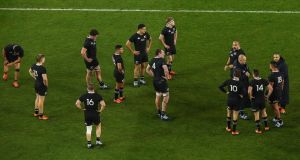 The stands had barely emptied at the Aviva stadium before the mind games started afresh in the bowels deep below.

All Blacks coach Steve Hansen – perhaps with tongue firmly in cheek – wasted no time in labelling Ireland favourites for next year’s Rugby World Cup, after their historic 16-9 win in Dublin.

Saturday night’s Test brought together the world’s first and second-ranked sides. The match, and the statistics, showed the gap between Ireland the All Blacks has never been as small.

The margins were miniscule, with Jacob Stockdale’s stunning second-half try winning the day for Joe Schmidt’s side.

And when he was asked afterwards if Ireland’s victory meant they were now in the driving seat to prize All Blacks hands off the Webb Ellis Cup, Hansen’s reply was almost devilish.

He said: “If you want to make them favourites go ahead. What it [Ireland’s win] does do I think, and I said this at the start of the week; you’ve got the two best sides in the world playing each other – so as of now they’re the number one team in the world, and I guess they are favourites [for the World Cup].”

But while the numbers were largely even on an epic night, where Ireland’s scrambling defence almost defied logic and helped keep the resurgent All Blacks at bay in the final quarter, one figure will have alarmed the Kiwi coach.

Indeed, New Zealand shipped 11 penalties to Ireland’s five – nine of them conceded in the first half – and Hansen was left to rue his side’s indiscipline.

“Firstly I’d like to congratulate Ireland who I thought played outstandingly well,” he said. “They deserved the win, they took the opportunities they got – there weren’t a lot in the game – they took their one and we just didn’t take ours.

“I thought our discipline in the first half let us down a wee bit, but in saying that, I’m very proud of our team too. They showed a lot of courage and heart and you couldn’t fault the effort, even if the execution wasn’t as good as we’d have liked. The effort was world class and we just got beaten by a better team.

“Some of the penalties in the first half were just dumb. Was that because we made a mistake and then tried to fix it? I’m not sure, but they were avoidable penalties. We’ll give ourselves an uppercut for that and go away and work on it.”

As the All Blacks worked their way back into the game in the second-half, seeing more possession and gaining more territory as the clock passed the hour mark, the tension around the Aviva was palpable.

Ireland had been here before. Memories of 2013, of Ryan Crotty’s late score, were bubbling away at the surface. Only this time, they held on.

But were the All Blacks guilty of chasing the game too early? Hansen said: “I think it’s easy to sit here and say that. Under the circumstances of the game . . . there was a lot of pressure coming from both teams.

“You’ve got to try and take every opportunity that comes. Sometimes that forces you to make a poor decision and our decision making wasn’t as good as it could have been, but you can’t fault the effort. We just got beaten by the better team on the night.”

One golden All Blacks chance fell to All Blacks skipper Kieran Read, who charged down a Jacob Stockdale clearance in the second-half only to fumble the loose ball with every green shirt behind the play.

Ahead of Saturday night’s game Read had echoed Schmidt’s sentiments that it would be a “spiky” encounter – and afterwards the Kiwi number eight confirmed it didn’t disappoint on that front.

“I think both teams were very physical. You saw by the defence from both sides, getting off the line. As Steve said really it only came down to a few opportunities. They took their one to score and we didn’t so.

“It was a tight game. The tough thing is sometimes, particularly in the second-half when you can’t get a flow in the game. There were a lot of stoppages which affects the flow and slows the game down. It certainly wasn’t as quick [as a Rugby Championship fixture], but it was very physical.”

And on a night for taking chances, Ireland and Stockdale took theirs. Bundee Aki took a reverse ball from Sexton off a lineout – a move straight from the training ground – and found the Ulster winger, who chipped ahead and outpaced Aaron Smith to the line.

Could the All Blacks have done anything better to stop the score? “I got put on my arse in the lineout so I obviously can’t remember too much of it,” said Read. “It was just a great play from Ireland I guess, he showed his pace and got there.”

The All Blacks aren’t used to losing, and this was only the second time they have failed to score a try since 1995 – with the Lions shutting them out last year.

And, according to Hansen, Ireland’s win can provide the world champions with some vital lessons, as Japan looms large.

“It will be very useful, there’s no doubt about that. This team hasn’t suffered much in its tenure over the last three years.

“We’ll go away, we’ve got a game next week [against Italy]so we’ve got to get our feet back on the floor, get back into our work and learn from it.”