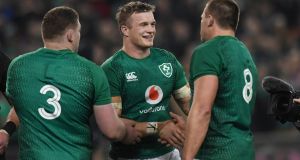 The world sat up and took notice as Ireland beat the All Blacks 16-9 on Saturday, their first win over New Zealand on home soil in 113 years of trying.

Defeat for the back-to-back world champions at the Aviva Stadium prompted Steve Hansen to say Joe Schmidt’s side can now be recognised as the best team on the planet - even if the official rankings say otherwise.

Hansen was magnanimous in defeat, saying his tourists were beaten by the better team on the night, and the All Blacks coach wasn’t the only one full of praise for Ireland’s history boys after their famous win in Dublin.

Indeed, in the Sunday Times (UK), Stephen Jones writes: “Ireland took rugby’s globe and set it spinning, in an awestruck Dublin last night. They took notions of All Black infallibility and tore them to shreds.

“The World Cup may or may not have been turned on its head, but one thing is certain. Ireland know they can and should beat New Zealand; it is now Steve Hansen and the Kiwi coaches who have to catch up with Joe Schmidt, Andy Farrell and the Irish masterminds.”

Jones’s view is one which is echoed by much of the British press. From the Aviva Stadium, The Observer’s Robert Kitson writes: “Brutal does not even begin to describe the contest but, for Ireland, the outcome was as beautiful as any in their rugby history.

“If New Zealand are still officially the world’s best team, it did not particularly feel that way at the final whistle.”

Also in The Observer, Andy Bull paid tribute to the Irish 23 on a night when every player in a green shirt delivered a performance to be proud of: “During the All Black haka, Ireland’s players lined up shoulder to shoulder and took a step forward together, to meet the challenge.

“That set the tone for what was, as Schmidt said, one of the great collective performances. You can’t start name-checking the standout Irish players without running through the entire side.”

Elsewhere, in The Independent (UK), Nick Purewal was another to herald Ireland on a night when Jacob Stockdale’s well-worked and expertly taken try proved the difference.

“And after passing this unremitting challenge against the back-to-back world champions, few could argue if they do. This was boss Schmidt’s men at their gritty, canny and brutal best,” he writes.

“All Blacks chief Hansen warned his side not to fall for any of Schmidt’s special moves, but that’s exactly what happened for Stockdale’s winning score.”

Meanwhile, in The Daily Mail, Will Kelleher suggests Saturday night’s result was not just monumental for Ireland but is a shot in the arm for rugby itself.

“This result will reverberate around the world, and so it should. Ireland are world beaters. They have now sent the All Blacks packing twice in two years - no northern hemisphere side has done that since England were on the march to their World Cup win.

“With this win, Ireland have truly arrived. A genuine contender to All Black dominance his finally emerged.”

“The rugby world has shifted on its axis,” he writes.